A 6-month-old boy was hospitalized because of fever and suspected central line sepsis. He had been receiving total parenteral nutrition (TPN) since shortly after birth following a small-bowel resection, which was performed to repair a midgut volvulus. Abdominal ultrasonographic findings after the procedure were normal. The infant was born at term after an uneventful pregnancy and delivery. Alkaline phosphatase and γ-glutamyl transpeptidase levels were elevated, without hyperbilirubinemia. An ultrasonogram showed hyperhomogeneous and nonhomogeneous echogenicities of the liver, consistent with fatty changes and fibrosis (A). 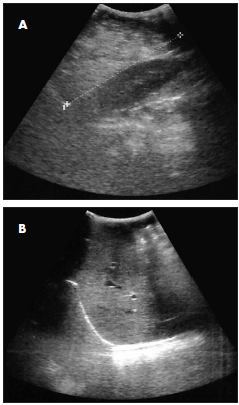 Prolonged TPN can result in various complications that affect the liver and biliary system. Cholestasis is the most common and predictable TPN-associated hepatobiliary dysfunction in children. TPN-associated liver disease is more common in patients with a short bowel (remnant less than 50 cm)1,2; this infant’s bowel remnant was 25 cm. Sepsis is also a factor in the pathogenesis of TPN-related liver disease. In some patients, TPNinduced cholestasis may progress to cirrhosis, liver failure, and death.3 The disorder is reversible when TPN is discontinued, provided enteral feeding is started before irreversible liver damage has occurred.3

Many factors are thought to contribute to TPN-associated liver disease. A French study found a strong association between liver disease and a parenteral lipid intake of greater than 1 g/kg/d.1 One possible explanation for a lipid-related toxic effect is the presence of phytosterols in lipid solutions. Different lipid solutions appear to have different toxicities, even when the basic ingredients of soy oil and egg phospholipid are the same.

However, factors other than the lipid content of parenteral nutrition are thought to contribute to TPN-associated liver disease. Current research is focused on hepatic transsulfuration pathways. Methionine is the only sulfur(-containing amino acid in most parenteral formulations; other sulfur-containing amino acids are relatively insoluble and difficult to incorporate. Methionine delivered systemically, rather than via the physiological portal route, is disproportionately transaminated to mercaptans. Therefore, hepatic transsulfuration to S-adenosylmethionine and critical downstream products—including choline, lecithin(, carnitine, cysteine(, glutathione, and taurine—is shortchanged. Patients receiving TPN have shown depleted levels of these transsulfuration pathway products, all of which have important functions in mobilizing fat and synthesizing lipid membranes with receptor and transport functions for the secretion of bile.

Recommended methods for preventing TPN-associated liver dysfunction include limiting the duration of TPN, starting enteral feeding early, avoiding overfeeding, and vigilant prevention and prompt treatment of sepsis. 3 Prophylactic administration of ursodeoxycholic acid( may be beneficial; however, its role in the treatment of TPN-associated cholestasis requires further study.4