A 62-year-old G3P2AB1 white female was seen in the emergency room with intense right, lower quadrant pain. She graded the pain as an 8 out of 10. She admitted that this pain was intermittent and she had been having it for several months before presentation. She denied any vaginal bleeding and was in a monogamous relationship.

The patient had visited urgent care within the last month. A CT scan of the pelvis showed a 4 cm cystic/solid mass behind the uterus. Her CA 125 was normal at 19.

Physical examination. She was laying on her right side in the fetal position. Vital signs showed an elevated pulse and blood pressure, but otherwise normal findings. During the exam, the pain subsided and a pelvic exam was performed. There was some cervical motion tenderness and fullness in the right side. An ultrasound was ordered.

Laboratory tests. Urine pregnancy test was negative. White count and hemoglobin was normal as well. Cultures obtained included vaginal screen and testing for gonorrhea and chlamydia—all of which were normal. 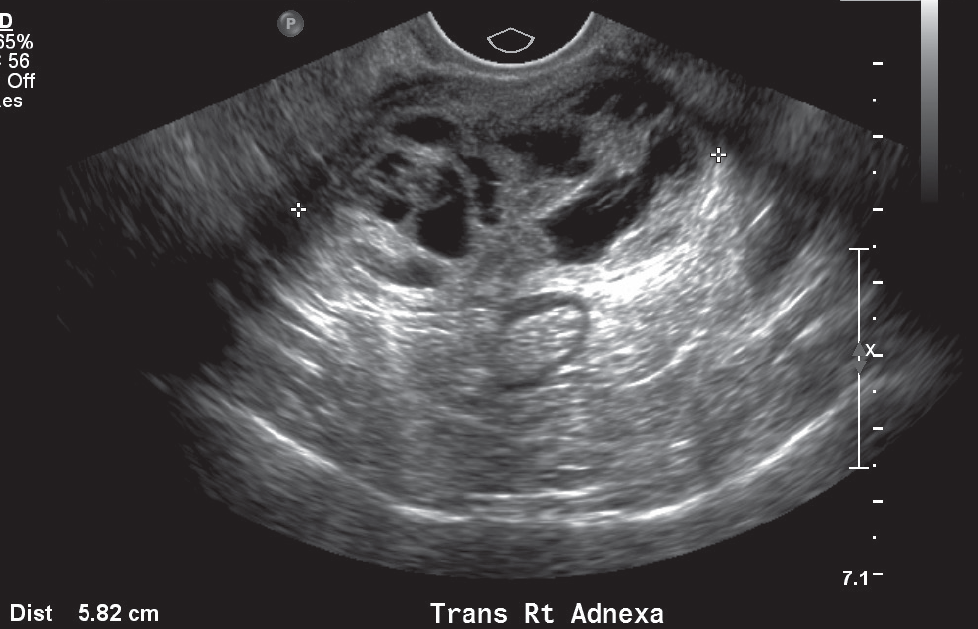 Outcome of the case. The patient underwent an exploratory laparotomy; a right adnexial mass was seen torsed in the right broad ligament and removed. Tests found it to be a benign organized cystic lesion negative for atypia or malignancy.

A total abdominal hysterectomy was then performed. The patient did well postoperatively and scheduled a 2-week follow-up. The final path report was reviewed and the mass contained ghosts of villous-like structures.

Differential diagnoses include benign teratoma or dermoid with torsion effects.

The patient was questioned about past pregnancy loss, and she shared that she had previously had a miscarriage with bleeding, but no fetal tissue had passed. There was an increased likeliness that the miscarriage was actually an ectopic pregnancy, which would be consistent with our finding of retained tubal pregnancy.1