A 10-year-old girl with moderate bilateral sensorineural hearing loss was seen in the otorhinolaryngology clinic for a follow-up visit. She wore her hearing aids regularly, both in school and at home.

Her mother reported that her daughter had been complaining for several weeks of fullness of the left ear, “like something is blocking it,” but the sensation did not interfere with her wearing the hearing aid. She denied pain or fullness in her ears during the visit.

On physical examination, the girl’s left ear canal was completely occluded with a gray, rubbery object with a rectangular recess in the center. The examining physician, who also is a hearing aid wearer, recognized the foreign body as the connector side of an open hearing aid dome. The mother reported that the dome had “gone missing” from the girl’s hearing aid approximately 2 weeks previously; she replaced it with a new one, and her daughter continued to wear the amplification device. 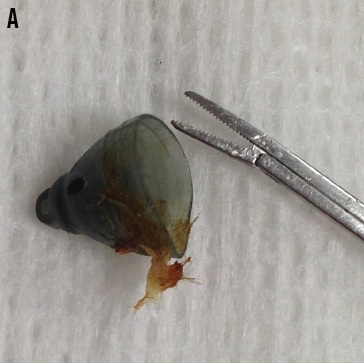 The dome was visualized with lighted direct otoscopy and removed easily through an otoscope speculum with Hartman alligator forceps (A). The external auditory canal and the tympanic membrane showed no signs of inflammation.

A foreign body in the external auditory canal, even a retained item, can be symptomatic or asymptomatic, and it may be discovered incidentally during examination.1

Persons with mild to moderate hearing loss who use hearing aid amplification often have open dome (nonocclusive) tips on their hearing aids (B), allowing them to take advantage of natural hearing in addition to amplified sound. These dome tips, unlike more rigid occlusive molds that fill the entire ear canal, are soft and compliant, and a wearer may not feel it if one becomes stuck accidentally in the ear canal. 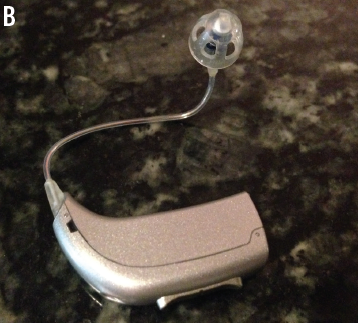 Removal of some retained foreign bodies in the ear canal is fairly straightforward under direct visualization, particularly objects that are easily grasped, such as foam rubber, paper, or vegetable matter.2

Removal of objects that are not graspable, such as smooth or spherical objects like pebbles and beads, can be more difficult and can be associated with complications.3 Removal of such objects in most cases should be handled by a trained practitioner such as an otolaryngologist.

When deciding whether to refer a patient to a specialist for removal of a foreign body in the ear canal, it is worth noting that rates of successful removal can drop significantly after a failed first attempt.4

treatment
treatment
Exacerbations Increased After Discontinuing Long-term Use of Mepolizumab for Severe Eosinophilic Asthma
While the long-term safety and efficacy of mepolizumab have been studied, gaps in the literature have remained on the clinical impact of stopping mepolizumab after long-term use. Researchers examined how...
computed tomography
computed tomography
FDA Cleared New CT Imaging Technology, Method
The US Food and Drug Administration has cleared a new method for computed tomography (CT) imaging, in addition to a recently cleared new biomedical imaging technology.
Lyme Disease
Lyme Disease
Lyme Disease Cases Significantly Increased Over Last 15 Years
In the United States, the prevalence of Lyme disease cases continues to grow in certain parts of the country causing an increased public health concern.
immunology
immunology
Increased Levels of Platelet-Related miRNAs Associated With Severe AD
Researchers examined the relationship between plasma and the severity of atopic dermatitis.
risk management
risk management
COVID-19 Roundup: Variant Component in Boosters, Damage to Cardiac Muscle, Hypertension Risk
In this COVID-19 roundup, coverage includes the addition of an Omicron variant component to future vaccine boosters, the relationship between a COVID-19 infection and damage to heart muscle, and how...