At 27 weeks’ gestation, a female fetus was found to have left hydronephrosis that was consistent with a left multicystic dysplastic kidney (ver

sus ureteropelvic junction obstruction with a perinephric urinoma). On the right, ultrasonography (US) showed a cystic dysplastic kidney with cortical thinning but with preserved corticomedullary differentiation, and with caliectasis but not pelviectasis (Figures 1A and 1B). 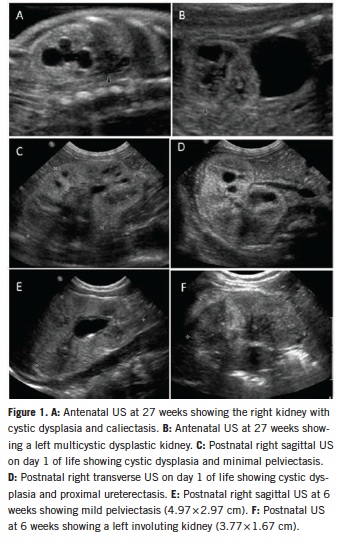 At birth, the girl’s creatinine clearance was 1.1 mg/dL. There was no evidence of obstruction, and she remained clinically stable, with adequate urine output. Her creatinine level peaked at 3.3 mg/dL on day 6 of life. Nephrology consultants monitored her fluid balance and electrolytes, and there was no indication for renal replacement therapy. When her creatinine level had decreased to 3.1 mg/dL, she was discharged home.

At the girl’s 6-week follow-up appointment, US still showed bilateral diffuse renal dysplasia and increased echogenicity, but the overall results had improved from those of earlier studies (Figures 1E and 1F). By 3 months of age, she was growing and thriving, her creatinine level had fallen to 0.5 mg/dL, and a voiding cystourethrogram was negative for reflux.

At 8 months of age, however, the infant presented with acute-onset emesis and abdominal pain manifested by inconsolable fussiness and pulling her knees to her chest. Evaluation revealed an elevated creatinine level of 2.8 mg/dL. Renal bladder US demonstrated a stable, cystic- and dysplastic-appearing right kidney with stable mild pelviectasis. Full gastrointestinal evaluation findings were normal. She improved with hydration, her creatinine dropped to 1.1 mg/dL, and she was discharged.

Two days later she returned with similar symptoms. Renal bladder US now showed abdominal and retroperitoneal fluid with stable mild right pelviectasis (Figure 2A). Her creatinine had fallen to 0.7 mg/dL. Noncontrast computed tomography scans of the abdomen and pelvis confirmed the presence of perinephric fluid and peritoneal fluid (Figures 2B and 2C). 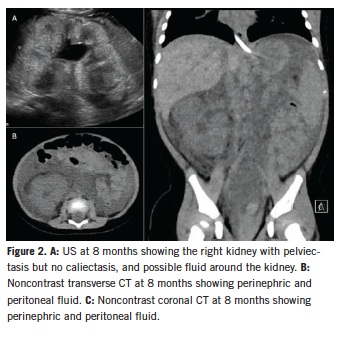 During the 16-hour duration of her evaluation, her creatinine level rapidly rose to 1.6 mg/dL, and she became anuric. This change in clinical course, combined with the perinephric fluid collection, raised concern for obstruction with a perinephric urinoma. She was taken to the operating room urgently for stent placement and retrograde pyelography, which showed a long segment of narrowed proximal ureter entering an entirely intrarenal pelvis. A wisp of contrast laterally suggested a forniceal rupture (Figure 3). After stent insertion, the girl developed significant postobstructive diuresis of greater than 9 mL/kg/h; ultimately, her creatinine level returned to a baseline of 0.4 mg/dL.

Six weeks later, the patient underwent renal exploration and a dismembered pyeloplasty for a long intrarenal segment of narrowed proximal ureter. At her 5-month postsurgical follow-up, she had only mild pelviectasis, and her creatinine level had stabilized at 0.5 mg/dL. 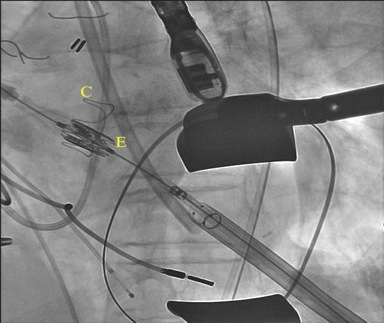 Because of her cystic, dysplastic right kidney with an entirely intrarenal pelvis, the obstruction of the renal unit was not apparent on routine imaging. The presence of mild pelviectasis would not raise concern for a functional obstruction in an anatomically normal kidney. But this patient’s case highlights the importance of a high index of suspicion for obstruction and close follow-up when pelviectasis is present in a patient with an abnormal kidney.