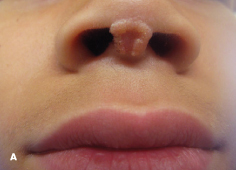 An 8-year-old boy was referred by his plastic surgeon for evaluation of a 1.5-cm verrucous plaque on his columella (A). The plastic

surgeon had considered excising the wart, which had failed to resolve after 11 cryotherapy treatments and application of salicylic acid. However, the child and his parents refused surgery and more cryotherapy as well as any treatment that would cause pain. We therefore treated him with oral cimetidine, 400 mg tid, and imiquimod 5% cream twice weekly. After 6 weeks, the wart was much smaller but still present. He was then instructed to use the imiquimod for 5 to 7 days a week, although he used it about 4 times per week. Six months later, the wart had completely resolved (B). 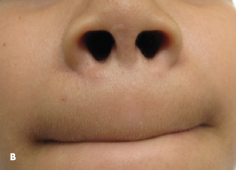 Warts are generally asymptomatic proliferations of skin and mucosa caused by human papillomavirus (HPV). They are occasionally resistant to treatment; in rare instances, they can persist for months or years. Over 100 subtypes of HPV have been described, and each subtype is associated with different regional predilections. HPV 2, 4, 27, and 29 are the most frequent causes of common warts.1

Numerous treatments of warts exist, but none is universally effective. The most common treatments include salicylic acid therapy, cantharidin, Candida antigen, tretinoin, cryotherapy, and laser. For cases that are refractory to first-line therapy, a number of alternative treatments are available, 2 of which include imiquimod and cimetidine.2 Multiple studies have shown that
application of imiquimod 5% cream with occlusion can result in cure rates as high as 80%. The only significant adverse effect is local irritation.2 There is conflicting evidence regarding the efficacy of cimetidine in treating warts.

One placebo-controlled double-blind study of cimetidine showed no statistically significant improvement in outcome, with a complete response in 26.3% in the cimetidine group and 4.8% in the placebo group (P = .085).3 Patients younger than 16 years were excluded from the study. Interestingly, the experimenters noted that responders tended to be younger than nonresponders.3 This latter finding is similar to that of Orlow and Paller4 who treated 32 children (ages 3 to
16 years) with cimetidine for refractory warts. After 2 months, 81% had complete remission. About two-thirds of these patients were concurrently treated with a topical antiwart medication, most frequently salicylic acid—another difference from the previously mentioned study.4 Several randomized controlled trials have failed to show efficacy when cimetidine is compared with
placebo, thus there remains limited data to support its routine use.5

We have had several cases in which cimetidine has been a useful adjunct in the treatment of challenging warts. Adverse effects of cimetidine are generally mild. It is important to note that cimetidine does inhibit the cytochrome P-450 system. It has also been reported to cause gynecomastia due to antiandrogenic effects.6 ■