Reducing the Inappropriate Prescribing of Antibiotics for Rhinosinusitis

ABSTRACT: The inappropriate prescribing of antibiotics for symptoms of rhinosinusitis is prevalent in the United States. A survey was conducted to explore the difference in perceptions about expectations for an antibiotic prescription between patients presenting with rhinosinusitis symptoms to urgent care clinics and the health care providers at the clinics. When urgent care providers were surveyed, 100% of them believed that patients with sinusitis symptoms expected antibiotics. In the same setting, a survey was given to adult patients presenting with symptoms of sinusitis asking whether they thought antibiotics were needed that day. Of these patients, 76% believed that they needed an antibiotic for the symptoms they reported. The difference in expectations about antibiotic prescriptions shows a potential area for providers to improve practice by reducing the inappropriate prescribing of antibiotics.

Acute bacterial rhinosinusitis (ABRS) affects 1 in 7 adults in the United States, resulting in approximately 31 million individuals receiving the diagnosis each year.1 The annual cost of treatment for ABRS in the United States is approximately $2 billion.2 The National Ambulatory Medical Care Survey lists sinusitis as the fifth most common U.S. diagnosis for which an antibiotic is prescribed.3 The problem is not limited to the United States—for example, researchers in the Netherlands found that general practitioners overestimate upper respiratory symptoms and patients’ expectations when prescribing antibiotic therapy in primary care.4 Similarly, U.S. clinicians in 2011 prescribed 262.5 million courses of antibiotics (representing 842 prescriptions per 1000 persons), with family practitioners having prescribed the most antibiotic courses.5

Moreover, the increasing prevalence of antimicrobial-resistant bacteria is a global public health challenge that has accelerated as a result of the overuse and inappropriate prescribing of antibiotics worldwide.6-11 Numerous studies suggest that antibiotics are overly prescribed and ineffectively prescribed for viral infections rather than bacterial infections.11-13

These and other findings and observations demonstrate a need for more-precise interpretation of symptoms for antibiotic treatment and improved patient-oriented consulting skills to support the prescription of antibiotics.4,5

Patients’ perception of what they need for treatment predisposes them to expectations about the provider’s diagnosis, treatment plan, and prescriptions. Filipetto and colleagues14 found that 70% of 98 patients surveyed thought that viral infections require antibiotic treatment and that 86% to 92% thought that yellow nasal discharge or coughing up yellow mucus requires antibiotic therapy. These perceptions can influence patients’ expectations about treatment. Understanding these perceptions might improve patient and provider communication and decrease the inappropriate prescribing of antibiotics for ABRS.

The American Academy of Otolaryngology–Head and Neck Surgery1 and the Infectious Disease Society of America15 have developed separate clinical guidelines for the diagnosis and treatment of ABRS. These guidelines recommend that any of the 3 following clinical presentations be used to identify patients with ABRS: (1) symptoms lasting for 10 days or more and not improving; (2) symptoms that are severe, including fever of 39°C or higher, nasal discharge, and facial pain lasting 3 to 4 days; or (3) worsening symptoms with new fever, headache, or increased nasal discharge, typically after a viral upper respiratory infection lasting 5 or 6 days after initially seeming to improve. According to all guidelines, the ABRS diagnosis requires the presence of 1 or more of these 3 presentations.

For the otherwise healthy patient, treatment of ABRS consists of symptomatic relief with decongestants, nasal washes, and if necessary, pain control with nonnarcotic analgesics such as acetaminophen or ibuprofen.15

The most common organisms that cause bacterial ABRS are Streptococcus pneumoniae (38%), Haemophilus influenzae (35%), and Moraxella catarrhalis (16%).

In 3 urgent care practices in 3 medium size cities in New York’s Hudson Valley, 11 health care providers (physicians, nurse practitioners [NPs], and physician assistants) were surveyed about their awareness of ABRS clinical guidelines and whether they thought patients presenting with sinusitis symptoms expected antibiotics (Figure 1). All providers were aware of the current clinical guidelines, and all answered that they believed that patients with these symptoms expected an antibiotic prescription. For patients presenting with ABRS symptoms, all providers stated that they would give an antibiotic prescription. Some of the reported reasons included a lack of time to explain why antibiotics are not needed, a provider perception that patients wanted an antibiotic, and a desire to please patients.

In the same setting, 115 adult patients presenting with sinusitis symptoms were given a survey about whether they thought antibiotics were needed for their symptoms (Figure 2). The sample comprised 42 men and 73 women, mostly white, between the ages of 31 and 40 years, and most with an undergraduate educational status. The most important finding was that 76% (n = 73) of patients surveyed indicated that they thought they needed an antibiotic for their symptoms that day (Figure 3). 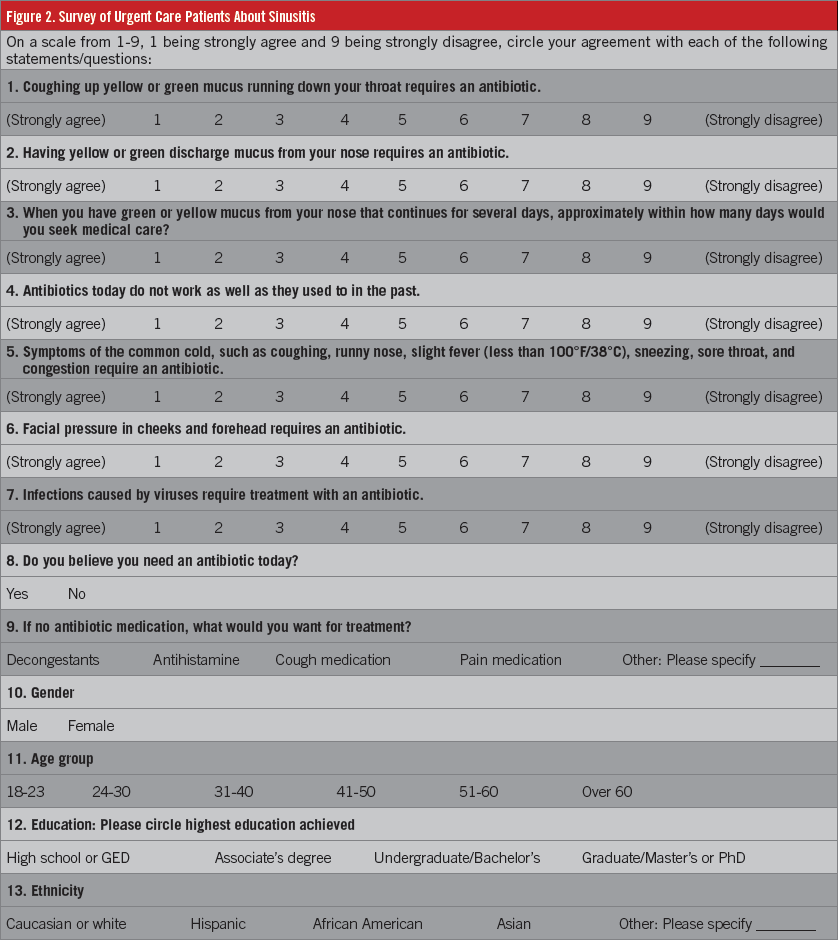 Patients were asked about their symptoms and what their perceptions were if an antibiotic were needed. In total, 21% (n = 24) believed that coughing up yellow or green mucus that was running down the back of the throat required an antibiotic, 18% (n = 18) believed that having yellow or green mucus discharge from the nose required an antibiotic, 22% (n = 25) agreed that antibiotics do not work as well today as they did in the past, and 45% (n = 52) reported that they wait 4 to 6 days before they seek medical care when they have green or yellow mucus from their nose. 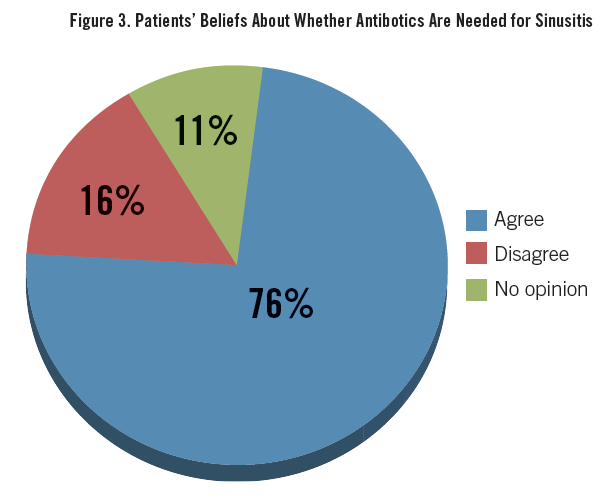 Filipetto and colleagues14 found that 70% of patients with symptoms of upper respiratory tract infection thought that viruses require antibiotic treatment, and that 90% of patients thought that yellow nasal discharge or coughing up yellow mucus required treatment with an antibiotic. This patient misconception may influence patient expectations about treatment, whether the illness is viral or bacterial. Akkerman and colleagues4 found that a shared perspective between patient and provider is positively associated with several factors, including resolution of problems and symptoms and patient satisfaction with the provider and the clinical encounter. Other factors included patient trust in and endorsement of the provider’s recommendations, adherence to treatment, and the patient’s assessment of self-management and self-efficacy. The providers’ perceptions of patients’ expectations play an important role when prescribing antibiotics that are not indicated according to published ABRS guidelines.

The results of one multicenter study17 of 3402 patients and 387 health care providers showed clear evidence that patient expectations and hopes for antibiotics, and especially clinician perceptions of these views, are independent predictors of antibiotic prescribing. Patients expecting antibiotics and hoping for them were prescribed antibiotics more frequently than those who were not, with an odds ratio (OR) of 2.08 (95% confidence interval [CI], 1.48, 2.93) for those expecting them and an OR of 2.48 (95% CI, 1.73, 3.55) for those hoping for them. There was no statistically significant association between patients asking for antibiotics and having been prescribed them (OR, 0.61; 95% CI, 0.36, 1.04). Clinician perception that patients wanted an antibiotic significantly influenced antibiotic prescribing (OR, 12.18; 95% CI, 8.31, 17.84). Patient perception was not associated with illness severity; therefore, patient perception is a poor predictor for prescribing antibiotics. These findings showed that clinicians were not correctly assessing patient views on the use of antibiotics.17 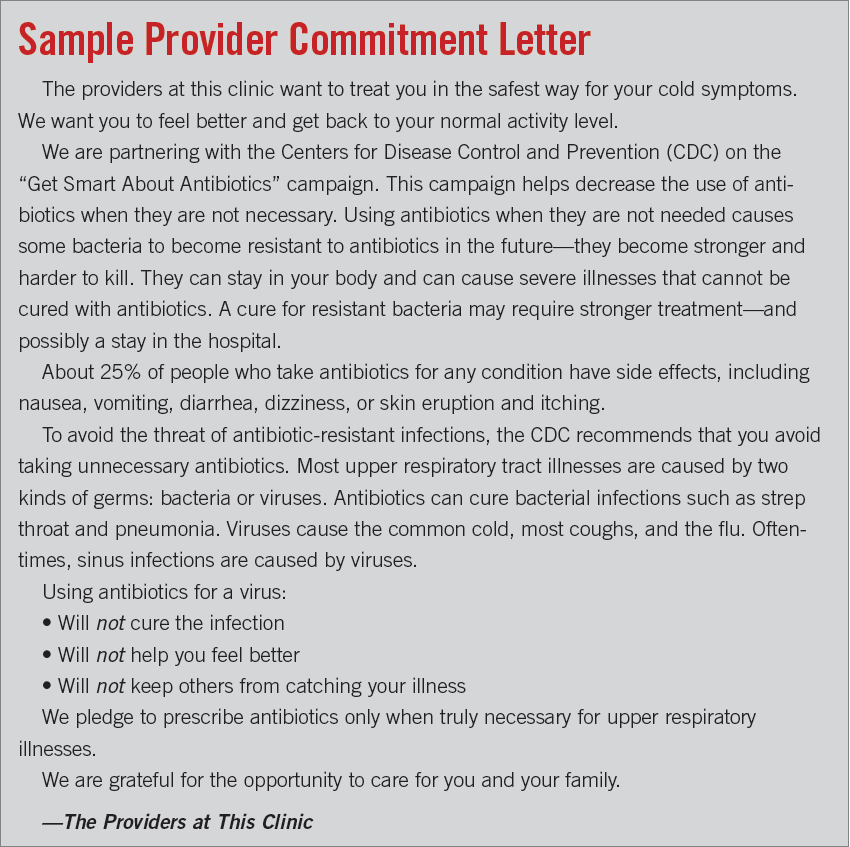 Two meta-analyses enrolling a combined total of 6424 participants reported on the adverse effects of antibiotic treatment for acute sinusitis. Adverse effects, primarily diarrhea, were 80% more common in the antibiotic groups compared with the placebo groups and were reported among 30% to 74% of patients treated with antibiotics.18,19 Other commonly reported adverse effects included cutaneous eruption, vaginal discharge, headache, dizziness, and fatigue. 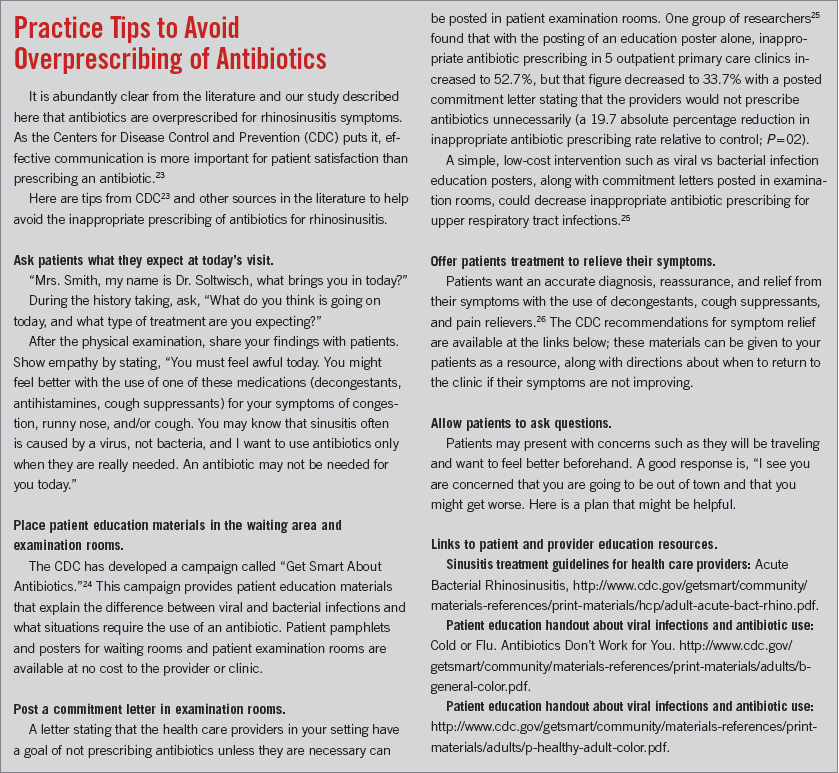 Smith and colleagues21 compared 4 meta-analyses enrolling a total of 9744 patients, published within the last 10 years and summarizing the results of randomized controlled trials comparing the effects of antibiotics with placebo for acute sinusitis. The included trials selected patients using inclusion criteria that increased the likelihood of bacterial sinusitis rather than viral sinusitis, such as more-severe signs and symptoms, longer duration of symptoms, and abnormal findings on radiographs or computed tomography scans. At 7 to 15 days after beginning treatment, cure or improvement was statistically significantly higher in the antibiotic groups compared with placebo groups, but the differences between the groups were small. Rates of cure or improvement in the placebo groups ranged from 64% to 80%, compared with 71% to 90% in the antibiotic groups. The difference in cure or improvement rates between the placebo and antibiotic groups ranged from 7% to 14% higher in the antibiotic groups. The rate of complications and recurrence did not differ between groups.

The authors of another meta-analysis22 found that older patients, those with more severe ABRS signs and symptoms, and those who reported a longer duration of symptoms took longer to cure but were no more likely to benefit from antibiotic treatment than were patients in other populations.

Results from a multimethod comparative case study12 including patients (children and adults) and clinicians in 18 family practices in a Midwestern state found that antibiotics were prescribed in 68% of outpatient visits (n = 298) for acute respiratory tract infections. According to current guidelines, 79% were determined to be unnecessary. A major finding revealed that patients pressured providers for antibiotic prescriptions during the clinic visit. The main reasons for prescribing antibiotics in this study included a direct request from the patient, a diagnosis suggested by the patient, a set of symptoms specifically indexing a particular diagnosis, portraying severity of illness, appealing to life-world circumstances, and previous use of antibiotics by the patient for similar symptoms. Providers rationalized their antibiotic prescriptions by reporting medically acceptable reasons such as the presence of yellow mucus in patients.12

Ladd completed a cross-sectional retrospective review of data from the National Hospital Ambulatory Medical Care Survey and the National Ambulatory Medical Care Survey from 1997 to 2001.13 Data were collected on a national probability sample of 506 NPs and 13,692 medical doctors (MDs). The visits were with patients with nonspecific upper respiratory tract infection, viral pharyngitis, and bronchitis.

Bivariate analysis found no significant differences in antibiotic prescribing for viral upper respiratory tract infections by NPs (50.4%) and MDs (53%). Broad-spectrum antibiotics accounted for 36.6% of the NP antibiotic prescriptions and for 33.2% of the MD antibiotic prescriptions. Multivariate analysis identified several clinical and nonclinical factors that are associated with NP antibiotic prescribing. The author concludes that the excessive use of antibiotics for upper respiratory infections of viral etiology by both NPs and MDs suggests the continuing need for the use of education tools to educate patients, as well as increasing involvement by both groups of providers in the dissemination of clinical guidelines and system-based quality assurance programs.

In summary, despite the evidence that providers are aware of guidelines for ABRS and want to treat patients that present with symptoms of ABRS so they will improve and not prescribe unnecessary antibiotics, providers may overestimate patient expectations for antibiotic prescriptions. Asking a single question, “What kind of treatment are you wanting today?” could increase provider and patient understanding, and give providers options other than antibiotics for ABRS symptoms.

Nancy Beckham, PhD, FNP-C, is an associate professor at Gonzaga University’s School of Nursing and Human Physiology and practices primary care medicine at the Mann-Grandstaff Veterans Affairs Medical Center, both in Spokane, Washington.