An 89-year-old woman presented with chief concern of nausea with episodic, progressive, crampy lower abdominal pain. She had no vomiting, fever, or cough. Her last bowel movement had been on the day prior to presentation. Her past medical history was significant for peripheral vascular disease and hypertension; she also had undergone hysterectomy, bilateral oophorectomy, and partial gastrectomy, during which she had received subcutaneous unfractionated heparin for deep-vein thrombosis (DVT) prophylaxis. Her current medication list included ranitidine; butalbital, acetaminophen, and caffeine (Fioricet); vitamin B12; and metoprolol.

After further clinical examination, in conjunction with abdominal computed tomography (CT), she received a diagnosis of proximal small bowel distention with incomplete obstruction. Her case was managed conservatively, and her symptoms improved significantly enough to warrant hospital discharge.

On the day of discharge, however, she developed severe, diffuse, infraumbilical pain with distension, oliguria, and a significant drop in systolic blood pressure to the 60 mm Hg range.

Diagnostic tests. Stat laboratory tests demonstrated a steep drop in hemoglobin from 11.4 to 7.6 g/dL. Results of a CT scan (Figures 1 and 2) were suggestive of large, bilateral rectus sheath hematomas (RSH) extending into the pelvis, with mass effect on the bladder, and with hemorrhage extending retroperitoneally. Although no hydronephrosis was seen initially, her kidney function worsened; creatinine increased from a baseline of 0.98 mg/dL to 2.16 mg/dL, and urine microscopy confirmed the presence of granular casts, suggestive of acute tubular necrosis (ATN). 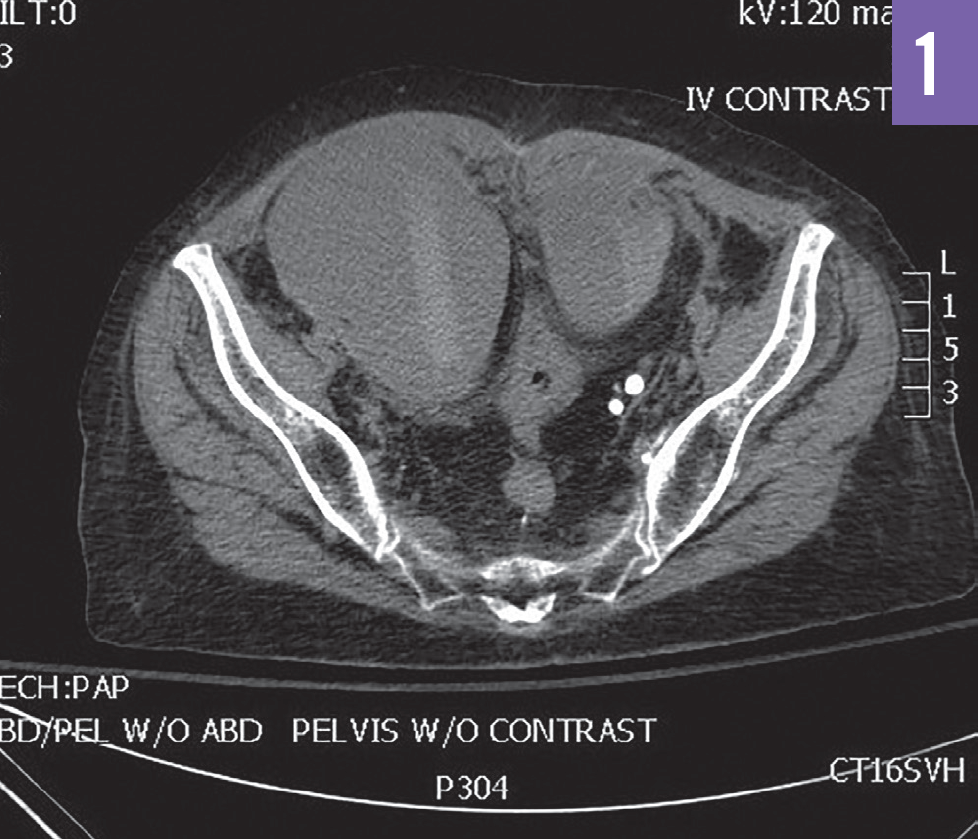 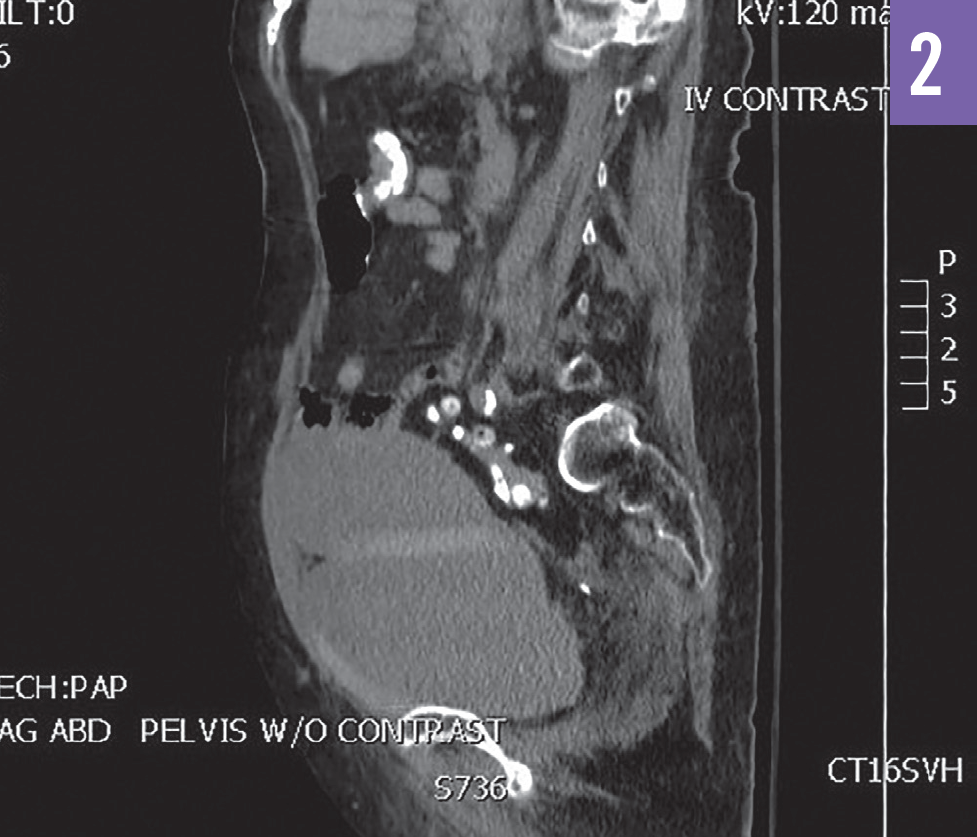 Treatment. The patient was aggressively resuscitated with intravenous fluids and a blood transfusion. She was further managed with pain medications and the application of hot compresses. Subsequent renal ultrasonography showed new, mild, left hydronephrosis secondary to the large RSH extending into the pelvis.

Outcome of the case. The woman’s clinical condition improved in few days, and she was discharged home after normalization of renal function and stabilization of hemoglobin levels.

Discussion. Although rare, RSH is a well-known cause of acute abdomen. It often is clinically misdiagnosed, because it mimics other serious intra-abdominal conditions.

RSH is caused by the accumulation of blood in the sheath of the rectus abdominis, related either to a rupture of one of the epigastric arteries or to a direct muscular tear. RSH is enclosed within the aponeuroses of the external oblique, internal oblique, and transversalis muscles, which remain intact, except for the posterior part below the arcuate line, which has only a weak transverse fascia.1 RSH above the arcuate line generally is caused by damage to the superior epigastric artery and usually is a self-limited, unilateral, small, spindle-shaped mass. Bleeds from the inferior epigastric arteries below the arcuate line, however, often are severe. They are more likely to cross the midline and expand inferiorly, resulting in peritoneal irritation, abdominal rigidity, and gastrointestinal tract symptoms, and they may occupy the retropubic space, causing bladder irritation and genitourinary tract complications.2,3

RSH occurs more frequently on the right side (60%), presumably because right-handed persons tend to put more stress on the right rectus muscle, and it occurs more frequently in the lower quadrants (80%). Its location and relatively rare occurrence explain why it is frequently mistaken for other, more common intra-abdominal pathologies such as strangulated hernia, twisted ovarian cyst, intestinal obstruction, neoplasm, perforated colon, pancreatitis, and acute appendicitis.4

RSH has been classified into 4 groups based on etiology2: traumatic, pregnancy-related, systemic disease-related, and idiopathic. RSH can occur spontaneously, but it also may be a complication of abdominal wall muscle strain, abdominal trauma, surgery, intra-abdominal injections, pregnancy, hypertension, atherosclerosis, or anticoagulation therapy.1-3,5

RSH occurs 3 times more frequently in women, with a peak incidence in fifth decade of life.5-7 The overall mortality is reported to be 4% but dramatically increases to as much as 18% for those who require surgical intervention and to 25% for those receiving anticoagulation therapy.1 However, the increasing number of elderly patients and the increasing use of therapeutic anticoagulation are expected to increase the prevalence and severity of RSH.8

Common symptoms of RSH include acute abdominal pain, which usually is localized to the lesion site and may vary from mild, dull pain to severe, sharp pain; fever; nausea; and vomiting. The hematocrit may be normal or significantly reduced depending on the size of hematoma. A palpable, nonmovable mass with respiration, abdominal rigidity, thoracic-type breathing, and abdominal wall ecchymosis also are characteristic.2-4

Ultrasonography, although useful as an initial screening test, has a low sensitivity (71%), whereas CT is an excellent method for diagnosis, with nearly 100% sensitivity and specificity.9 Magnetic resonance imaging also is used to distinguish chronic RSH from other anterior abdominal wall masses.10

Our patient’s advanced age, peripheral vascular disease, hypertension, and abdominal scar tissue from previous surgical procedures may have facilitated injury or degenerative changes of muscle and blood vessels, resulting in rupture even with minor stress or tension. Moreover, the anticoagulation therapy administered for DVT prophylaxis may have potentiated hematoma formation.2,11

In our patient’s rare case, RSH was complicated with ATN and mild hydronephrosis. CT demonstrated a large hemorrhage extending retroperitoneally, associated with a significant drop in systolic blood pressure and a steep drop in hemoglobin level. Renal hypoperfusion caused ischemic ATN, which was confirmed by the presence of granular casts in the urine during microscopy, as well as by the increased creatinine level. Mild left hydronephrosis was a later complication in our patient due to obstructive uropathy secondary to a large RSH that extended into the pelvis.

Using the radiographic criteria set forth by Berná and colleagues12 to distinguish the levels of severity and the correlated management strategies (Table), our patient’s case was classified and managed as type III RSH. Patients with type III RSH often require blood transfusion and several days of inpatient bed rest, with serial physical examinations, hematocrit measurements, and additional imaging. Rarely, they develop hemodynamic instability that is unresponsive to conservative therapy with fresh frozen plasma and fluid resuscitation.12 Active bleeding accompanied by hemodynamic compromise can be managed either by ligating the vessels or with arterial embolization.13

Although our patient had an unusually large hematoma causing hypovolemic complications, she was successfully managed with prompt and aggressive conservative treatment, including intravenous fluids and packed red blood cell transfusions, without surgical intervention.