Recognition for Dr Kamat and Celebration for India

Deepak M. Kamat, MD, PhD, professor of pediatrics and longtime Consultant For Pediatricians Editorial Board member, was recognized by Wayne State University with the 2012 President’s Award for Excellence in Teaching. The faculty members who receive this award have made outstanding contributions in their field of education and demonstrate exceptional knowledge, unwavering enthusiasm, and an uncanny ability to motivate students.

Dr Kamat was 1 of 10 instructors at Wayne State to win this year’s award. We congratulate him for this fine achievement.

Dr Kamat’s enthusiasm for teaching and practicing medicine has earned him several “Teacher of the Year” awards. He is the author of many research and review articles, book chapters, and case reports. He also assists the American Academy of Pediatrics (AAP) with numerous educational publications. He is currently editor of the AAP Textbook of Global Child Health. In addition to his clinical and educational activities, Dr Kamat is busy with research and is the principal investigator of a research project funded by the NIH.

Dr Kamat has been writing for Consultant For Pediatricians since its inception in 2002. He remains a frequent contributor, reviewer, and advisor. His most prominent role is Series Editor of Photoclinic. He also often serves as Guest Editor of our Focus on Vaccines Special Issue.

A Historic Milestone for India

Dr Kamat has a keen interest in global immunization efforts to eradicate vaccine-preventable diseases. In a recent article in AAP News, he revealed how India was able to go 12 months without a single case of polio.1 He attributes the success to the effectiveness of the Pulse Polio Immunisation Programme and to commitment by India and its state governments. The program focused on vaccinating children in polio-endemic areas in India. 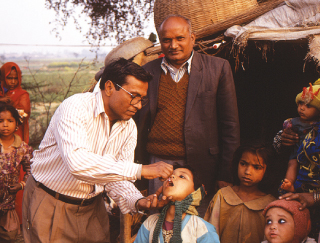 During 2010 to 2011, the program held 2 national and multiple subnational immunization days that led to millions of children up to age 5 years being vaccinated each day. In 2011 alone, 900 million doses of the bivalent oral polio vaccine were administered. These efforts were followed by large-scale multi-district “mop-up”
immunizations.

Dr Kamat stressed that global efforts to eradicate polio are continuing and are supported by multiple organizations, including the WHO, CDC, UNICEF, and the
Bill and Melinda Gates Foundation. The support of these organizations will help with polio eradication and other vaccine-preventable disease priorities among pediatricians in the United States and abroad, he concluded.