Recognition and Management of Autonomic Dysfunction in Patients With a Lewy Body Disorder: Part I

Lewy bodies—named for Friedrich Lewy, the German neuropathologist who discovered them circa 1912—are neuronal inclusions primarily containing alpha-synuclein proteins that develop in the brainstem, cerebral, and autonomic nervous system.1 The formation of Lewy bodies is characteristic of certain dementias, including Parkinson’s disease (PD) with dementia (PDD) and dementia with Lewy bodies (DLB). PDD and DLB demonstrate clinical and neuropathological similarities, especially in later clinical stages,2 and some researchers have proposed that Lewy body disorders (LBDs) represent a spectrum of neurodegenerative disease.2-4 For diagnostic purposes, however, the DLB Consortium states that “DLB should be diagnosed when dementia occurs before or concurrently with parkinsonism and PDD should be used to describe dementia that occurs in the context of well-established PD.”4 Although DLB and PDD are less prevalent than Alzheimer’s disease dementia and mixed/vascular dementia, they account for 10% to 20% of dementia diagnoses.2

The anatomic distribution of Lewy bodies appears to dictate the clinical manifestations of PD and DLB and determines whether patients will experience dysfunction of the autonomic nervous system (ANS).4,11 The ANS is a branch of the peripheral nervous system that facilitates neuronal impulses between the central nervous system and the body’s organs, helping to regulate involuntary (unconscious) functions such as contraction of smooth muscles and the cardiac muscle.7

Neurocardiovascular instability, a term that encompasses several manifestations of cardiovascular dysautonomia, including OH, vasovagal syndrome, and carotid sinus hypersensitivity, is prevalent in all common dementias.5 In patients with PDD and DLB, the evolving picture suggests that cardiovascular-related autonomic dysfunction occurs when Lewy bodies and alpha-synuclein proteins aggregate within the neurons found within the central nervous system and the peripheral nervous system. How this alpha-synuclein aggregation disrupts the individual neuron is debated. A picture is evolving, however, that suggests the autonomic manifestations of disease result from a combination of central and peripheral nervous system injuries. This includes damage to various regulating nuclei in the brain and the loss of peripheral nerves.12,13 Imaging studies, immunohistochemical staining, and functional medication studies all support the idea that cardiovascular dysautonomia in LBDs is caused, at least in part, by the loss of sympathetic and parasympathetic nerves.14-20 Researchers continue to debate whether the cumulative burden of Lewy bodies within the neural tissue of the cardiovascular system or the extent of denervation—believed to be caused by an excessive number of Lewy bodies within neural tissue—correlates with a patient’s risk of cardiovascular autonomic failure and its severity.11,17,19-23

Orthostatic hypotension is defined as a drop in systolic blood pressure (BP) of >20 mm Hg and/or a drop in diastolic BP of >10 mm Hg within 3 minutes of tilting maneuvers (passive) or maneuvering from a reclining position to a seated position to a standing position (active).12,24 The rate of OH in the general population is estimated to range from 5% to 30%.25,26 OH risk increases with age and is relatively common among older adults, many of whom are asymptomatic.5,25

Untreated OH is associated with stroke, ischemic cardiac disease, cognitive decline, and increased mortality.31-36 In a study of patients >65 years of age who presented to the emergency department after briefly losing consciousness, likely as a result of a syncopal condition, OH was established as the etiology for 12.4%.37 The authors found that patients with OH were more likely than those without OH to have an existing diagnosis of PD.

Matinolli and colleagues38 showed that patients with PD and OH had increased postural sway upon standing (vs while walking) as compared with PD patients without OH; postural sway is a known risk factor for falling. Although the study concluded that increased postural sway, and not OH, was the cause of the falls, the findings suggest that patients with OH remain at an increased risk of falls.38 Another study considered the presence of OH symptoms and the duration for which the BP level remains below baseline to be greater predictors of fall risk than the magnitude of the decline in BP level.39

Diagnosing Orthostatic Hypotension
Different methods are available to evaluate patients for OH (Table 1). Research protocols commonly use passive tilt table testing or head-up tilting at an angle between 60° and 70°, but this may not be practical in the clinical setting.40-43 Although there are no standards for in-clinic testing for OH, patients can be assessed with a standard sphygmomanometer while actively moving from a reclining position to standing. For patients with an LBD, some evidence supports monitoring BP levels continuously for up to 10 minutes after tilting/standing to watch for delayed OH.25,41 An ambulatory 24-hour BP and heart rate monitor may be a convenient way to evaluate patients for OH, supine hypertension, or postprandial hypotension.12,24,44

It is believed that OH occurs most often in the morning before breakfast and that this may be the time when the condition is most likely to be induced in the clinic.24 Variables discussed in various reports include testing for OH in the morning, after the patient has fasted through the night and prior to his or her taking any morning medications. Some studies recommend having the patient assume a variable supine position for 5 to 15 minutes, in a room with a steady temperature from 20°C to 22°C, prior to a position change.24,40-42,45

During an OH evaluation, a change in BP level combined with a corresponding increase in heart rate indicates hypovolemia or medication-induced OH. A change in BP level but no increase in heart rate favors a diagnosis of autonomic failure.12,24 One negative test result, however, is not sufficient to rule out OH, and practitioners should repeatedly assess patients with PD, PDD, or DLB for OH.

Managing Orthostatic Hypotension
The goal of managing OH should be to reduce the severity and frequency of symptoms, thus allowing the patient to ambulate more often. Although a reduction in OH symptoms may decrease the risk of falls while walking, note that an increase in time spent ambulatory may convey a greater risk of falls due to other causes. Controlled studies to guide the clinical management of OH in patients with PD, PDD, or DLB are lacking. Expert clinical opinion and theory represent the bulk of available information, and the Figure offers a proposed algorithm for evaluating and managing OH. 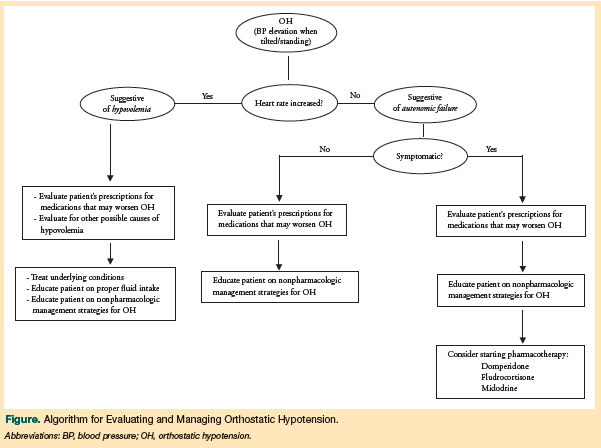 The first step in managing OH in patients with LBDs should be to review prescription drug use in these patients for any OH-inducing and OH-exacerbating agents. Recommended changes include decreasing dosages, eliminating medications where possible, or changing medication classes.12,24,44,49 To cause the least amount of motor change, it has been suggested that selegiline be the first of the most commonly prescribed antiparkinsonian medications to be decreased or halted.50 Although levodopa has been found to affect BP levels, this occurs primarily when patients are first starting the drug or when the dose is increased.12,51 Therefore, a diagnosis of OH in a levodopa-naïve patient with PD52,53 does not contraindicate the initiation of levodopa therapy, if the physician feels that it is clinically indicated.54 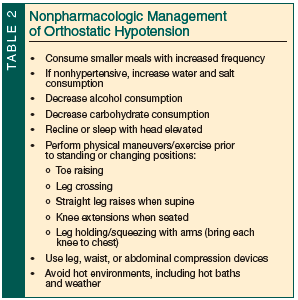 Approaches for treating OH consist of nonpharmacologic (Table 2) and pharmacologic treatment options.12 One of the most commonly discussed nonpharmacologic therapies for OH is compression stockings. They have been shown to be effective in managing OH, but patients demonstrate a very low compliance rate, particularly those living in warmer climates.12,24,44,45 Elevating the head of the bed is an effective way to reduce nocturia (waking at night to urinate). Physical maneuvers such as crossing, elevating, or flexing one’s legs or exercise help decrease vascular pooling and increase venous return; avoiding elevated temperatures can reduce vascular capacitance.12,24,46 A small study of nonpharmacologic therapies for reducing OH in patients with PD found that the degree of improvement was subjective.45

Numerous medications have been proposed for the treatment of OH,12 with midodrine, fludrocortisone, and domperidone being the drugs most commonly discussed. However, concerns regarding polypharmacy and drug-drug interactions have led to recommendations that pharmacotherapy be reserved for patients with symptomatic OH.

Midodrine is the only medication that has evidence to support its use as a treatment for OH.55 Midodrine has a short half-life and is the preferred agent for patients with OH and supine hypertension; use of fludrocortisone, which has a long half-life, is discouraged in these patients. Because of its short half-life, midodrine can be taken in the morning, at lunch, or within 4 hours of bedtime—but no later than 5 pm—to decrease OH symptoms and will not counteract the effectiveness of antihypertensive medications taken at night.12,24,51,56 Midodrine is associated with drug-induced hypertension and/or bradycardia,12 however, and it should not be used to treat patients who are at risk for or have a history of cardiac disease.

One study found improvement in Composite Autonomic Symptom Scale and Clinical Global Impression of Change scores in patients with PD whose OH was treated with domperidone or fludrocortisone.45 In this small, randomized controlled study, patients demonstrated better tolerance of domperidone. A review of treatment options for nonmotor symptoms of PD argued for using domperidone as a first-line agent in the treatment of OH because it was associated with additional beneficial effects, including a reduction in nausea, vomiting, and gastroparesis, all of which are autonomic symptoms that patients with an LBD may experience.57 In contrast, a small French study reported that although domperidone is widely used, evidence supporting its efficacy in ameliorating OH is lacking.58 Domperidone can cause QTc prolongation, which is known to occur with LBDs.57 At present, evidence supporting the use of fludrocortisone or domperidone to manage OH in patients with PD, PDD, or DLB is insufficient.54,58 Pyridostigmine is another drug that has been investigated in this patient population and recently was reported to reduce symptoms of OH without worsening supine hypertension.59,60

When evaluating the effectiveness of a treatment regimen, it is important to consider how the medications are being taken versus how they are prescribed. For example, if the clinician instructs the patient to take midodrine with breakfast, lunch, and dinner, the patient might awaken at 9 am, eat a small breakfast at 10 am, have lunch at 12:30 pm, eat dinner at 5 pm, and go to bed at 7 pm. This meal and medication use pattern would cause plasma trough levels of the medication to peak mid-day, with resultant supine hypertension, and would counteract any nighttime antihypertensive medications. To further understand the pharmacologic causes and the therapeutic options for OH in patients with an LBD, physicians should avail themselves of the many in-depth reviews that are available.12,24,44,46,47,56

Autonomic dysfunction is a frequent complication of the spectrum of LBDs. OH, an aspect of this associated dysautonomia, has a high prevalence among patients with an LBD. OH is often asymptomatic, and physicians who treat patients with an LBD should be vigilant about evaluating their patients for OH. Some studies have found that OH can have a profound effect on patients, affecting long-term physical health and quality of life.

Diagnosing OH in patients with LBDs may require more than monitoring/testing BP levels in the clinic; long-term monitoring and listening to the patient’s subjective symptom complaints may also be necessary. Adequate treatment of OH in patients with PD, PDD, or DLB is often elusive,12 and may require multiple agents. Polypharmacy has its own pitfalls, however, with one study of Veterans Affairs patients demonstrating a positive correlation between the number of medications used and the risk of OH47; several in-depth reviews regarding pharmacologic causes of and therapies for OH exist.12,24,44,46,47,56

Disclaimer:
The views expressed in this article are those of the author(s) and do not necessarily reflect the official policy or position of the Department of the Navy, Department of Defense, or the United States Government.