Disclosure: The authors declare no conflicts of interest and received no financial support for the research and/or authorship of this article. 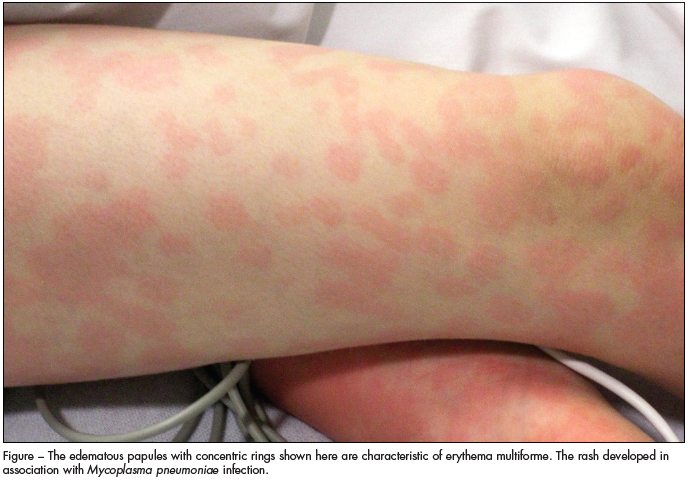 A 6-year-old boy was transferred to our hospital with a fever of 6 days’ duration, rash, and the presence of an S3 gallop. He and multiple family members had had cough and rhinorrhea during the preceding month.

He had been admitted to a local hospital on the third day of fever when a macular rash appeared on his palms and soles. A chest radiograph revealed diffuse infiltrates suggestive of pneumonia, and treatment with intravenous azithromycin and ceftriaxone was initiated. Within 24 hours, the rash had spread to the entire skin surface. The fever persisted at 40.8ºC (105.4ºF). Periorbital edema, painful edema of the hands and feet, and an S3 gallop also developed. A second chest radiograph showed cardiomegaly, which prompted the transfer.

Additional laboratory evaluations included a blood culture; urine histoplasma antigen; qualitative polymerase chain reaction (PCR) assay of whole blood for adenovirus, cytomegalovirus, Epstein-Barr virus (EBV), enterovirus, human parvovirus B19, and hepatitis C virus; and PCR of a nasal swab for human metapneumovirus, influenza A and B viruses, parainfluenza (1, 2, and 3) viruses, and respiratory syncytial virus. The EBV load in whole blood was less than 200 copies/µg of DNA, all other results were negative.

Serology results were negative for EBV IgM and positive for EBV viral capsid antigen antibody IgG and EBV nuclear antigen antibody IgG, suggestive of past infection with a low level of viral reactivation. Serologic studies for Mycoplasma pneumoniae ultimately showed an IgG of 1.27 unit/L (positive, greater than 0.33 unit/L)
and IgM of 4.09 unit/L (positive, greater than 0.96 unit/L), suggestive of recent infection.

Treatment with 1 dose of intravenous immunoglobulin and high-dose aspirin every 6 hours for suspected incomplete Kawasaki disease was initiated. Oral azithromycin therapy was continued for 5 days. The boy remained intermittently febrile, and his left ventricular function continued to decline with an EF as low as 41%. His symptoms of congestive heart failure were controlled with aggressive diuresis, and enalapril was added for myocardial remodeling.

M pneumoniae is most often associated with atypical pneumonia, with an incidence of 1 to 2 per 1000 children younger than 5 years and
3 to 4 per 1000 children aged 5 to 15 years.1 The boy in this case had myocarditis and erythema multiforme in addition to atypical pneumonia. These 2 less common extrapulmonary manifestations of M pneumoniae infection typically occur after resolution of pneumonia. This clinical syndrome can mimic Kawasaki disease.

Myocarditis associated with M pneumoniae infection was described as early as the 1970s.2,3 More than 20 case reports of Mycoplasma-associated myocarditis have been published since 1979.4 Although the association between M pneumoniae infection and erythema multiforme has been well described, the pathophysiology of the 2 conditions is not well known.5,6 Proposed causes include immune-complex mediated vascular injury, cell-mediated cytotoxic injury, and autoimmune mechanisms (such as molecular mimicry).6 M pneumoniae infection as a complication of Kawasaki disease has also been reported.7,8

In a patient with either erythema multiforme or myocarditis associated with respiratory illness, M pneumoniae infection should be considered in the differential.

Mycoplasma pneumonia is most commonly treated with azithromycin, although M pneumoniae is also inhibited in vitro by tetracyclines, ketolides, fluoroquinolones, and other macrolides. No controlled studies of medications for the treatment of extrapulmonary manifestations have been performed.1

The child completed a course of azithromycin therapy and was discharged home with instructions to continue taking enalapril and low-dose aspirin and to follow-up with a cardiology specialist. At 1-month follow-up, he was feeling well, his rash had resolved, his ESR had decreased to 18 mm/h, and results of an ECG and echocardiogram were normal. The enalapril and low-dose aspirin were discontinued at his 4-month follow-up. He continued to be well through 8 months of follow-up. He will be evaluated yearly by his cardiologist who will monitor for the remote possibility of future cardiomyopathy.