A Rash and “Brown Spots” in Vision: A Child With Cat-Scratch Disease

An 8-year-old girl presented to a hospital pediatrics department with a 3-month history of recurrent fever; a self-resolving, truncal, evanescent, macular rash; bilateral leg pain; and 1-day history of what she called “brown spots” in her vision in her left eye. She was noted to have left inferior optic disk papilledema and was admitted.

The girl was treated with corticosteroids and received a probable diagnosis of viral optic neuritis. She was discharged home after an inconclusive workup, including Bartonella henselae titers. After discharge, she did well for a week but then developed worsening brown spots in her left eye, along with headache, fever, and a self-resolving rash.

Review of symptoms this time was positive for blurry vision and intermittent leg pain not involving the joints but negative for mental status changes, behavioral changes, weakness, seizures, oral ulcers, muscle or joint stiffness, weight loss, or night sweats. The family had 2 kittens in the house. Social, family, and past medical histories were otherwise noncontributory.

Physical examination revealed a well-appearing, interactive girl in no acute distress. Her vital signs were normal except for a temperature of 38.2°C. Examination findings were significant for decreased visual acuity in the left eye and shotty cervical lymph nodes. The liver was approximately 4 cm down the costal margin.

Ophthalmologic evaluation showed progression of left optic neuritis; her right eye also was involved, with visual acuity of 20/400 in both eyes. She only was able to count fingers. Fundoscopic examination revealed florid optic nerve swelling of the left eye and chorioretinal lesions of the right eye (Figures 1 and 2). 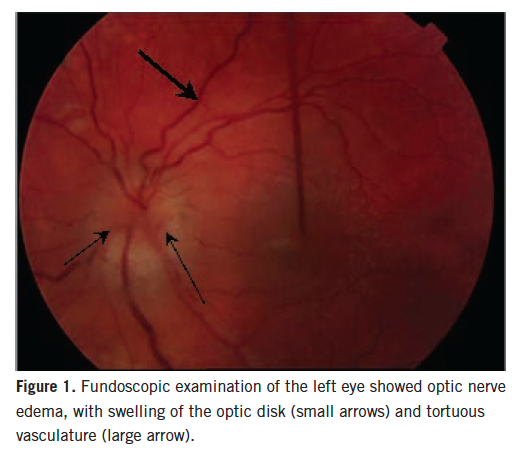 Laboratory test results showed an increased erythrocyte sedimentation rate (ESR) of 45 mm/h and an elevated C-reactive protein level of 59.7 mg/L. She had mildly elevated liver enzyme levels, with an aspartate aminotransferase level of 49 U/L and an alanine aminotransferase level of 51 U/L. Results of liver ultrasonography were normal. Prothrombin time was increased at 15.7 s, with normal international normalized ratio and activated partial thromboplastin time values. Results of renal function tests and a complete blood count (CBC) with differential count were normal.

The workup of this patient was negative for streptococcal infection, rheumatic fever, rheumatoid arthritis, autoimmune disorders, Lyme disease, toxoplasmosis, leptospirosis, brucellosis, syphilis, tuberculosis, hepatitis A, hepatitis B core, and hepatitis C antibodies. Results of a magnetic resonance angiography of the brain with multiple sclerosis protocol were normal. Results of echocardiography, performed to rule out endocarditis, were normal.

A lumbar puncture was done to rule out infectious or neoplastic processes that might cause optic nerve swelling; findings showed normal opening pressure, 2 red blood cells, and 70 white blood cells in cerebrospinal fluid (CSF), with 1% polymorphs, 84% lymphocytes, and 25% monocytes. The CSF protein level was 27 mg/dL, the glucose level was 48 mg/dL, and Bartonella IgM and IgG were not detected. The myelin basic protein level in CSF was less than 2 ng/mL, with a clear appearance and no growth on culture. Blood and urine culture testing results were negative. 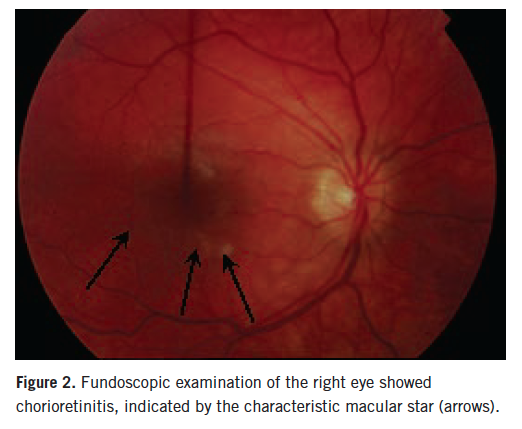 The patient’s neuroretinitis initially was treated with pulse corticosteroids and broad-spectrum antibiotics. After confirmation of CSD, she was discharged on a 4-week regimen of ciprofloxacin and a tapering dose of prednisone.

At 3 months’ follow-up, the girl’s ESR, CRP, and liver enzyme test results were normal. The B henselae IgG serum titer still was 1:1,024, but IgM now was negative. Her vision in both eyes had returned to 20/20, with decreased optic nerve edema of the left eye.

Cat-scratch disease is one of the major causes of chronic regional lymphadenitis in children, particularly those with a history of exposure to kittens. The first reported cases of CSD were published by Robert Debré in 1950, although illnesses with similar oculoglandular symptoms had been described as early as 1889.1 The causative species of bacteria was not definitively identified as B henselae until the 1990s.1 Studies have reported that between 54% and 87% of CSD cases occur in children younger than 18 years.1

In the United States, approximately 22,000 CSD cases are diagnosed annually, accounting for an estimated 2,000 hospitalizations.2 Most cases occur between July and January; the seasonal variations have been attributed to temporal breeding patterns of domestic cats, the time of acquisition of kittens as family pets, and the peak temporal presence of the cat flea (the major mode of Bartonella transmission among cats). B henselae antibody seroprevalence and bacteremia in humans have been found to be highest in regions with a warm, humid climate. Kittens, outdoor cats, and cats that are infested with fleas are more likely to be seropositive to B henselae.1

Six of the 19 identified Bartonella species cause human diseases. These bacteria are small, fastidious, aerobic and oxidase-negative, intracellular Gram-negative bacilli.1 More than 90% of infected patients have a history of contact with cats, and 57% to 83% have history of a scratch from a cat.2

CSD begins with an erythematous papule at the inoculation site approximately 3 to 10 days after inoculation. The papule progresses through erythematous, vesicular, papular, and crusted stages.1 This lesion persists for 1 to 3 weeks. CSD also presents with fever and lymphadenopathy in 86% of patients; 85% of patients have only a single node involved. Axillary and epitrochlear (46%), head and neck (26%), and groin (17.5%) lymph nodes most frequently are involved. Regional lymphadenopathy occurs 1 to 3 weeks after inoculation and persists for weeks to months. Approximately 10% of nodes will suppurate, requiring surgical drainage.

Systemic infection presents with fever, generalized aches, malaise, anorexia, and nausea. Less than 10% of patients have fever higher than 39°C, and one-third have no fever.1 Approximately 25% of patients with CSD present with atypical manifestations such as Parinaud oculoglandular syndrome, encephalitis, neuroretinitis, hepatosplenomegaly, thrombocytopenic purpura, osteomyelitis, endocarditis, or primary atypical pneumonia.3

Diagnosis of CSD must be made by epidemiologic history (requiring a high degree of clinical suspicion in geographic areas with increased incidence and prevalence of B henselae infection), clinical history (contact with cats), and clinical examination (eg, scratches, bites, inoculation papules with associated fever, malaise).

The histopathology of the affected lymph node that takes Warthin-Starry silver stain shows granuloma formation, with microabscesses and follicular hyperplasia.

Electron microscopy of affected lymph node tissues shows clumps of bacilli intracellularly and in vessel walls but no necrotic debris. Primary isolation of Bartonella species is difficult, since it requires a 2- to 6-week incubation period and the absence of systemic disease in most patients. Nodal culture testing offers a poor yield, since lymph nodes are not invaded directly.1

Typically, CSD is a self-limiting illness that resolves within 2 to 6 months, and it usually does not require antibiotic therapy. Management of mild to moderate infection in immunocompetent persons consists of reassurance, analgesics for pain, and follow-up. Most studies have shown no benefit of antibiotic therapy in CSD, but one study did reveal some in vivo effect. A retrospective study of 268 patients with CSD6 found that the mean duration of illness was 14.5 weeks with no treatment or ineffective treatment, while the mean duration of illness was 2.8 weeks with effective antibiotics. The ideal antibiotic would be a bactericidal drug with Gram-negative coverage. This study found rifampin, ciprofloxacin, gentamicin, and trimethoprim-sulfamethoxazole to be active against Bartonella, in order of increasing effectiveness.6

Treatment of neuroretinitis is either oral doxycycline (for patients older than 8 years) or oral erythromycin (for younger patients) with rifampin for 4 to 6 weeks. Rifampin promotes resolution of CSD neuroretinitis and truncates the systemic infection, resulting in regression of posterior pole findings. Visual acuity returns to 20/20 after 1 to 4 weeks of therapy. Recurrences in patients who are HIV-positive or otherwise immunocompromised can be prevented with the long-term use of doxycycline or a macrolide antibiotic.5,7 Duration of treatment is approximately 2 to 4 weeks in immunocompetent persons and 4 months in immunocompromised persons.

The use of corticosteroids has been reported anecdotally for use in Bartonella encephalitis, hepatosplenic disease, ocular disease, and systemic disease; however, some patients fail to respond. Further study is needed to determine whether corticosteroids can help decrease the severity of disease or improve disease outcomes.1

Cat-scratch disease is one of the most common causes of chronic lymphadenitis in children. But because CSD in a child may present with atypical manifestations such as neuroretinitis, encephalopathy, transverse myelitis, fever of unknown origin, and chronic osteomyelitis, the diagnosis can be missed. A careful clinical history that uncovers any contact with cats, a high index of suspicion, and the results of serology tests allow for early and accurate diagnosis and prevent the use of expensive and invasive diagnostic procedures.

Sharda Udassi, MD, is an assistant professor in Division of Pediatric Hospital Medicine at Shands Children’s Hospital at the University of Florida College of Medicine in Gainesville.

Jaclyn Otero, MD, is a pediatrician at UF Health Pediatrics–Magnolia Parke in Gainesville.

Sanjeev Y. Tuli, MD, is a professor of pediatrics, associate chair for Clinical Affairs and Community Relations, and Chief of the Division of General Academic Pediatrics at the University of Florida College of Medicine in Gainesville.

Jai P. Udassi, MD, is an assistant professor in the divisions of Pediatric Cardiology and Pediatric Critical Care Medicine at the University of Florida College of Medicine in Gainesville.

6. Margileth AM. Antibiotic therapy for cat-scratch disease: clinical study of therapeutic outcome in 268 patients and a review of the literature. Pediatr Infect Dis J. 1992;11(6):474-478.