A 43-year-old white male with a past medical history significant for metastatic pancreatic cancer presented to the emergency department with a 2-day history of fatigue, weakness, and dehydration. He was recently hospitalized after receiving sunitinib-based chemotherapy.

Upon admission, the patient was found to be in acute respiratory distress with altered mental status. Following stabilization in the ICU, the patient was noted to have rhonchi, diminished air entry bilaterally, and increased cough on physical exam.

The patient was admitted to the ICU and resuscitated with intravenous fluids, given calcitonin and bicarbonate, and placed on a 50% Venturi mask. Because of his recent hospitalization, the patient’s blood, sputum, and urine were cultured a few hours after admission. Treatment for hospital acquired pneumonia was initiated with renally-adjusted ciprofloxacin, vancomycin, and piperacillin-tazobactam.

The patient’s electrolyte derangements and renal function improved; however, his leukocytosis worsened the following day (white blood cell count of 15.2 k/uL with 94% neutrophils). His interval CXR showed worsening pneumonia and diffuse patchy infiltrates in the entire right lobe and left upper lobe (Figure 2). With broad-spectrum antibiotics, the patient’s pneumonia improved by day 4 of his hospitalization, but he required high flow oxygen to maintain adequate saturations.

The patient was transferred to the medical ward on day 5 and his sputum culture grew Staphylococcus aureus and Raoultella planticola. R planticola was identified using a Vitek 2 biochemical identification system (88.5% accurate in identifying gram-negative bacilli1) and antibody susceptibility testing cards. Susceptibility testing revealed the R planticola was sensitive to most antibiotics with the exception of ampicillin (Table). The patient’s antibiotics coverage was deescalated to pipercillin-tazobactam monotherapy and he was discharged on hospital day 6. An interval CXR (Figure 3), taken 3 days after discharge, revealed substantial improvement and near resolution of previous infiltrates findings.

R planticola is a gram-negative, aerobic pathogen belonging to the Enterobacteriaceae family that is closely related to Klebsiella species.2,3 The genus Raoultella was created in 2001 based on analysis of the 16S rRNA and rpoB gene sequence that differentiated it from Klebsiella species. Among the 19 previously reported human cases of R planticola, our patient represents the third reported case of pneumonia and the first coinfection producing pneumonia with methicillin sensitive S aureus and R planticola. Other clinical manifestations of this organism include septicemia, pancreatitis, prostatitis, soft tissue infections, cholangitis, cholecystitis, gastritis, cystitis, surgical site and catheter-associated infections.4-10

Given its similarity to Klebsiella, it is not surprising that many of the cases of Raoultella infection involve chronically ill or immunocompromised patients.9,11 In our case, for example, our patient had end-stage pancreatic cancer and was recently hospitalized. His sputum grew both S aureus and R planticola and was sensitive to most of the antibiotics we tested; however, there has been growing resistance to this organism. In January 2014, Tseng et al11 discussed the emergence of carbapenem-resistant blaIMP-8 strains of Raoultella in Taiwan, and prompted attention to this infectious species.

In immunocompetent patients, it has been reported that only a third of patients have resolution of CXR findings after bacterial pneumonia, but it generally takes 2 to 3 months for complete resolution.12 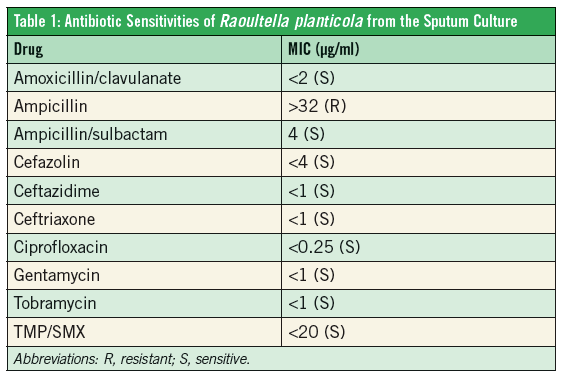 After being admitted to the ICU, he was stabilized and responded well to antibiotic therapy. He was discharged from the hospital on day 6. ■

Rezwan Ahmed, MD, is a resident physician in the department of internal medicine at Marshall University, Joan C. Edwards School of Medicine in Huntington, WV.

Larry Dial, MD, is an associate professor and chair of the department of internal medicine at Marshall University, Joan C. Edwards School of Medicine in Huntington, WV.

Darshana Shah, PhD is a professor of pathology and associate dean of the Office of Faculty Affairs & Professional Development at Marshall University, Joan C.Edwards School of Medicine in Huntington, WV.