A 31-year-old previously healthy woman was admitted to the hospital for a 5-day history of bloody diarrhea and associated epigastric abdominal pain. She reported having a fever, with a maximum temperature of 38.3°C. She had nausea but no vomiting. Her medical history was notable only for major depressive disorder and seasonal allergies. She had no recent history of travel and no known sick contacts. She worked as a school counselor. She did not use tobacco or recreational drugs. 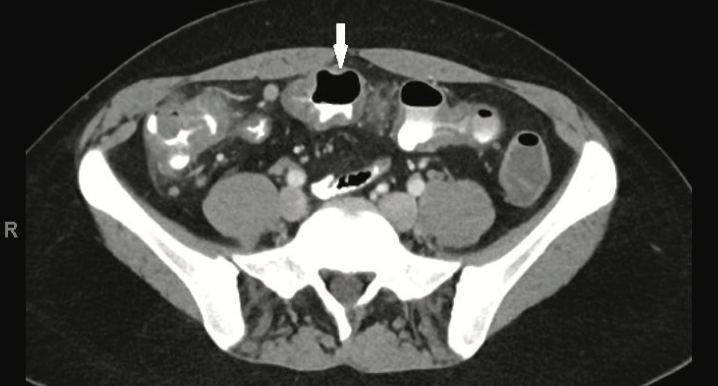 Because of the severity of her initial symptoms, she was started on intravenous (IV) ciprofloxacin to treat empirically for invasive bacterial sources of colitis, and IV metronidazole specifically to cover for Clostridium difficile. She had minimal improvement after 3 days of this treatment.

Results of fecal testing for C difficile, Giardia lamblia, and Cryptosporidium species were negative. A stool culture was positive for heavy growth of methicillin-resistant Staphylococcus aureus (MRSA) and was negative for Salmonella, Shigella, Campylobacter, and Escherichia coli. Her antibiotic regimen was changed to oral vancomycin, 500 mg every 6 hours.

The patient had no history of MRSA infection or any known exposure to MRSA. Two sets of blood cultures were negative after 5 days of incubation. Her diarrhea and abdominal pain had improved significantly after 3 days of oral vancomycin, but it was discovered just prior to hospital discharge that she was unable to afford a prescription for oral vancomycin to complete a 10-day course. Because the MRSA isolate in her stool culture tested as being sensitive to trimethoprim-sulfamethoxazole (TMP-SMX), she was instructed at discharge to complete a 7-day course of TMP-SMX (160 mg trimethoprim and 800 mg sulfamethoxazole; 1 tablet twice a day).

Her symptoms improved substantially with this treatment, but she continued to have occasional abdominal cramping and loose stools for months afterward. These symptoms were much less severe than her initial illness had been and gradually resolved without treatment. Results of repeated stool cultures and fecal testing for C difficile were negative. She underwent a colonoscopy, which demonstrated normal-appearing mucosa throughout the colon. Cold forceps biopsies from the ascending colon and transverse colon were normal histopathologically, notably without findings suggestive of inflammatory bowel disease (IBD). Her slow return to baseline stool function may have been related to alteration of the gut flora, although this cannot be confirmed.

A study examining data from the National Health and Nutrition Examination Survey from 2001 through 2004 found that despite an overall increase in MRSA nasal colonization in the United States, the percentage of isolates typically associated with community-acquired infection was low.5 This finding suggests that the strains associated with CA-MRSA may favor other sites of colonization such as the skin, pharynx, vagina, or gastrointestinal tract, although this has not been proven.5 In a 2007 study of 71 hospitalized patients, 67% of the 39 patients found to be colonized with S aureus were colonized in the GI tract, suggesting that it may be a more frequent site of colonization than had been previously known.6

Only a few cases of MRSA colitis have been reported in the literature. These cases have generally been associated with certain risk factors such as Crohn disease, recent antibiotic use, and recent intra-abdominal surgery.7-9 Another case was diagnosed in a pediatric unit nurse and thus was associated with a significant occupational exposure to MRSA.9 In all of these cases, the patients were treated with oral vancomycin, except for 1 patient who was treated with linezolid.7

Our patient had none of the traditional risk factors for MRSA colonization and infection. She also had no history of IBD, no recent antibiotic use, and no recent abdominal surgery; ultimately, it was concluded that her infection was community-acquired. S aureus infection of the gastrointestinal tract frequently has been associated with food poisoning, but such cases typically present with sudden-onset vomiting, and only a minority of patients will have diarrhea. In addition, symptoms of S aureus food poisoning typically resolve within 24 hours.

Our patient initially had been treated with oral vancomycin, but the antibiotic regimen was switched to TMP-SMX out of cost concerns. As far as we are aware, no other cases have been reported of successful treatment of MRSA colitis with TMP-SMX. This suggests that TMP-SMX may be an appropriate alternative to vancomycin in patients with MRSA colitis.