A 6-week-old, full-term, white girl presented with a rapidly enlarging right-sided neck/parotid gland mass. Her parents had noticed a small, nontender bump at 3 weeks of age that had remained the same size until 4 days before admission, at which time it began to rapidly enlarge. She continued to feed well and had no constitutional symptoms.

A soft, rubbery, nonfluctuant, mobile mass was palpated on the right inferior mandible and upper anterolateral neck. There was no overlying warmth or tenderness, and edema extended over the right neck and parotid gland. The external auditory canal wall had significant edema that obscured the view of the right tympanic membrane, and the right ear was protruding forward. There was a vascular lesion on the dorsum and tip of the tongue. No stridor or hepatosplenomegaly were noted. 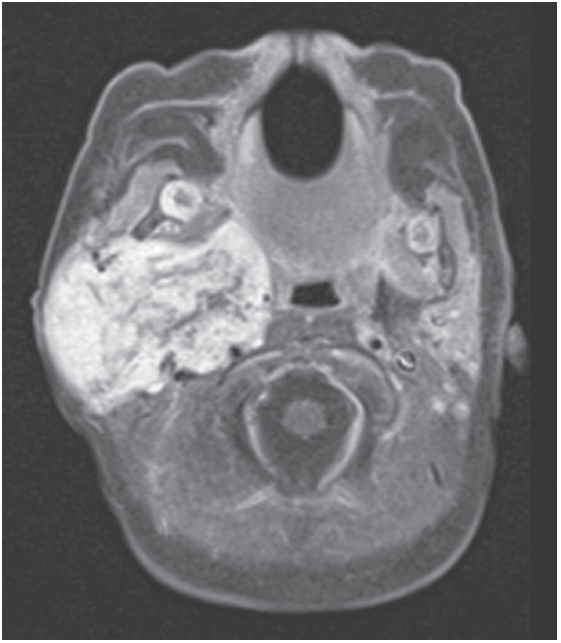 Figure 1 – Postcontrast T1 axial view of the head demonstrates a large, 4.7 3 3.0-cm lesion,with heterogeneous enhancement in the region of the parotid gland and masticator space withmass effect on adjacent structures; features not typical of a proliferative hemangioma.

Because imaging remained inconclusive for a definitive diagnosis, the patient underwent ultrasound-guided fine-needle aspiration, which confirmed infantile hemangioma. Given its recent increase in size and increased vascularity, the hemangioma likely was in the proliferative phase.

Hemangiomas are the most common benign tumors of infancy, occurring in up to 10% of term infants.1-5 They usually become apparent within the first 1 to 2 months of life and grow rapidly in the first year of life (proliferation phase). Typically, slowed growth is seen in the next 5 years, with spontaneous involution by around 10 years of age (involution phase).2-6

Many hemangiomas require no treatment unless they are life-threatening or threatening to vital organs, such as the airway or eyes.1,6 However, recent literature supports a growing awareness that scarring and disfigurement are morbidities that, although not life threatening, can be life altering, and if recognized before rapid proliferation, may be prevented with early intervention.2,3 Therapies can include pulsed-dye laser treatment, sclerotherapy, surgical excision, and therapy with intralesional or oral corticosteroids, interferon alfa, vincristine, and propranolol.3-5 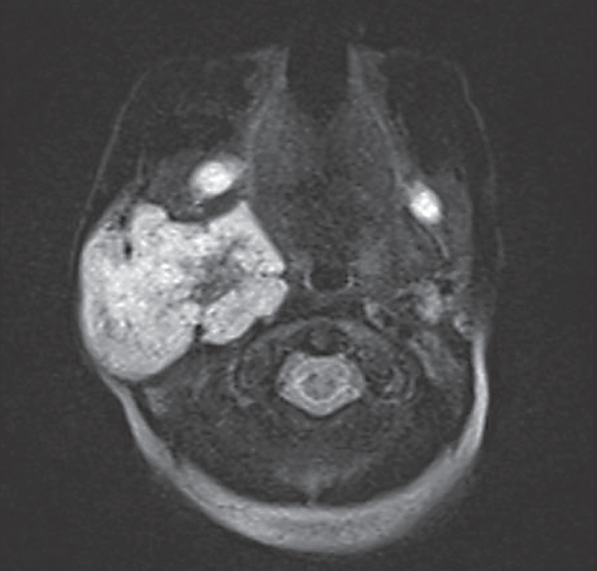 Use of the nonselective ß-blocker propranolol to treat infantile hemangiomas has shown great promise as a safe and effective systemic therapy.3,5 Its mechanism of action for use with hemangiomas is still unknown, but treatment causes rapid halt of proliferation and promotes dramatic regression of the lesion, even within a few days of initiating treatment.3-5 Unlike with corticosteroids, positive results have been seen with propranolol even after the growth phase has completed. Because propranolol’s adverse effects include hypotension, bradycardia, and hypoglycemia, monitoring is needed, especially with treatment initiation.3,5 Relapse may be avoided if treatment is continued through the entire proliferation phase (around 12 months).4 Further studies are needed to investigate the exact mechanism of action, optimal dose, and length of treatment of using propranolol for this purpose.4,5

Just 4 days after initiation of propranolol therapy, this patient had significant improvement in size and softening of her lesion. After 4 months, she has had almost complete resolution of her hemangioma and has tolerated the propranolol well, with no adverse effects. She continues to be followed by otorhinolaryngology and cardiology, and propranolol will be continued for a total of 12 months before considering tapering-off of the medication.