Rapid Diagnostic Testing for Influenza: When Does It Make Sense?

Influenza affects up to 40% of healthy children each year and carries with it risks of respiratory tract complications, hospitalization and, rarely, death.1 Infants and young children are at increased risk for complications and hospitalization, as are children of any age who have underlying medical problems, especially those with significant cardiopulmonary disease. Timely diagnosis of influenza permits early initiation of specific antiviral treatment as well as prophylaxis of unimmunized, high-risk contacts. Accurate diagnosis of influenza may also help both clinician and patient avoid unnecessary evaluation and treatment for other causes of illness.

However, because the signs and symptoms of influenza are not specific and often resemble those caused by other respiratory viruses, diagnosing it on the basis of clinical findings can be challenging. In one recent study, the clinical diagnosis of influenza in children was correct only about one third of the time. Diagnostic accuracy was especially low in children younger than 3 years; it was also particularly low early and late in the "flu season," when influenza was less common in the community.2 Because clinical diagnosis is often inaccurate (and because the timing of each year's epidemic varies, making determinations of "early in the season" difficult), clinicians sometimes order a laboratory test to confirm a clinical suspicion of influenza.

Studies that can confirm a diagnosis of influenza include rapid antigen testing, immunofluorescent antigen testing, enzyme immunoassay, reverse transcriptase polymerase chain reaction, viral culture, and serology.1 In the setting of a pediatric office or clinic, rapid antigen tests are most commonly used because they are quick (results in less than 30 minutes) and practical.

In this article, we examine how the accuracy of these rapid tests is affected by the prevalence of influenza in the community at the time of testing. We also present a practical approach to determining whether ordering a rapid antigen test is a reasonable option, based on both disease prevalence and clinical suspicion.

The predictive values of rapid influenza tests also depend on the prevalence of influenza in the population. To estimate the disease prevalence during the course of a typical influenza season, we reviewed national influenza activity data from the CDC for the past 6 winters.5 These data represent the proportion of surveillance specimens obtained each week from patients with respiratory symptoms from which influenza virus type A or B was isolated. Then, for each winter season, we defined the peak week as the week with the highest proportion of specimens from which influenza virus was isolated. For each season, we determined disease activity at 5 different times:

To determine national influenza rates at each of these times during a hypothetical "typical" influenza season, we averaged disease activity at that time over the 6 seasons. 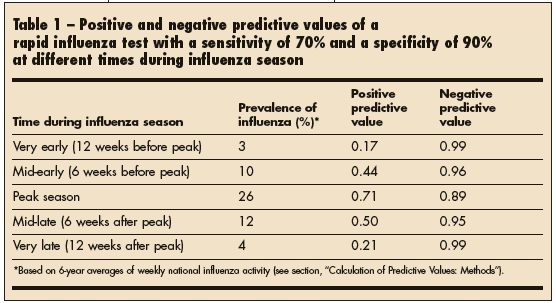 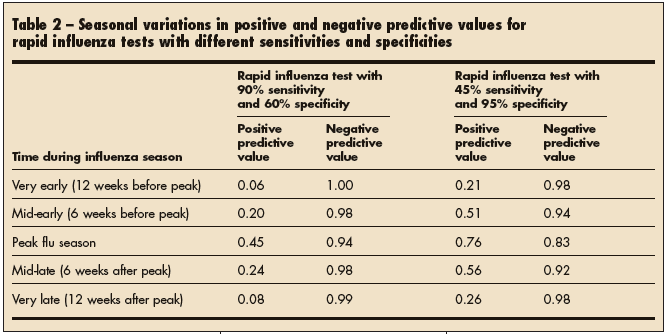 Taken together, Tables 1 and 2 show the positive and negative predictive values, over the course of the flu season, of rapid influenza diagnostic tests with sensitivities ranging from 45% to 90% and specificities ranging from 60% to 95%.

LIMITATIONS ON RELIABILITY FOR OFF-SEASON TEST RESULTS
Disease activity may change rapidly, especially with a disease like influenza that has marked seasonal variation. Our analysis demonstrates, in a concrete manner, how the predictive values of rapid influenza diagnostic tests can vary over the course of a typical influenza season in which disease activity starts at a low level, increases to a peak, and then declines to a low level again.

Some clinicians tend to trust their clinical judgment when diagnosing influenza at the peak of the flu season in their community but rely more heavily on rapid influenza testing early in the season.6 The Tables show, however, that the positive predictive value of a rapid influenza test can be quite low at off-peak times. False-positive results are very likely early in the season because the test is not perfectly specific and the disease frequency is relatively low.

Of interest, at times of very high disease prevalence, false negatives might become a problem. In one recent study, 50% of children tested for influenza in a pediatric office had a positive result on either viral culture or direct fluorescent antigen testing.7 We therefore repeated our calculations to assess the effect that a prevalence of this magnitude (50%) would have on the predictive values of rapid tests. The positive predictive value of a test with a sensitivity of 70% and a specificity of 90% would be 88% under these circumstances, but its negative predictive value would fall to 75%.

In addition to being affected by disease prevalence, the predictive values of rapid influenza tests are also affected by whether the particular test being used detects both influenza A and influenza B. Most rapid tests detect both types, but some tests detect only one. If a child has influenza B and the rapid test used detects only influenza A, a "negative" test result would technically be a true negative. However, from a clinical perspective, the result would act as a false negative--this child (and his or her close contacts) might lose out on the potential benefits of treatment (or prophylaxis) with a neuraminidase inhibitor. Thus, the functional negative predictive value of any rapid test that detects only one type of influenza is lower than even calculations that take disease prevalence into account would indicate.

Because of constant technological advances, it is to be expected that the sensitivity and specificity of tests such as the rapid antigen test will improve with time. However, while the predictive values at all disease frequencies may increase as test accuracy improves, the seasonal variation in predictive values will persist because of cyclic variations in influenza activity. A test with higher specificity will have the highest positive predictive value during peak disease activity but may still be relatively inaccurate during off-peak times.

The likelihood of any individual patient having influenza varies according to season and the frequency of influenza in the community but also according to the patient's clinical presentation. For example, a patient presenting with classic signs and symptoms of influenza early in the flu season may be just as likely to have influenza as a patient who presents at the peak of disease activity with less typical signs and symptoms. 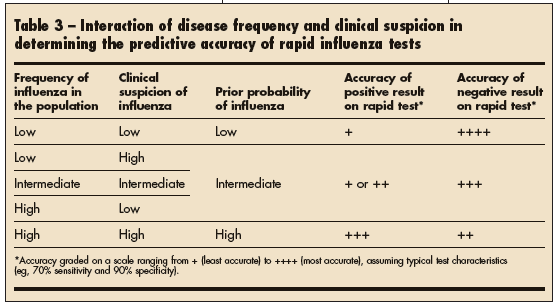 The prior probability of influenza in turn affects the predictive accuracy of positive and negative results on rapid antigen tests (Table 3). Thus, to best determine whether testing is likely to be helpful in a given patient, test sensitivity and specificity, disease frequency, and the level of clinical suspicion must all be taken into consideration.

WHAT IT MEANS FOR YOUR PRACTICE

Table 3 shows how disease frequency and clinical suspicion work together to affect the predictive accuracy of results of a rapid antigen test with typical sensitivity and specificity. This table can help you use rapid influenza testing more wisely in your practice.

For example, suppose you see a child during a period of low influenza frequency and he has some respiratory symptoms but an overall clinical picture that is not very suggestive of influenza. For this patient, the prior probability of influenza would be very low. A positive result on a rapid influenza test in this setting would very likely be a false positive and might be clinically misleading. A negative test result would very likely be accurate and could potentially help you rule out a diagnosis of influenza. However, the test would only serve to confirm what you already strongly suspect. Thus, in this setting, you might decide to rely solely on your clinical judgment to rule out influenza.

At the other extreme, suppose you see a child at the height of annual influenza activity and the clinical findings strongly suggest influenza. A negative result on a rapid influenza test might help you avoid unnecessary antiviral treatment; however, in this setting, a negative result could be a false negative and would be clinically misleading. A positive result would probably be accurate and would support the clinical diagnosis--but here, too, would only serve to confirm what you already strongly suspect. Thus, in this setting as well you might decide to rely on your clinical judgment to make the diagnosis of influenza.

The rapid test is more likely to be helpful in situations where the likelihood (prior probability) of influenza is intermediate. For example, if there is very strong clinical suspicion during the early phase of influenza season or moderate clinical suspicion during peak influenza season, a rapid diagnostic test may help to clarify the correct diagnosis and guide optimal management. Further clinical studies will hopefully clarify even further how in-office use of rapid influenza tests can best complement clinical judgment in the evaluation of children with flu-like illnesses.

Acknowledgment: Ronald B. Turner, MD, made many helpful suggestions.