A 14-year-old girl presented to a hospital with concern for progressively worsening diffuse abdominal pain. The consumption of food exacerbated the abdominal pain, and she had been experiencing 1 or 2 loose bowel movements a day over the past month.

She had been seen at an outside hospital for similar symptoms 2 days prior to this presentation. Abdominal CT done at that time had ruled out appendicitis.

The girl had a history of Helicobacter pylori infection, oppositional defiant disorder, and attention-deficit/hyperactivity disorder, and she was taking fluoxetine and risperidone. She had no vomiting, fever, or sick contacts. Her last menstrual period had been 11 days prior to admission. 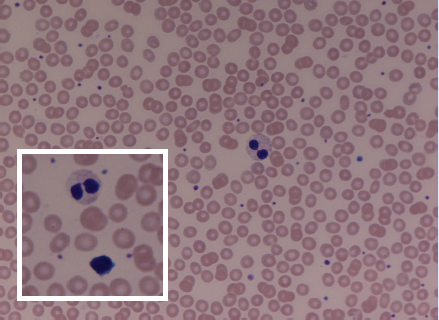 The patient underwent a complete diagnostic workup, including a physical examination, blood work, and stool studies. On physical examination, the girl’s vital signs were stable, and she was in no apparent distress. She had minimal generalized tenderness upon palpation of the abdomen, with no guarding or rebound, and no abdominal distention or masses were present.

Laboratory investigations were performed, including but not limited to amylase level, lipase level, H pylori antigen, a comprehensive celiac disease panel, vitamin D level, a thyroid panel, insulin level, a lipid panel, and a urine human chorionic gonadotropin test. While all results were negative or within normal limits, results of a complete blood count (CBC) with manual differential were of particular interest: It revealed a normal number of white blood cells, with a high ratio of bands to total neutrophils, reported as “segmented neutrophils that appear bi-lobed with coarse chromatin that resembles a Pelger-Huët anomaly,” 32% lymphocytes, 7% monocytes, 7% eosinophils, and 16% bands.

During her hospital admission, the patient received intravenous fluids and omeprazole and was monitored for adequate input and output. Two days later, her abdominal pain had improved, and she was discharged home with instructions to follow up on an outpatient basis with hematology and gastroenterology.

In 1928, Karl Pelger, a Dutch tuberculosis specialist, made this observation about the appearance of neutrophils in the peripheral smears of severely ill patients with disseminated tuberculosis and associated it with a poor prognosis: “These cells have a distinct, almost mosaic-like clumping of the chromatin that is especially fine. What is most striking is that the nuclei are so short and compact.”1 In 1932, Dutch pediatrician G.J. Huët discovered that Pelger’s observation in fact was a benign autosomal dominant inherited trait, rather than an acquired response to tuberculosis infection.1 The Pelger-Huët anomaly (PHA) now bears both physicians’ names.

PHA is a benign inherited condition characterized by hyposegmentation of neutrophils’ nucleus and excessive chromatin clumping. An acquired neutrophil dysplasia closely resembling hereditary PHA—called acquired or pseudo–Pelger-Huët anomaly (PPHA)—has been described in association with certain hematologic diseases and in certain clinical situations, especially in patients who are taking certain medications.

The distinction between PHA and PPHA is based on the absence of other abnormal leukocytes, the absence of cytoplasmic changes such as toxic granulation, and absence of clinical conditions known to give rise to Pelger-Huët–like changes.2 In cases of acquired PPHA, only a fraction of neutrophils will display the characteristic Pelger-Huët bi-lobed nuclear morphology, compared with congenital PHA, which is defined by the near absence of normal neutrophil segmentation.2

Pelger-Huët cells can be detected only on examination of a peripheral blood smear. If a clinical laboratory does not examine most of the stained slide, the morphologically distinct WBCs that are associated with PHA and PPHA may not be identified. Thus their incidence may be underestimated.3

PPHA can be seen in 2 primary categories of acquired granulocytic changes: First, it can occur in myeloid neoplasms and is considered a component of malignancy. Second, it can occur in association with various infections1 or can be induced by certain medications,4 such as mycophenolate,5 tacrolimus,5,6 ganciclovir,7 fluconazole,6 ibuprofen,8 sulfisoxazole,9 valproate,10 d-penicillamine,11 paclitaxel,12 docetaxel,12 granulocyte colony-stimulating factor,13 granulocyte-macrophage colony-stimulating factor,13 and colchicine.14

Risperidone, an antipsychotic mainly used to treat schizophrenia, schizoaffective disorder, bipolar disorder, and aggressive behavior, is a dopamine antagonist with antiserotonergic, antiadrenergic, and antihistaminergic properties. While the prescribing information for risperidone15 mentions PHA as a possible rare adverse effect, no case of risperidone-associated PHA or PPHA had been reported until the possible case described here.

Medication-associated PPHA is considered benign and reversible when the inciting agent is discontinued. However, because of our patient’s behavioral disorders, we were not able to discontinue risperidone and repeat a CBC to determine whether the PPHA had resolved. Even though a causal association between our patient’s antipsychotic medication use and PPHA cannot be established, this case should raise awareness that such an association is possible.

The authors thank the Department of Pathology at Flushing Hospital Medical Center for technical assistance with the images.