What Is This Pruritic Rash in a Man With HIV Infection?

Joy Ishii Zarandy, DO, and Joseph Halliday, DO

A 51-year-old African American man with HIV presented with a several month history of a severely pruritic rash involving a majority of his body. He had yet to enter care for his HIV infection and was antiretroviral naive.

The patient appeared cachectic. He was afebrile, with normal vital signs. Multiple firm, pruritic nodules of varying sizes covered the face, trunk, and extremities in a symmetric distribution (Figures 1 and 2). The nodules were excoriated, with central pink scaling and peripheral hyperpigmentation. The rash spared the palms, soles, flexural surfaces, and the mid-back region. 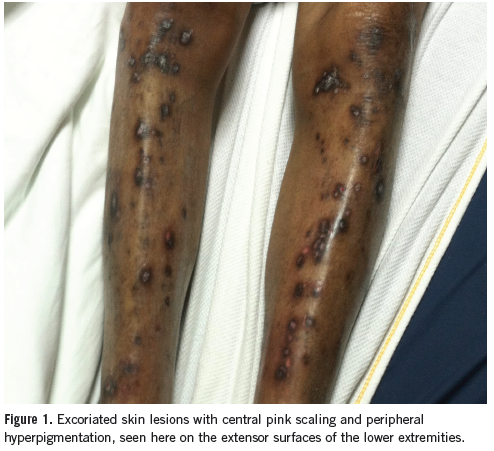 His CD4+ cell count was 4/mm3, with a viral load greater than 1 million copies/mL. The white blood cell count, platelet count, and electrolyte levels were within normal range. Results of a hepatitis panel were negative, and results of rapid plasma reagin test were negative for syphilis. Chest radiography results were normal.

Results of a biopsy of a nodule from his right shoulder revealed hyperkeratosis, nonspecific inflammatory changes, and pigmentary incontinence. Fungal stain test results were negative.

Infectious disease was consulted, and the diagnosis of prurigo nodularis (PN) was confirmed. 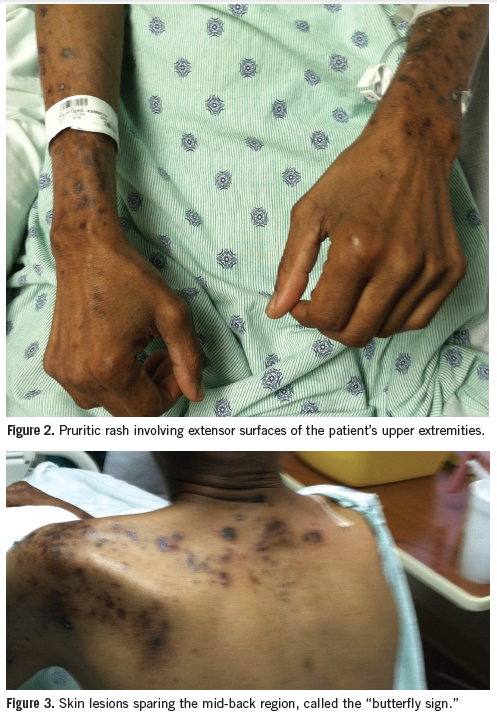 PN presents as chronic and severely pruritic nodules that commonly involve the extensor surfaces, extremities, and trunk. Body parts that are difficult for the patient to reach generally are spared, including the upper mid-back (the “butterfly sign,” Figure 3).1 PN usually is associated with a history of atopic dermatitis.2 The absence of a history of atopy should raise concern for systemic disease such as renal or liver failure, malignancy, thyroid disorder, parasitic infection, or HIV infection.3

Approximately 5% of patients with HIV have PN, particularly those with CD4+ cell counts below 200/mm3, and PN may be the presenting symptom of HIV.3,4 In addition to atopic dermatitis, predisposing conditions to PN in patients with HIV infection include eosinophilic dermatitis and xerosis.

Appropriate laboratory workup should be done to rule out systemic disease, and occasionally a skin biopsy is warranted if the diagnosis is uncertain. Histopathology results show orthohyperkeratosis, focal parakeratosis, irregular epidermal hyperplasia, and nonspecific dermal infiltrate such as macrophages, lymphocytes, neutrophils, or eosinophils.5

The pathogenesis is largely unknown, although some studies suggest a neurocutaneous component.6 Emotional stress, heat, sweat, mechanical irritation from clothes, or contact dermatitis can exacerbate symptoms of PN.7

The patient was started on a high-potency topical corticosteroid and oral antihistamines, as well as opportunistic infection prophylaxis. Outpatient follow-up was scheduled for the patient to begin antiretroviral therapy.

Joseph Halliday, DO, currently practices at AnMed Health in Anderson, SC, and specializes in infectious disease.