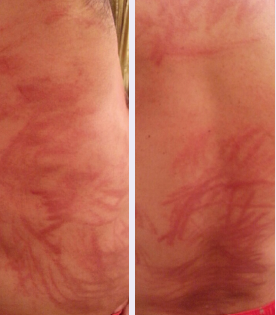 A 53-year-old Asian male presented with a 3 week history of a pruritic rash over his entire body. The rash began on his lower trunk, eventually spreading to involve his entire torso. He reported facial swelling, subjective fever at home, and scalp tenderness. A week prior to onset of the rash, he spent time trimming a lemon tree. He also reported ingestion of mushrooms 3 days prior to symptom onset. Ten years ago, he experienced facial edema due to simvastatin but was not currently taking this medication. Review of systems negative for swelling of tongue and throat, recent illness, myalgias, and arthralgias.

On physical examination, the patient is afebrile and has no lymphadenopathy. Flagellate, linear plaques with underlying areas of erythema are present on the chest, abdomen, flanks, and back. Slight facial fullness is present without swelling of tongue or neck. No dermatographism is elicited.

Diagnosis. Shiitake dermatitis is a reaction to ingestion of raw or undercooked mushrooms that occurs 1 to 3 days after ingestion.1 The rash has been described as “whip-like, linear, erythematous wheals,” and although extremely pruritic, it is not induced by scratching or contact with the mushroom. The condition is self-limiting, although symptomatic treatment of pruritus may be provided with topical corticosteroids.2 Patients experience resolution in days to weeks, with several case studies showing a proportional relationship between severity of disease and time to resolution.1

Lentinan, a polysaccharide found in the cell wall of shiitake mushrooms, has been implicated as the cause of shiitake dermatitis.1 Lentinan is broken down by heat, and therefore rash is only seen in patients who ingest raw/lightly cooked mushrooms.3 The mechanism thought to be due to interleukin-1 secretion, which causes vasodilation, hemorrhage, and eruption.2 It is important to note that this is not due to allergy; therefore there is no role for patch testing or prick testing.4 Lentinan is used as a supplement for various health benefits abroad, including blood pressure and cholesterol management, as well as treatment of gastric and colorectal tumors in Japan.2,3

Flagellate dermatitis is a well-described side effect of bleomycin toxicity. Hyperpigmentation will be present once the rash resolves if due to bleomycin, whereas it will be absent when caused by shiitake mushrooms. The rash with shiitake dermatitis is also erythematous and pruritic, in contrast to that of bleomycin.5

Dermatomyositis is a cause of proximal muscle weakness and rash and is associated with and increased risk of malignancy. The classic dermatologic manifestations include Gottron’s papules and a heliotrope rash. Flagellate dermatitis has been reported with dermatomyositis in rare cases, but the absence of other systemic or cutaneous findings makes the diagnosis unlikely.6

Citrus fruit is a well-known cause of phototoxic reactions and, less commonly, allergic contact dermatitis. While the patient reported gardening recently and contact with a lemon tree, we would expect his rash to be confined to his areas of exposure, rather than those covered by clothing. Phototoxic reactions to citrus tend to be linear and hyperpigmented, but not flagellate.7

Adult-onset Still’s disease (AOSD) is characterized by arthritis, daily fevers, and rash. The cutaneous involvement is usually evanescent with non-pruritic macules and papules on the trunk and extremities. Patients with AOSD typically complain of severe fever and systemic symptoms.8 ■