A 37-year-old man presented with a 10-day history of right flank pain, which he described as cramping and constant but with variable intensity. He had also had episodic nausea and vomiting and several episodes of blood-tinged urine. He was seen at an outside facility several days prior and underwent renal ultrasonography, noncontrast computed tomography (CT), and magnetic resonance imaging, the results of which were reportedly normal except for the presence of mild right hydronephrosis. He had a history of mild renal disease and HIV infection. His medications included ritonavir-boosted atazanavir, emtricitabine, and tenofovir.

At presentation, the patient’s temperature was 36.9°C, his pulse was 63 beats/min, and his blood pressure was 119/99 mm Hg. His abdomen was flat, soft, and nontender to palpation. He had mild right costovertebral angle tenderness. 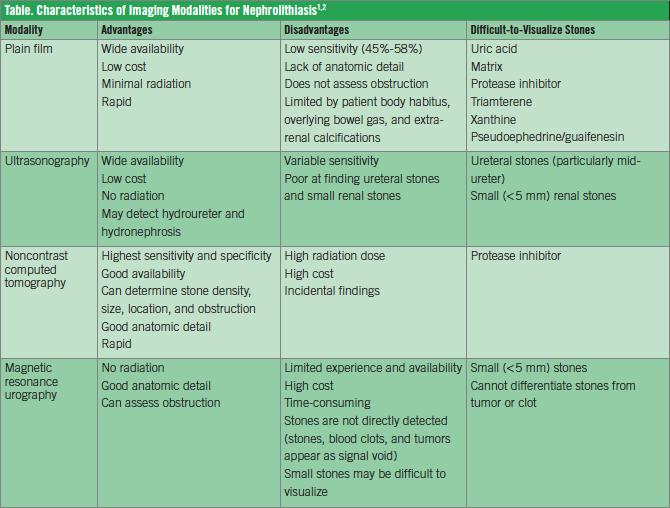 The patient was treated with intravenous fluid and morphine via patient-controlled analgesia. A consultant urologist performed cystoscopy with retrograde pyelography. The pyelogram showed right hydroureter without a definitive stone (Figure). Cystoscopy revealed brown debris in the right ureteral orifice. The debris was removed, and a ureteral stent was placed. The man’s symptoms rapidly improved, and he was discharged the next day.

Cystoureteroscopy and pyelogram were performed again several weeks later. The ureteral stent was removed, and the pyelogram showed a right mid-ureteral filling defect. Ureteroscopy revealed a 5- to 6-mm yellow stone, which was retrieved. Analysis of the stone showed it to be pure atazanavir.

Nephrolithiasis is a commonly encountered problem in primary care. Diagnosis generally involves radiologic imaging in the context of the patient’s history, examination finding, and laboratory study results. Several imaging modalities are available, each with different strengths and weaknesses (Table).1,2

Plain film is widely available, uses minimal radiation, and is inexpensive. However, plain film has low sensitivity due to challenges posed by body habitus and bowel gas. Additionally, a number of types of stones are radiolucent on plain film, including uric acid stones and medication-related stones such as those made of pseudoephedrine,3 guaifenesin,3 and protease inhibitors (PIs). Plain films also lack information on patient anatomy, including urinary tract obstruction.

Ultrasonography also is widely available, is inexpensive, and involves no radiation exposure. This modality identifies more types of stones than does plain film, and it can provide evidence of obstruction, such as hydronephrosis and hydroureter. Ultrasonography poses difficulty, however, in visualizing ureteral (especially mid-ureteral) and very small (< 5 mm) renal stones. 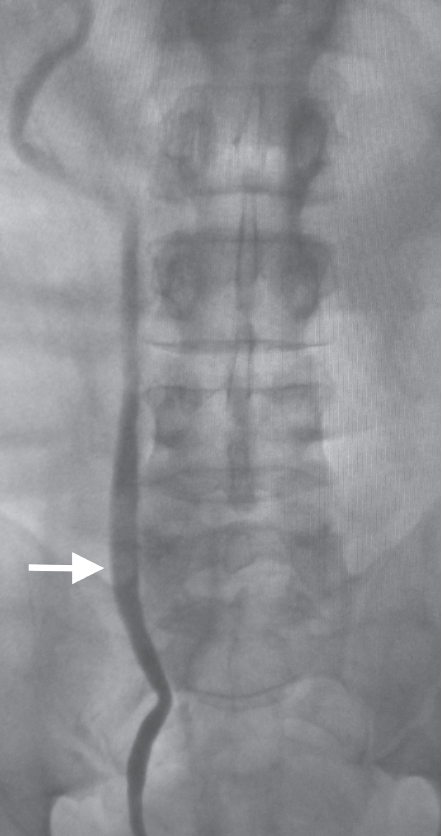 Magnetic resonance (MR) urography is the most recent imaging modality for stone disease. It involves no radiation and can provide very good anatomic detail, but it is expensive, time-consuming, and is still not available at all centers. Additionally, MR urography detects all intraureteral findings as a signal void and thus cannot reliably differentiate a stone from a tumor or clot.

Noncontrast helical CT has become the most common initial imaging test, since it has the highest sensitivity and specificity of all imaging modalities. CT detects the vast majority of urinary stones, including uric acid stones and most medication stones. Disadvantages include significant radiation exposure, greater cost, and frequently encountered incidental findings that must then be addressed.4,5 Despite the higher sensitivity of CT, a recent large randomized, controlled trial comparing bedside ultrasonography, ultrasonography by radiology, and CT for initial imaging of suspected nephrolithiasis found no difference in frequency of high-risk diagnoses, although it should be noted that 40.7% of the bedside ultrasonography group and 27% of the radiology ultrasonography group still underwent CT during the initial visit.6

PI stones are a well-reported cause of nephrolithiasis in patients receiving antiretroviral therapy. They often pose a particular diagnostic challenge because they are difficult to visualize using any imaging modality, including CT. Indinavir is the PI most widely associated with stone disease, with an occurrence rate of 4% to 13%,7,8 but atazanavir recently has been highly associated, as well.9 In a study of HIV patients on PIs, those taking ritonavir-boosted atazanavir were 10 times more likely to develop stones than those taking other PIs.10

The pathophysiology of PI stones is drug crystallization in the urine due to high urinary excretion of the unmetabolized drug, combined with poor solubility of the drug at physiologic urinary pH. The recovered stones generally are pure drug compound, as in our case. Definitive diagnosis requires stone analysis. In patients with small (<5 mm) ureteral stones but without signs of infection or refractory vomiting, a trial of spontaneous stone passage with hydration and tamsulosin therapy may be attempted.11 Patients with recurrent symptomatic stones may require a change in antiretroviral therapy.

In summary, general practitioners should be aware of the limitations of radiologic imaging for certain types of urinary stones, including PI stones. Ritonavir-boosted atazanavir appears to confer a significantly increased risk of stone formation, so urologic complaints from patients taking these medications should prompt a high index of suspicion for stone disease, even in the presence of unremarkable imaging. Sound knowledge of radiologic study qualities and the PI association with radiolucent stones will facilitate timely diagnosis and treatment.

John R. Stephens, MD, is an associate professor of internal medicine and pediatrics at the University of North Carolina School of Medicine in Chapel Hill, North Carolina.

Davis P. Viprakasit, MD, is an assistant professor of urology, the associate residency program director, and director of the Multidisciplinary Stone Program at the University of North Carolina School of Medicine in Chapel Hill, North Carolina.