A 37-year-old woman presented with progressive dyspnea of 2 weeks' duration, a low-grade fever, and night sweats. She had been a healthy marathon runner until her exercise tolerance recently declined.

The patient had no significant medical history and was not a smoker. She denied hemoptysis, weight loss, or exposure to tuberculosis and other illnesses. She reported having felt well while traveling extensively in the United States during the past 6 months.

Examination of head, ears, eyes, nose, and throat; ab­domen; and all extremities was unremarkable. Neurologic findings were normal; review of symptoms was negative. The patient's neck was supple; there was no lymph­ adenopathy. Tachycardia with a regular rhythm was noted. Coarse breath sounds with expiratory wheezing was heard.

The patient was admitted to the hospital. A chemistry panel and a complete blood cell count were normal. White blood cell (WBC) count was 17,800/µL with 80% neutrophils, 13% lymphocytes, 5% monocytes, and 2% eosinophils. Erythrocyte sedimentation rate was 112 mm/h. 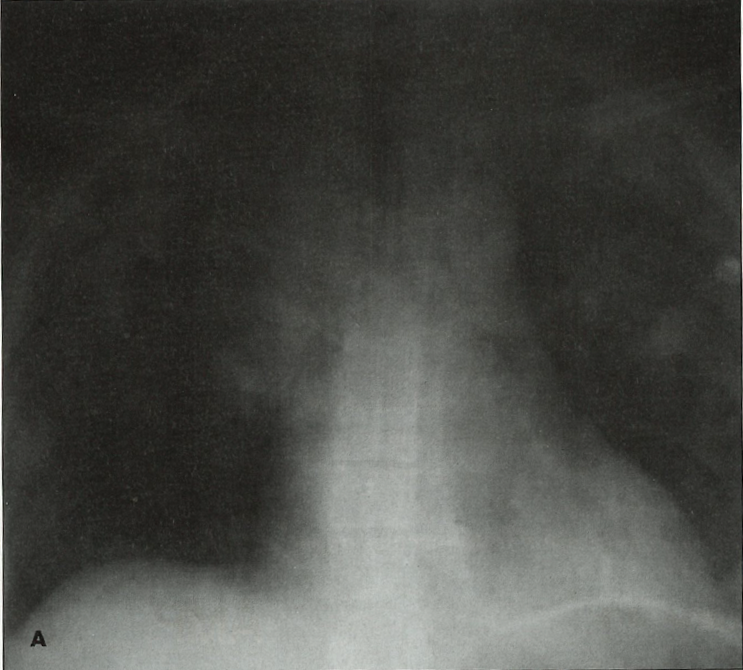 Ceftriaxone, 2 g/d, was initiated, and the patient was placed in respiratory isolation. A computed tomography (CT) scan of the chest showed bilateral peripheral fluffy alveolar opacities primar­ily in the upper and middle lobes (Figure B). Blood cultures and acid-fast and Gram stains of sputum were negative. 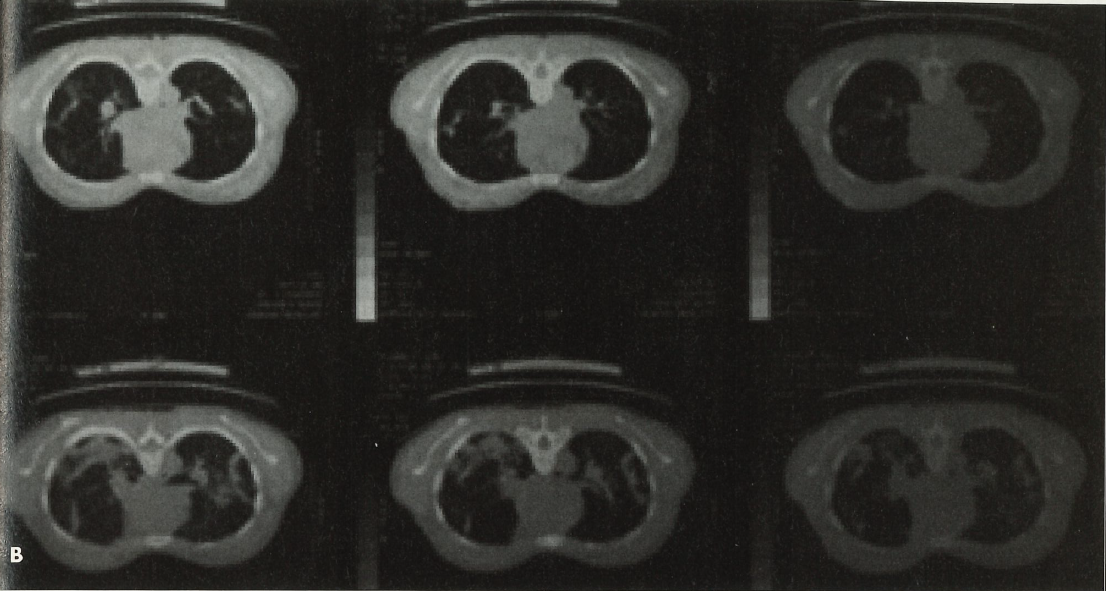 Acute eosinophilic pneumonia is an idiopathic acute febrile illness of less than 7 days' duration. It features hypoxemia, diffuse puhnonary infiltrates that are demonstrated on the chest film, and an increased percentage of eosinophils in BAL fluid. The disease either improves spontaneouslyor responds promptly to corticosteroids with no relapse.

Chronic idiopathic eosinophilic pneumonia is a rare disorder that occurs more often in women and in persons with atopy. Predominant respiratory symptoms include cough and progressive dyspnea; the most common sys­temic complaints are asthenia, fever, and weight loss.

The chest film shows puhnonary infiltrates that have the appearance of a photographic negative of x-ray find­ings in puhnonary edema. CT scanning of the lungs may reveal bilateral puhnonary opacities. The peripheral eosinophilic count may be elevated; however, it can vary throughoutthe course of the disease and may be normal. In nearly all patients, the eosinophil level in BAL fluid is strikinglyhigh. Many experts believe that evidence of pul­ monary eosinophilia obtained by either BAL or lung biop­ sy is needed to confirm the diagnosis of chronic idiopathic eosinophilic pneumonia.

The differential diagnosis includes bronchitis obliter­chopuhnonary aspergillosis, which is characterized by bronchiectasis with migratory infiltrates and puhnonary eosinophilia.

Clinical and roentgenographic evidence of the dis­ease dramatically resolves with oral corticosteroid thera­ py. The duration of treatment varies; however, prolonged corticosteroid therapy (about 6 months) is recommended for most patients because of the potential for relapse and the possibility of developing severe asthma. Relapses are common. Although it is difficult to recommend a particu­ lar regimen to treat recurrences, oral corticosteroids have been effective.

Because of the severity of her disease, this patient was given intravenous methylprednisolone sodium succi­ nate. Her condition improved dramatically; the symptoms nearly resolved after 3 doses of the medication. A 6-week course of high-dose oral prednisone was prescribed after discharge from the hospital.