These are questions clinicians want to have answered in the hopes of avoiding antibiotic resistance or associated adverse medication effects as well as reducing health care costs. Studies have shown that approximately one-third of community-acquired pneumonia (CAP) cases1 and COPD exacerbations2 are secondary to a viral etiology—cases in which antibiotics are prescribed unnecessarily. Blood culture results take 2 days on average and are positive in less than 50% of sepsis cases, making them unreliable or untimely for guiding antibiotic therapy in most instances.3 A reliable test has been long sought to assist clinicians in making these decisions.

In February 2017, the Food and Drug Administration (FDA) approved the VIDAS BRAHMS PCT automated procalcitonin (PCT) assay for use in determining the necessity of antibiotics for lower respiratory tract infections (LRTIs)—CAP, bronchitis, and acute COPD exacerbations—and determining a cessation point for antibiotics used for the treatment of sepsis.4

PCT is a protein produced by a variety of tissues in response to infection with bacteria, fungi, or some parasites, but not with viruses. Although the specific biological function of PCT in the body is unclear, stimulation of PCT release appears to be directly related to endotoxin exposure, cardiogenic shock, or trauma.5 Elevated PCT levels do not specifically differentiate among bacterial, fungal, or parasitic endotoxins, which limits the clinical usefulness of the test. However, a strong negative predictive value is demonstrated by the absence of PCT elevation in response to viral infections, making the test particularly valuable when considering the appropriateness of withholding antibiotics.

PCT is detectable in serum in as little as 4 hours from time of infection and peaks within approximately 48 hours. In addition to detecting nonviral infections, the test can be used to determine whether the selected antimicrobial treatment is effective and at what point the treatment can be discontinued due to the etiologic pathogen having been eradicated.

PCT levels are not affected by concurrent use of glucocorticoids, which tend to artificially elevate a patient’s total white blood cell count and create abnormalities in the differential.6 While the procalcitonin level cannot be used as the sole predictor of an infection, it can greatly assist in determining which patients require no antibiotics, which patients require narrow-spectrum outpatient antibiotic therapy, and which patients warrant more-aggressive inpatient management.

THE EVIDENCE FOR PCT TESTING

Procalcitonin testing has been available for years, and numerous studies of its use have been conducted. The recent FDA decision was based on the results of an extensive meta-analysis of these studies, which sought to determine a PCT-guided algorithm that could be safely used to determine the need for antibiotic treatment in patients with LRTIs, and at what levels the antibiotics could be safely discontinued in patients being treated for sepsis.7

The LRTI meta-analysis utilized data from 24 randomized controlled trials enrolling a more than 7000 patients.7 Using the determined cutoff levels, the authors of the meta-analysis determined that using PCT to guide therapy would result in a 75% reduction in the initiation of antibiotics, and a 2- to 3-day reduction in duration of antibiotic use when antibiotics were indicated.7 Antibiotic use for bronchitis declined by 40%, for COPD exacerbations by 25%, for CAP by 9%.7,8 The overall mortality rate and complication rate in the PCT-guided group were lower than those of the control group, while the average length of hospital stay was 1 day longer in the PCT group.7

Specific to patients admitted with COPD exacerbations, another study found that utilization of the PCT-guided algorithm resulted in a significant decrease in overall antibiotic initiation, as well as a decrease in duration of treatment for patients with an additional diagnosis of pneumonia, without any significant difference in intensive care unit admissions or rehospitalizations within 28 days.9

The sepsis meta-analysis utilized data from 15 randomized controlled trials enrolling more than 4000 patients. The results were equally as promising, with PCT-guided patients having an average duration of antibiotic use 1.5 days shorter than those in the control group, and with reductions in mortality and in hospital length of stay.7

The largest individual study, the Stop Antibiotics on Procalcitonin guidance Study (SAPS), was conducted in the Netherlands and demonstrated a 7% survival benefit and a 2-day decrease in antibiotic administration for patients on the PCT-guided algorithm.10 In this study, antibiotics were immediately started in all patients who were critically ill from a presumed infection but were discontinued based on the PCT level decreasing by 80% from peak or being less than 0.5 ng/mL.10,11

NEXT: What Clinicians Need to Know

WHAT CLINICIANS NEED TO KNOW

PCT-guided therapy is designed primarily for emergency department and inpatient use; however, primary care providers also should be familiar with its use in the event that patients have questions during follow-up or if it is being used to follow the case of a patient who has not been started on antibiotics for a LRTI.

For patients with a diagnosed LRTI, antibiotics are advised against when the PCT level is 0.25 ng/mL or lower. If the patient is hospitalized and antibiotics are withheld, it is recommended that the test be repeated in 6 to 24 hours and antibiotics be initiated if the level climbs above the cutoff or if the patient’s condition worsens. Outpatient recommendations are to repeat the test if symptoms persist or worsen. If antibiotic therapy has been initiated, it should be discontinued once the level drops to 0.25 ng/mL or lower or has declined by 80% or more from the peak concentration. If the PCT level remains elevated, consider antibiotic resistance or the possibility of fungal or parasitic etiologies.7

For patients with sepsis, antibiotics can be discontinued when the PCT level is 0.50 ng/mL or lower or has declined by 80% or more from the peak concentration. Resistance or an alternative etiology should be strongly considered if chest radiography findings progress, if the appearance of local infection does not improve or worsens, or if physiologic instability does not improve.7 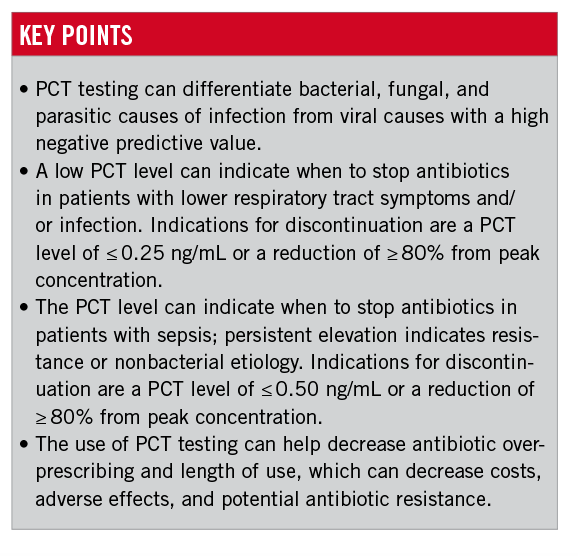 Insurance reimbursement for PCT testing may be limited to LRTIs and sepsis management and may not include coverage for uses such as monitoring of surgical infections or the diagnosis of acute pyelonephritis or appendicitis.13

PCT testing also is being assessed for its usefulness in the workup of neonatal sepsis and necrotizing enterocolitis, as well as for a host of other diagnoses.14,15

Craig Hricz, PA-C, is an assistant professor in the School of Physician Assistant Studies at Massachusetts College of Pharmacy and Health Sciences University in Manchester, New Hampshire.