A 55-year-old man presented to the emergency department (ED) with a chief concern of left eye pain, swelling, and watery discharge of 2 days’ duration. Upon review of his ophthalmology records, the symptoms were initially thought to have resulted from a recurrence of acute dacryoadenitis, for which he had been treated 6 months prior to presentation.

Physical examination. Head and neck examination findings were significant for left periorbital edema, chemosis, and watery discharge, with notable proptosis and ptosis in the affected eye. The patient was unable to open his eyelids without assistance, but he had reactive pupils and intact range of motion in the affected eye, although less robust than in the contralateral eye. Other than cervical adenopathy on the left, the rest of the examination findings were normal. 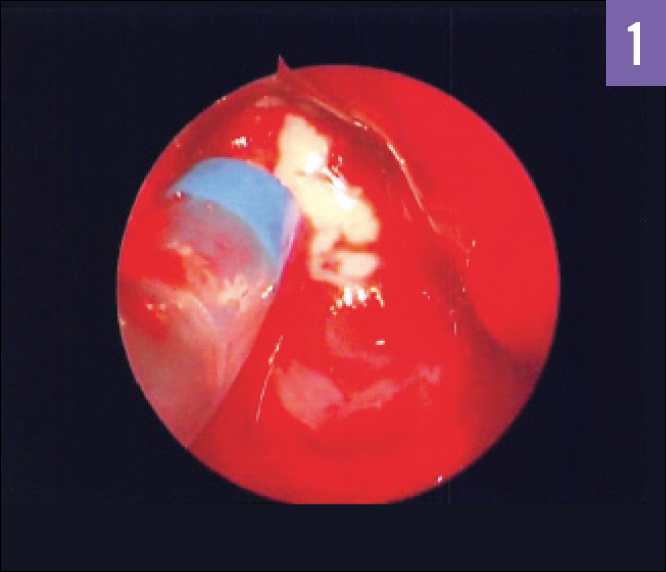 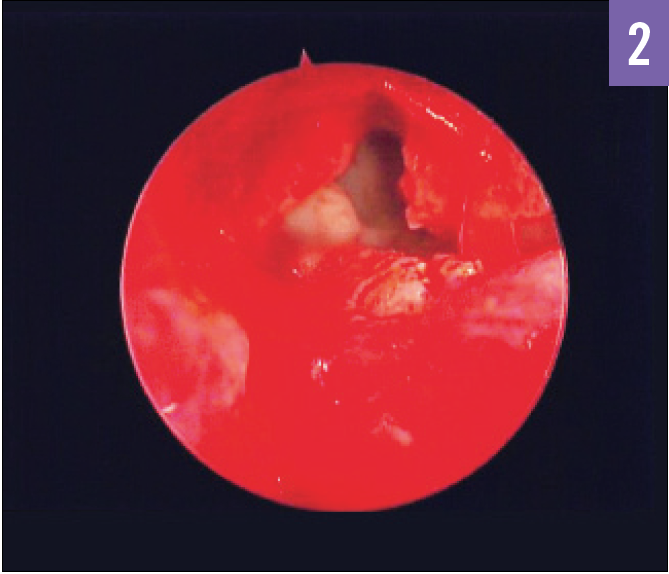 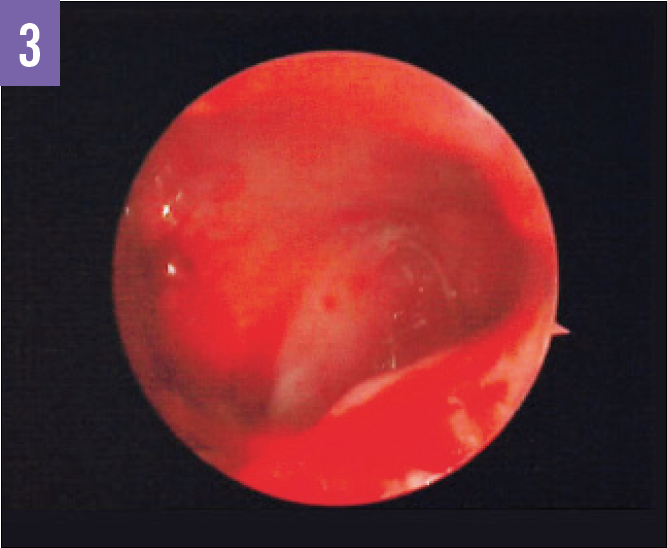 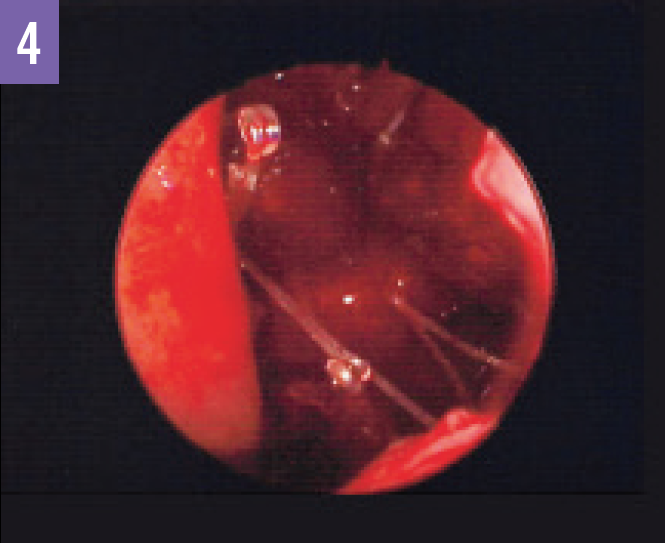 Outcome of the case. The patient’s symptoms improved after surgery and antibiotic treatment with no additional sequelae. Postoperatively, the patient was able to open the eye, and he denied pain. There was no residual visual disturbance, which had been a concern preoperatively because of the unknown extent of orbital involvement, and the range of motion was equal bilaterally. At discharge, the patient had a complete resolution of symptoms. He was asked to follow-up with his primary care provider for further care of his DM.

After his symptoms had remained stable for 6 months, the patient returned to the ED with a 5-day history of headache, clear eye drainage, left eye swelling, and rupture of the left orbit due to sinus infection. He was referred to otolaryngology, where he received a diagnosis of chronic ethmoid sinusitis. He was successfully treated with a surgical left endoscopic complete ethmoidectomy, left endoscopic frontal sinusotomy, and stereotactic computer-assisted navigational surgery with subsequent incision and drainage of the left orbital abscess. Cultures taken of the deep wound grew P aeruginosa.

Discussion. PPT, which is osteomyelitis of the frontal bone with subsequent subperiosteal abscess, is a rare but serious complication of recurrent sinus infections among adults. The condition more often occurs in adolescents and young adults.1

Percival Pott first described the condition that now bears his name in the 18th century when he recognized subperiosteal abscesses overlying osteomyelitis of the frontal bone.2 PPT classically presents with localized forehead swelling, headache, rhinorrhea, and fever. PPT is frequently associated with a history of trauma, recurrent or untreated sinusitis, or dental infection.1 Empiric antibiotic administration and surgical intervention are required to minimize intracranial complications.3 It is considered a surgical emergency.

Little literature exists about the prevalence of PPT in adults or its involvement of the orbit. One systematic review of 93 cases of PPT described 42 cases of orbital involvement, including eyelid/periorbital edema, and preseptal cellulitis.4 Postseptal involvement extending into the globe or brain architecture, such as in this patient’s case, is not only an unusual presentation, but also is a serious finding as it extends intracranially into the meninges.

CT scan of the paranasal sinuses and head is the diagnostic study of choice.5 In complicated cases, assessment of intracranial structures with MRI is preferred in order to identify abscess or meningeal involvement.2 The infection is then managed surgically. Concurrent courses of antibiotics are given after surgical intervention.

Our patient’s imaging results revealed a soft-tissue density with erosion into the supraorbital left frontal bone, as well as involvement of the left frontal sinus with extensive bony destructive changes; these resulted in the left-sided proptosis that was appreciated during physical examination. MRI results revealed a fluid collection concerning for abscess with meningeal enhancement.

The organisms isolated in PPT usually are those that most commonly cause acute bacterial rhinosinusitis. These include Streptococcus pneumoniae, Staphylococcus species, Haemophilus influenzae, and Streptococcus species, although culture results often reveal polymicrobial infections.2 Our patient’s case was noteworthy in that P aeruginosa was cultured from the abscess and blood, a pathogen that has rarely been reported in the literature in association with PPT—notwithstanding the atypical presentation of this rare disorder without noticeable swelling of the forehead.

Among the differential diagnoses of PPT are orbital cellulitis, bacterial conjunctivitis, and Graves ophthalmopathy.

Orbital cellulitis is an infection commonly found in young children, involving the ocular muscles and fat tissue within the orbit. It usually is caused by Staphylococcus aureus or Streptococcus species but also can be caused by fungi and mycobacteria. The infection is located posterior to the orbital septum and causes symptoms such as pain with ocular movements, diplopia, ophthalmoplegia, and proptosis.

Graves ophthalmopathy (also called dysthyroid orbitopathy) is an autoimmune condition causing thyroid complications. Hydrophilic glycosaminoglycan accumulation and inflammation of the tissue surrounding the orbit contribute to fibrosis of ocular muscles and adipogenesis, ultimately leading to the proptosis and periocular edema commonly seen in this condition.

The etiology of our patient’s complicated infection was thought to be multifactorial, likely as a result of chronic sinusitis in the setting of undiagnosed type 2 DM. Individuals with DM are more susceptible to common and opportunistic infections, and individuals with DM and chronic sinusitis more often develop sinus infections with isolated gram-negative rods, including Pseudomonas, than those without DM.6 It is believed that our patient’s underlying untreated DM created a perfect environment for an opportunistic pseudomonal infection to proliferate in the setting of PPT.

Recurrence of PPT is extraordinarily rare, with only one case having been reported in the literature.7

Given the rising incidence of DM, rare complications of the condition likely will become more commonplace. Age-appropriate screening for DM thus is of great importance; in addition, patients with a history of recurrent sinusitis or orbital trauma should be followed closely, since cases of PPT such as our patient’s likely can be prevented with proper medical management.