Hani Raoul Khouzam, MBBCh, MPH, is the staff psychiatrist at VA Central California Health Care System in Fresno, Calif. He is a health science clinical professor of psychiatry at the University of California, San Francisco and at the Fresno Medical Education Program. He is a consultant psychiatrist in the several counties in New Zealand.

ABSTRACT: Posttraumatic stress disorder (PTSD) is an anxiety disorder that can develop after a traumatic event is witnessed or experienced. It commonly involves actual or threatened death, serious injury, or threat to a person’s physical integrity, combined with feelings of intense fear, helplessness, or horror. Traumatic events that may cause PTSD include violent personal assaults, natural or man-made disasters, (i.e., terrorist attacks, motor vehicle accidents, rape, physical and sexual abuse, and other crimes), or military combat. Patients with PTSD continue to exhibit symptoms of anxiety, hypervigilance, sleep difficulties, anger, and irritability, in addition to psychological numbness and interpersonal, social, educational, and vocational dysfunctions. They also remember and often relive the traumatic events. The purpose of this article is to introduce primary care clinicians to the history, epidemiology, biological causes, and psychosocial complications of PTSD to review the diagnostic evaluation and the biopsychosocial and spiritual interventions that have been used in treatment.

Although it was not given a formal name, the psychiatric diagnosis that is now known as posttraumatic stress disorder (PTSD) has been recognized through the centuries by several other monikers including shell shock, battle fatigue, soldier heart, accident neurosis, as well as concentration camp or post-rape syndrome. Exposure to traumatic events has been a part of the human condition since the creation of Adam and Eve1 and symptoms of PTSD have been documented in the lives of heroes and heroines throughout history and literature—examples include Trojan War characters Agamemnon and Achilles in the Odyssey, and Shakespeare's Henry IV and Lady Macbeth.2

Researchers and clinicians first got involved in studying the plight and sufferings of Vietnam War veterans and set their goal to create a single diagnostic entity to include multiple psychiatric symptoms. As a result, PTSD was formally recognized as a diagnosis in the third edition of the Diagnostic and Statistical Manual of Mental Disorders (DSM-III), published in 1980.3

PTSD was originally only referenced as a consequence to a catastrophic traumatic event that was considered outside the range of usual human experience—such as war, torture, rape, manmade disasters (i.e., the Holocaust, the atomic bombings of Hiroshima and Nagasaki, the 9/11 terrorist attacks on the World Trade Center), natural disasters (i.e., earthquakes, hurricanes, flooding and volcano eruptions), and everyday incidents (i.e., factory explosions, airplane crashes and automobile accidents).4

Over time, the PTSD diagnosis has been revised (Table 1) to include exposure to trauma as a necessary element.5 The Diagnostic and Statistical Manual of Mental Disorders (DSM-5), published in May of 2013, reclassified PTSD from an anxiety disorder into a new class of "trauma and stressor-related disorders."5As such, a diagnosis of PTSD now requires exposure to a traumatic or stressful event—a decision made based on the clinical recognition of variable expressions of distress as a result of traumatic experience. 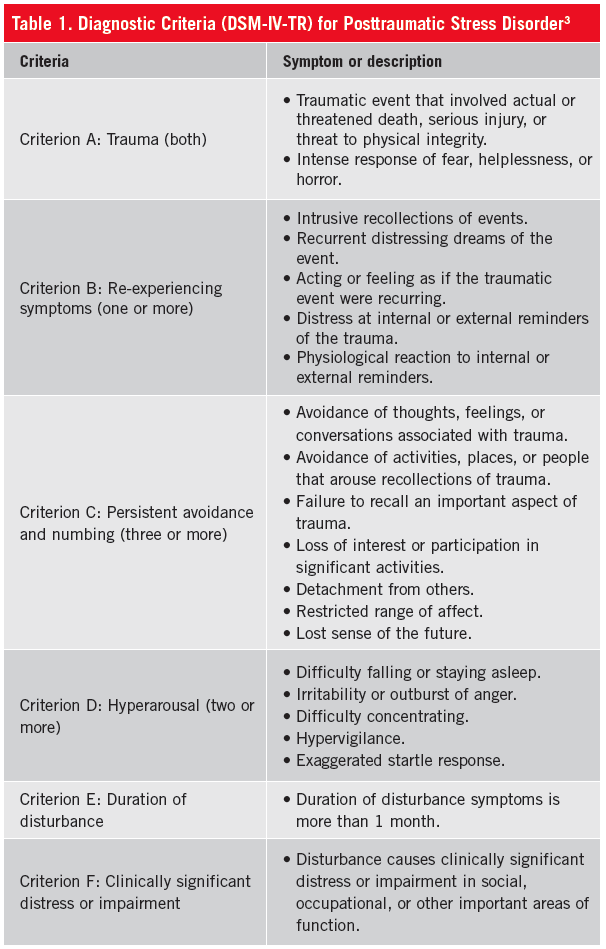 Looking at worldwide estimates, lifetime PTSD prevalence ranges from 0.3% in China to 6.1% in New Zealand.9 However, it is important to note that countries may use differing methodological approaches to collect their data and statistics.9

The estimated lifetime prevalence of PTSD among Vietnam War veterans was calculated at 30.9% for men vs. 26.9% for women.10 PTSD is estimated in 10.1% of Gulf War veterans.11 Among Operation Enduring Freedom in Afghanistan and Operation Iraqi Freedom veterans, PTSD prevalence is 13.8%.12

It is estimated that 80% of patient with PTSD will have co-occurring medical and/or psychiatric disorder.13,14 PTSD is more common among individuals with low socioeconomic status and, particularly in those living in areas in which violence is endemic.9,15 PTSD is more common in women than in men,8,15 and affects people of all ages (younger and elderly persons are the most vulnerable).13-15 Adults who are exposed to psychological trauma are at the highest risk to develop PTSD.15

PTSD is caused by experiencing, witnessing, or being confronted with an event that involves serious injury, death, or threat to the physical integrity of an individual, along with an emotional response of helplessness and/or intense fear or horror.5 The interaction between a person's biological vulnerability based on genetic (inherited) contributions, psychological characteristics, social or environmental factors, and the exposure to traumatic events could lead or prevent the development of PTSD.12-14

Biological disturbances. The main biological disturbances in PTSD seems to result from a dysgulation in the naturally occurring stress hormones and an increased sensitivity in the brain anxiety circuits.16 In addition, patients with PTSD were found to have hypersensitivity of the hypothalamic-pituitary-adrenal axis (HPA)16,17 and have increased activation in the brain anatomical fear centers—the amygdala, hypothalamus, locus ceruleus, periaqueductal gray, and parabrachial nucleus.18 Another precursor to PTSD, kindling was first described in patients who experienced seizures, where a sub-threshold electrical or chemical brain stimulation eventually lead to a full-blown seizure and subsequent chronic stimulation led to spontaneous seizures.19

Traumas that are followed by intrusive thoughts or the reliving of events might kindle the limbic nuclei, which leads to the manifestation of core PTSD symptoms—hypervigilance, avoidance, and increase startling reactions.20 It is still unknown whether these biological changes were present before the traumatic event and predisposed the person to develop PTSD or whether these changes were the result of the PTSD.15-17

Personal and psychosocial factors. The interaction between various identified psychosocial and environmental factors with personal characteristics can increase an individual’s vulnerability to develop PTSD. These factors include:

• Characteristics of the trauma itself. The trauma’s proximity and severity, as well as the duration of an individual’s exposure to the trauma, should be considered. Examples of severe traumatic events that could lead to PTSD include terrifying violent attacks, war, assault, rape, torture, kidnapping, child abuse, serious accidents, and natural or man-made disasters (Table 2).2

• Characteristics of the individual. These include prior exposure to trauma, family history, childhood adverse events like parental separation and preexisting psychiatric conditions, especially substance abuse, anxiety, or depression.22 There is also evidence of gender specificity; combat exposure, childhood neglect, physical abuse, and molestation are commonly associated with PTSD in men, while women are at a greater risk for PTSD after violent traumatic events (i.e., rape, threat with a weapon, molestation, and physical abuse).22 Clinical observations have consistently shown a correlation between the development of PTSD in adults who were traumatized as children and an association between early trauma exposure and subsequent retraumatization.23The internal and external PTSD vulnerability characteristics are summarized in Table 3.24

• Posttraumatic factors. These include the early emergence of avoidance or numbing, hyperarousal, and re-experiencing symptoms. An accurate PTSD prognosis could significantly improve with the development of posttraumatic growth and resilience (Table 4). Religious and spiritual beliefs, hopefulness, optimistic attitudes, insight, taking initiative, humor, creativity, and independence have all shown to be important factors in enhancing resilience.25,26 The traumatic event is perceived as an opportunity to turn adversity into an opportunity to achieve higher life goals.24-26 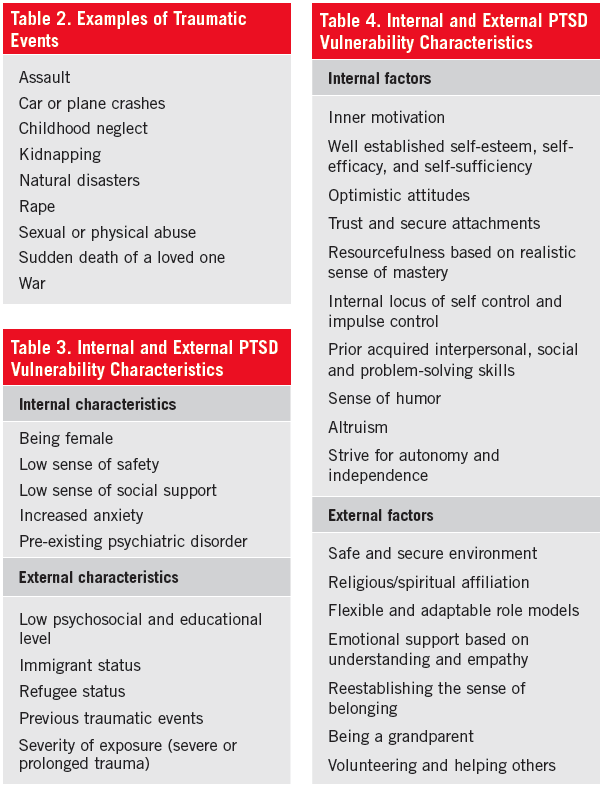 Patients with PTSD and any of these disorders may be at a particularly high risk for suicide.12,13 In addition, PTSD patients who are victims of physical and or sexual assault are at high risk for developing mental health complications, homicide, and suicide.27 Studies have shown an association between PTSD and the risk of developing dementia among older US male veterans.28 PTSD has also been linked to an increased risk of cardiovascular disease.29

Although the exception to the rule, some patients with PTSD may display altered behavior, agitation, and extreme startle reactions. They may be confused and disoriented. Memory lapse may be observed, though it could be trauma-specific or more widespread.30 Patients have been observed to have poor concentration, lack of impulse control, and altered speech.31

Mood and affect may change depending on the type and timing of the questions; feelings of anxiety, guilt, and/or fear may be predominant even in the absence of depression. Thoughts and perception may also be altered despite the absence of florid psychosis. Patients may express suicidal or homicidal ideations without a specific plan to act on them, particularly around certain anniversary dates related to the traumatic events.30,31 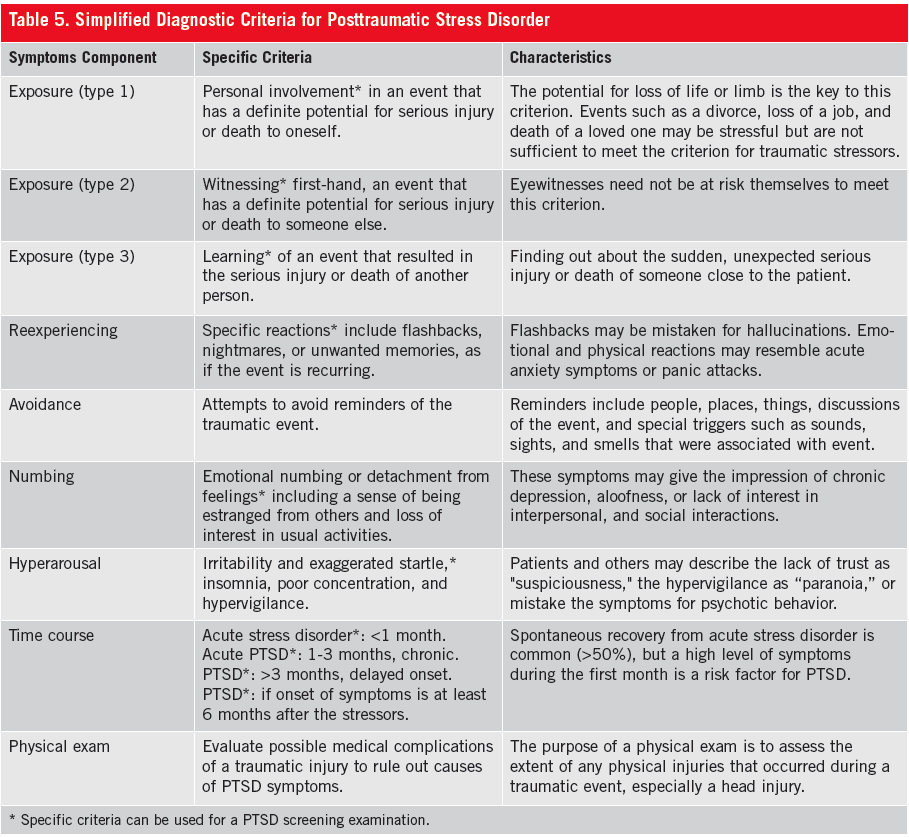 To make a diagnosis, primary care providers first need to obtain the relevant history of traumatic stress exposure and posttraumatic stress symptoms to evaluate patients for other psychiatric disorders, including PTSD.4,13,30,31 The DSM-IV-TR diagnostic criteria (Table 5), and the corresponding mnemonic “TRAUMA” (Table 6), can both serve as guides.5

In addition, there are several important associated features to evaluate:

• Depression and/or feelings of ineffectiveness, shame, despair, and hopelessness.

• Obsession with being "permanently damaged," or under constant "threat."

• Loss of religious and/or spiritual beliefs.

• Survivor guilt and preoccupation with sins of omission and/or sins of commission.

Finally, the Short Screening Scale (Table 7)32 can easily be administered in a primary care setting. 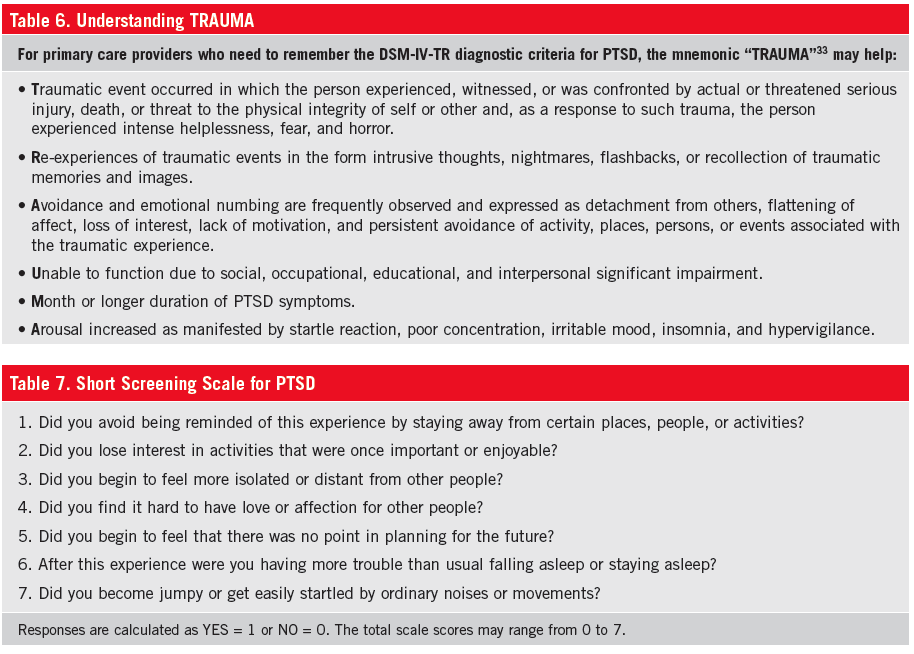 Differentials diagnosis. In the differential diagnosis of PTSD, it is important to consider acute stress disorder, dissociative disorders, depression, generalized anxiety, panic disorder, phobias, substance abuse, psychiatric manifestation of medical conditions, and malingering (Table 8).4 Primary care providers need to be keenly aware that PTSD commonly presents with the psychiatric conditions described in its differential diagnosis and to screen for signs of such co-occurring conditions during a patient’s initial evaluation.34

Physical examination. PTSD patients may have a disheveled appearance and poor personal hygiene. These patients may also present with physical injuries from recent traumatic events, such as bruises from physical abuse, injuries from assault, accidents, natural disasters, or terrorist attacks.35 The physical examination should focus on to alleviate the medical problems that may be causing the most significant distress symptoms, including insomnia, restlessness, fatigue, an exacerbation of medical problems that existed prior to the traumatic experience, and/or newly developed medical and neurological conditions. There is some evidence to indicate a relationship between PTSD and cardiovascular, gastrointestinal, musculoskeletal, and cognitive disorders.28,29 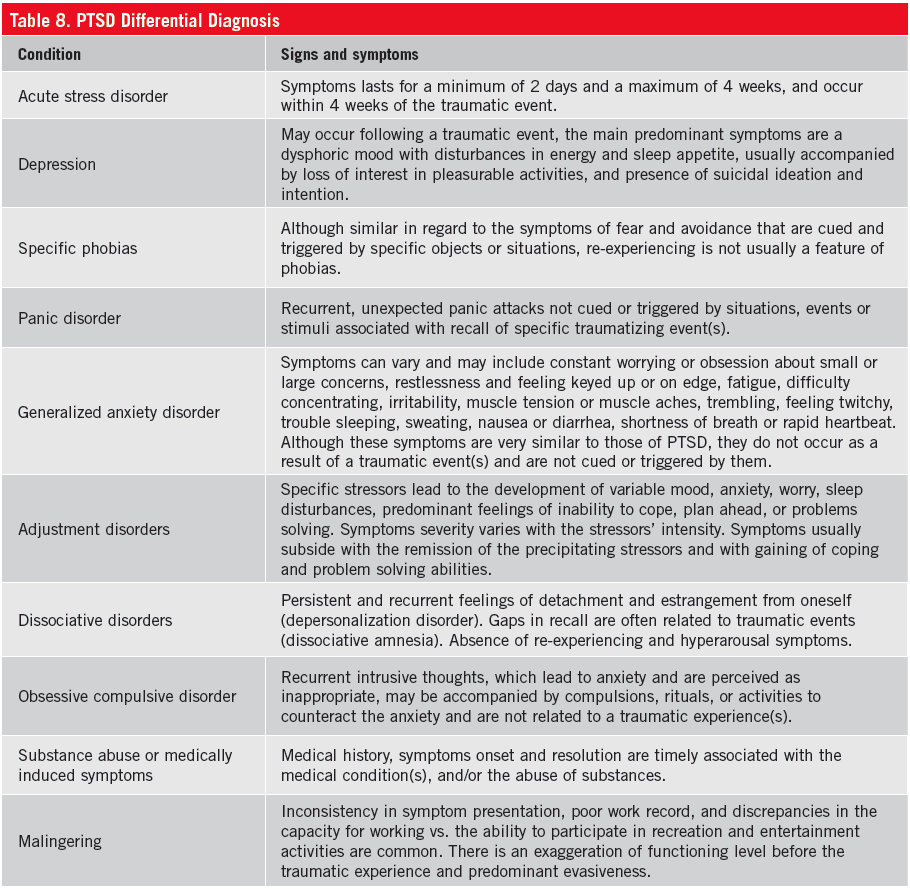 Additional research is still needed to learn more about these associations before any general conclusion can be reached on the increased co-morbidity of the physical and medical conditions, and how these bodily system dysfunctionsmay be related to PTSD.13,35,36

Laboratory testing. Although laboratory tests are not absolutely indicated for healthy individuals without physical injuries, it is important to consider screening patients with PTSD for thyroid abnormalities and substance abuse. Research studies have found decreased cortisol levels, elevated norepinephrine and epinephrine levels, and abnormal hypothalamic-pituitary-adrenal axis activity in patients with PTSD.36 Chronic insomnia and or ongoing daytime somnolence may warrant sleep study evaluation.

Brain imaging. Although routine brain imaging is not recommended for the diagnosis of PTSD, the presence of prominent cognitive symptoms could warrant brain imaging.37 Computed tomography (CT) may identify traumatic brain injuries; magnetic resonance imaging (MRI) studies of some PTSD patients have shown a decreased hippocampus size and abnormal amygdale. Studies in monozygotic twins show an association between a small hippocampus and the predisposition for the development of PTSD. The suggested laboratory and other studies for PTSD evaluation are summarized in Table 9.13,35-37

The comprehensive treatment of PTSD usually requires an integrated, multidimensional, interdisciplinary approach that combines patient education with pharmacological and psychological treatments and psychosocial and spiritual interventions. Treatment progress is often complicated by the presence of co-occurring psychiatric and medical conditions that need to be well managed. For example, if alcohol or substance abuse problems are present, they should be integrated in the overall treatment and management of patients. The September issue of Consultant will highlight treatment options for PTSD. ■

25.Bonanno GA. Loss, trauma, and human resilience: have we underestimated the human capacity to thrive after extremely aversive events? Am Psychol.2004;59(1):20-28.