Posttraumatic stress disorder (PTSD) is a rather unique psychiatric disorder in that it has an identifiable cause. Although historically it has been thought of as a consequence of military combat, many other types of traumatic experiences can lead to the development of PTSD, such as rape, physical assault, accidents, natural or man-made disasters, homicides, and suicides.1,2 Traumas that are interpersonal and intentional or those that are prolonged and/or repeated are more problematic in regards to PTSD.1,3

At least 50% of the population experiences a traumatic event, and approximately 20% of traumatized individuals go on to develop PTSD.1,4,5 The 12-month prevalence in the United States is 3.5%, and the lifetime prevalence is 8.7%.3 Higher rates are found among those at greater risk of traumatic exposure (eg, veterans, police, firefighters) and those who experience trauma such as rape and military combat.3 Women are somewhat less likely than men to experience a traumatic event, but they have a lifetime prevalence rate that is approximately twice that of men.6,7

The diagnosis of PTSD requires an exposure to a traumatic event, such as actual or threatened death, serious injury, or sexual violence, as well as the presence of a variety of symptoms,3 which are delineated in Table 1. These symptoms must be apparent for at least 1 month, and the patient must experience clinically significant distress or impairment in social, occupational, or other areas of functioning. As concerns the actual trauma, the patient must either directly experience the traumatic event, witness someone else directly experiencing an event, learn that the event occurred to a close family member or friend (if the event was violent or accidental), or experience repeated or extreme exposure to aversive details of the event (first responders).3 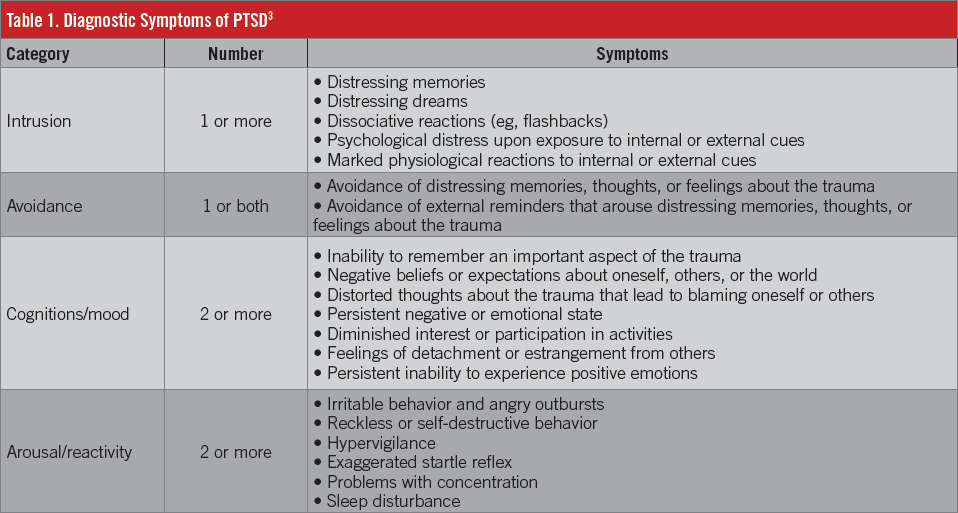 PTSD usually develops within the first 3 months following a trauma, although more delayed presentations are possible. Symptoms and symptom patterns may vary over time.3 Symptoms resolve within 3 months in approximately 50% of cases, but other patients can remain symptomatic for years.2,3

Patients with PTSD have a higher rate of comorbid psychiatric illnesses, including major depression, anxiety disorders, substance use disorders, attention-deficit/hyperactivity disorder, and borderline personality disorder, and they often experience medical problems such as chronic pain, sleep problems, sexual dysfunction, and cognitive dysfunction.7 Patients with PTSD can experience significant functional impairments and quality-of-life deficits.2,8 Moreover, they have a 2- to 3-fold increase in suicide attempts, as well as more and longer hospitalizations and a greater use of mental health care.2,7

PTSD is a complex and likely heterogeneous disease, and its exact etiology is unknown. It is intriguing to consider that some individuals who are exposed to trauma develop PTSD whereas others do not, even when experiencing the same trauma at the same time. The likelihood that an individual develops PTSD in response to a trauma might be governed by the presence or absence of various risk factors, many of which have been identified in the disease state (Table 2).3,9,10 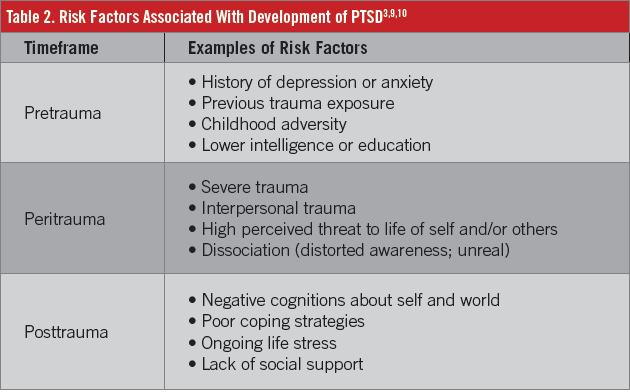 In terms of pathophysiology, some studies have shown neuroanatomic changes in PTSD, such as increased size and activity of the amygdala (ie, the emotional center), decreased volume of the prefrontal cortex, and decreased volume of the hippocampus.11 In addition to these morphologic changes, various neurobiologic changes may be involved in the pathophysiology of PTSD (Table 3), with heightened sympathetic nervous system responses and alterations in the hypothalamic-pituitary-adrenal axis being the most often cited.11-13 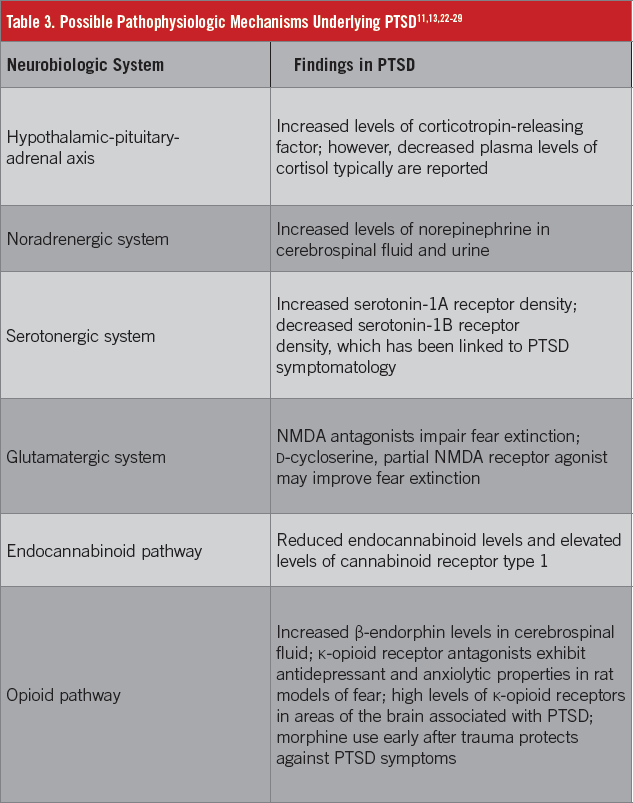 The evidence for various treatment options in PTSD has been thoroughly reviewed in a number of treatment guidelines, the most recent of which are noted in Table 4.1,4,7,10,14 There is generally a high level of agreement among the various expert treatment guidelines despite differences in their methodologies and grading systems. 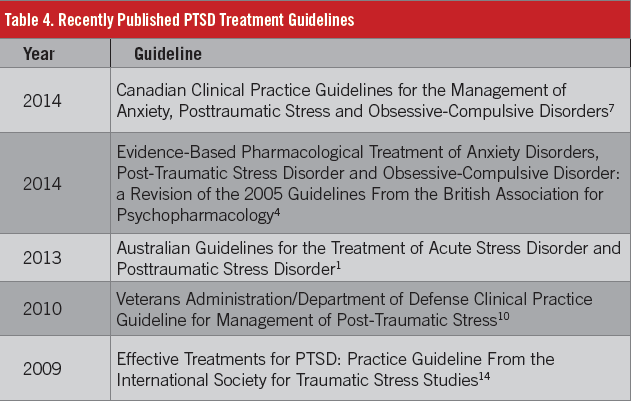 The major PTSD treatment guidelines consistently recommend various psychotherapies as first-line treatment options for PTSD.1,4,7,10,14 The usual psychological treatments for PTSD are described in Table 5.1,10,14 Cognitive behavioral therapy (CBT) is based on the relationship among thoughts, emotions, and behaviors. It is a relatively brief form of psychotherapy that is problem-focused and action-oriented.14 Numerous well-controlled studies have revealed the efficacy of several trauma-focused CBT approaches in PTSD, including exposure therapy, cognitive therapy, and cognitive processing therapy (Table 5).1,10,14 In particular, exposure therapy has a very strong evidence base.14 Eye movement desensitization and reprocessing (EMDR) includes core elements of trauma-focused CBT, but its unique feature is the use of eye movements as a central component of the procedure.1 EMDR appears to be equally effective as trauma-focused CBT.7 Stress inoculation training (SIT) is not trauma-focused; rather, it is designed to reduce the patient’s level of arousal and alter lifestyle factors that contribute to stress.1,10 Although SIT shows significant benefit in PTSD, it may not be as effective as trauma-focused CBT or EMDR.1,7 Other types of psychotherapy, such as psychodynamic therapy, family therapy, or adjunctive hypnosis, can be considered for certain patients.10,14

Medication therapy is considered an alternative first-line treatment in some PTSD treatment guidelines,4,10 whereas other guidelines deem medications as options when psychotherapy is unavailable, unacceptable, or unsuccessful.1,14 Nevertheless, pharmacotherapeutic agents (Table 6)10,12 are very frequently used in treatment of PTSD. Selective serotonin-reuptake inhibitors (SSRIs) are well-established treatments for PTSD.7,10,15 The SSRIs are by far the most extensively studied medications in PTSD, and they have been studied for both acute treatment and long-term relapse prevention.15 Sertraline, paroxetine, and fluoxetine have demonstrated efficacy in randomized, controlled trials, but only the former 2 agents are approved by the US Food and Drug Administration for the treatment of PTSD. Other SSRIs that might be useful are fluvoxamine and escitalopram.7

Venlafaxine, a serotonin-norepinephrine reuptake inhibitor (SNRI), also has good evidence for efficacy.4,10 Another SNRI, duloxetine, has limited data supporting its use for PTSD.7 The SSRIs and venlafaxine are routinely recommended as the first-line pharmacologic agents in PTSD treatment guidelines.4,7,10,14 Other antidepressants with evidence for efficacy include mirtazapine, nefazodone, amitriptyline, imipramine, and phenelzine.7,10,15 Mirtazapine often is cited as a second-line medication strategy in PTSD, but unfortunately the other medications have significant concerns that limit their usefulness (Table 6).7,10,12

Prazosin frequently is used specifically for the management of PTSD-related nightmares and sleep disturbances. This agent typically is added to ongoing first-line treatment.10,16,17 Anticonvulsants have received relatively limited study in randomized, controlled trials. Lamotrigine and topiramate have positive results in trials; tiagabine and divalproex have negative results.7,18 Other anticonvulsants, such as carbamazepine, gabapentin, pregabalin, and levetiracetam, have some degree of data supporting their use.7,18 Adverse effects and recommended monitoring parameters are considerations when using these agents (Table 6). Lamotrigine or topiramate could be considered as third-line treatments in cases of treatment failure with preferred medications, while gabapentin, pregabalin, or levetiracetam could be considered as adjunctive therapy in cases of partial response to first-line medications.7 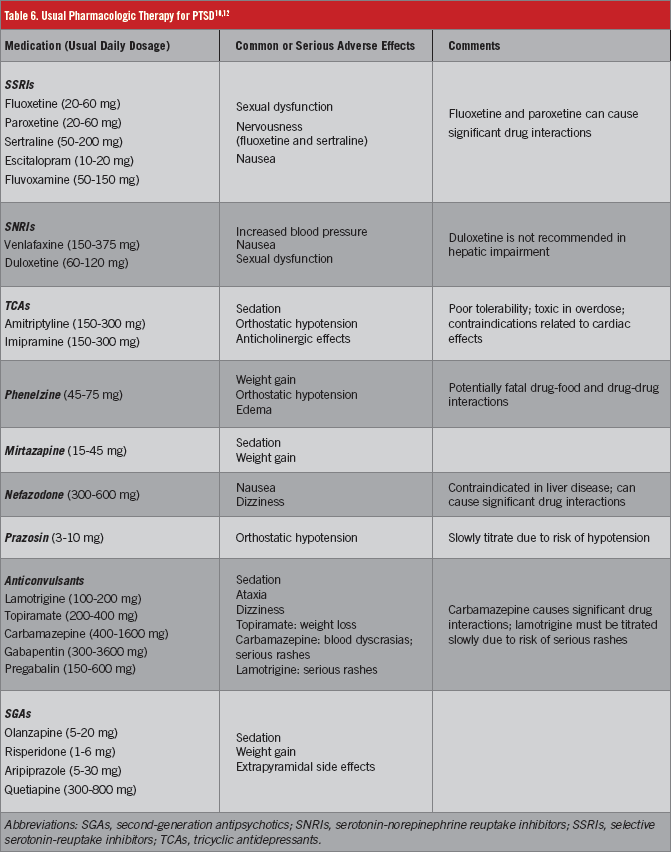 Risperidone and olanzapine are second-generation antipsychotics (SGAs) that have been fairly well studied in PTSD, and the results have been mixed.19  Aripiprazole and quetiapine have been studied less vigorously to date.7 The SGAs have the potential for significant adverse effects (Table 6); thus, they are used primarily as adjunctive treatment in cases of partial response to first-line agents.4,7

Although benzodiazepines such as alprazolam and clonazepam are frequently used in the treatment of PTSD, they are not recommended pharmacologic agents.7 They have no evidence of efficacy against core PTSD symptoms,15 and potential problems include a risk of abuse and worsened PTSD symptoms after their withdrawal.20

The chief aim of acute treatment is the reduction in frequency and severity of core symptoms of PTSD involving intrusion, avoidance, cognitions/mood, and arousal/reactivity. There should also be improvement in any comorbid conditions such as depression, anxiety, and substance use. Prevention of suicide is a paramount concern in PTSD. Given the various functional consequences of PTSD, important goals include normalization of functioning in areas such as work or school, physical health, social life, and family relationships. In general, the patient’s quality of life should be improved. Once the patient has been stabilized, the goal of continuation treatment is relapse prevention.1,12,20

A number of validated PTSD assessment scales can aid the clinician in evaluating treatment response (Table 7).1,5,21 Some scales are completed by the clinician whereas others are completed by the patient (ie, self-report). Scales that rely on clinician interviews provide the most dependable information, but they can be impracticable to use in certain environments due to time constraints; self-report scales can be more efficiently completed by patients outside of the actual clinical encounter (eg, waiting room) and provide the patient’s point of view, but they can be subject to symptom exaggeration or minimization, and their utility depends on an appropriate literacy level of the patient.12 Given these considerations, the clinician should choose suitable scales for his or her particular clinical needs.

C. Whitney White, PharmD, BCPS, is an associate professor of pharmacy practice in the McWhorter School of Pharmacy at Samford University in Birmingham, Alabama.

Katie Boyd, PharmD, BCPS, is an assistant professor of pharmacy practice in the McWhorter School of Pharmacy at Samford University in Birmingham, Alabama.

David R. Luthin, PhD, is a professor of pharmaceutical sciences in the McWhorter School of Pharmacy at Samford University in Birmingham, Alabama.

Marshall E. Cates, PharmD, BCPP, is a professor of pharmacy practice in the McWhorter School of Pharmacy at Samford University in Birmingham, Alabama.