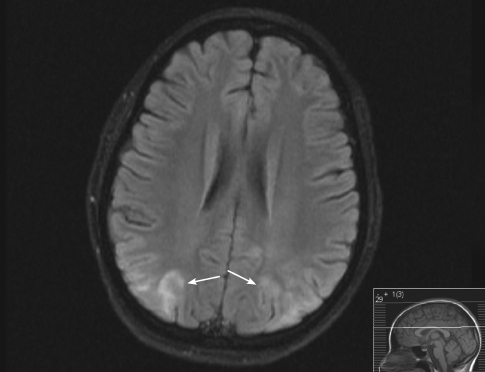 An 11-year-old girl being treated for renal failure and hypertension was found unresponsive at home in bed after a generalized seizure that, according to the child’s grandmother, lasted about 5 minutes. She had been hospitalized 23 days earlier for 2 weeks. During her hospitalization, systemic lupus erythematosus (SLE) was diagnosed and cerebritis with seizures developed, for which treatment with levetiracetam was started.

The patient was immediately transferred to the emergency department, where her temperature was 36.7ºC (98.2ºF); heart rate, 121 beats per minute; respiration rate, 20 breaths per minute; oxygen saturation, 95% on room air; and blood pressure, 144/98 mm Hg. She was not oriented to person, place, or time. She could follow simple commands but was obviously confused. Fundoscopic findings were normal. There were no signs of papilledema. She complained of weakness. She had no hand strength but when her arms were raised, she held them up without issue. She refused to lift her legs, but with pinprick testing her legs moved appropriately. She was admitted to the pediatric ICU. She remained confused during the first night of admission and was at times difficult to arouse.

An electroencephalogram was ordered because of concern for subclinical seizures. This showed periodic sharp waves from the left hemisphere thought to be either subacute infarction versus ischemia; no electrical seizures were noted. An MRI scan of the brain revealed scattered flare signal abnormalities in the bilateral parietal lobes (arrows) and a shifted area of central signal abnormality. The differential diagnosis included vasculitis, ischemia, acute disseminated
encephalomyelitis, and posterior reversible encephalopathy syndrome (PRES).

PRES was diagnosed on the basis of the clinical presentation and MRI findings. Treatment consisted of intravenous fluids, prednisone, amlodipine, and lisinipril/hydrochlorothyazide. The amlodipine was later switched to nifedipine. The patient’s blood pressure remained elevated, and metoprolol was added. Her mental status returned to baseline within 24 hours of admission. She had no other complications during the 6 days she was hospitalized and was sent home to continue
antihypertensive treatment and treatment for SLE. The prednisone dose was tapered slowly after discharge by the child’s nephrologist.

In patients with hypertension, as blood pressure becomes elevated above the baseline, the cerebral vascular autoregulatory abilities are surpassed. This results in vasodilation of the cerebral arterioles, which leads to edema of the brain parenchyma. Posterior regions of the brain are affected with rare extension into the frontal lobes. The characteristic MRI findings in PRES are believed to be due to the vascular supply in the watershed areas of the brain. MRI scans show edema of the white matter with possible extension into grey matter.4,5

Management of PRES depends on the underlying cause. With proper treatment, most patients recover within 2 weeks.6,7 Possible complications include cerebral infarction, hemorrhage, and herniation. Death is usually related to increased intracranial pressure and occurs in up to 15% of patients.8 Recurrence is reported to be less than 10%.8,9