Case Presentation
A 67-year-old lady with a history of emphysema and hypertension presented to the Emergency Department with fever, cough, and progressively worsening dyspnea for three days. She denied any chest pain or diaphoresis and had no cardiac history. She had had multiple admissions in the preceding few years for COPD exacerbation. On admission, she was febrile and had bilaterally decreased breath sounds with mild wheezing. Thoracic radiographs showed emphysematous changes but no evidence of heart failure.

After collecting blood, urine, and sputum samples, the patient was immediately started on supplemental oxygen, bronchodilators, intravenous steroids, and antibiotics for COPD exacerbation. Meanwhile, an electrocardiogram showed decreased R waves and minimal ST elevations in the anterior leads, but was basically unchanged from previous readings. Her brain-type natriuretic peptide was 609 pg/mL, and troponin I was found to be significantly elevated at 6.5 ng/mL. An emergency echocardiogram demonstrated a left ventricular ejection fraction of 20% with akinesis and ballooning of left ventricular apex (Figure 1A, 1B). An echocardiogram done three weeks earlier had been normal.

This typical presentation raised the possibility of a new anterior infarction versus apical ballooning syndrome, also known as TCM. The patient was treated with aspirin, atorvastatin, metoprolol, and lisinopril, and was hemodynamically stabilized. She was transferred to a tertiary care facility for cardiac angiography, which demonstrated severe left ventricular dysfunction with active contraction only at the cardiac base and no significant obstructive coronary artery disease. This was consistent with TCM, and recommendation was for conservative medical therapy with aspirin, statins, beta-blockers, and angiotensin-converting enzyme inhibitors. 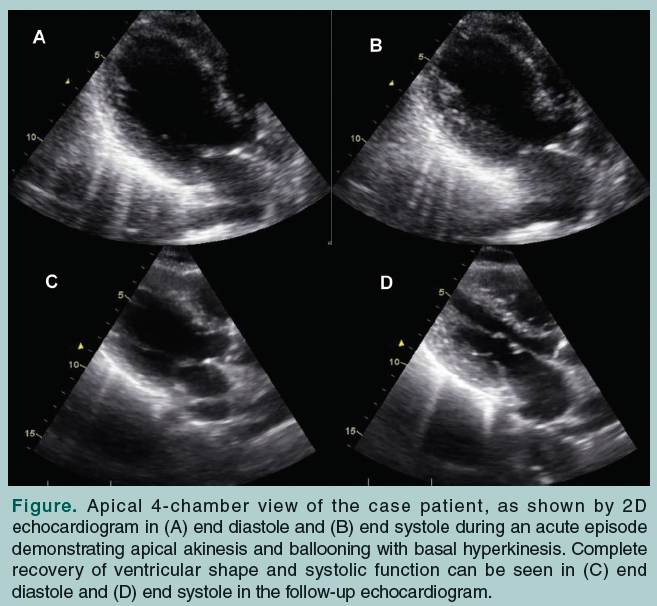 Discussion
Takotsubo cardiomyopathy was first described by Dote et al1 in 1991. The name refers to the way the left ventricle has a characteristic resemblance to takotsubo, a Japanese ceramic pot used for trapping octopus. The end systolic picture on echocardiogram during an acute episode resembles this pot, with a narrow base and a broad apex.

TCM, also referred to as stress cardiomyopathy and transient left ventricular dysfunction, is an acute, transient, and distinctly nonischemic cardiomyopathy, often precipitated by severe emotional or physiological stressors. Although the etiology of TCM is unclear, the characteristic transient left ventricular apical ballooning is generally considered to be a form of myocardial stunning. It is generally believed that acute catecholamine surges that occur secondary to severe emotional or physiological stressors such as infection lead to left ventricular dysfunction. Neither coronary ischemia nor vasospasm appears to play any significant role in the pathogenesis of TCM.2,3

A typical patient with TCM presents with dyspnea and/or chest pain following an episode of severe emotional trauma or sepsis. Electrocardiography demonstrates ST-T changes often in the precordial leads with modest elevations of cardiac enzymes. Echocardiogram shows the characteristic picture of extensive wall motion abnormality involving the apex of the heart with apical ballooning. It is interesting to note that the wall motion abnormality is, however, out of proportion to the cardiac enzyme elevation. The nonischemic etiology is furthermore confirmed by cardiac catheterization, which fails to demonstrate the presence of any hemodynamically significant luminal obstruction.4,5

The differentiation between TCM and acute myocardial infarction is often difficult due to overlapping initial presentation. The current consensus, however, is to manage nonischemic and presumed cardiomyopathic patients with aspirin, statins, beta-blockers, and angiotensin-converting enzyme inhibitors, along with nitrates and intravenous diuretics as needed. An echocardiogram is generally repeated in one to four weeks to confirm complete resolution of wall motion abnormalities. Acute respiratory failure occurring in episodes of severe asthma and acute airway obstruction has been reported to be associated with TCM in critically ill patients.6,7 Pediatric models of acute respiratory distress syndrome requiring the use of extracorporeal membrane oxygenation and experimental animal models for acute lung injury and pulmonary embolism have also been found to develop a similar clinical presentation to TCM. Furthermore, a clear relationship between the severity of the pulmonary lesion and TCM presentation has also been demonstrated.8

In our institution, acute exacerbation of COPD has been a common scenario in which TCM has occurred. Presumably, the combination of both physiological stress of hypoxia and psychological stress of acute dyspnea plays a role in triggering the syndrome. COPD exacerbation thus seems to be a definite and possibly common triggering factor for TCM. However, this direct relationship has, unfortunately, not been well described in the literature. The above case also demonstrates the need to recognize TCM in a patient presenting with dyspnea, as in COPD exacerbation, and to differentiate it from ACS as quickly as possible, due to the significant differences in the management and prognosis of either condition.

Clinicians should consider ACS versus TCM in the differential for chest pain and/or dyspnea in a patient presenting with COPD exacerbation. Early recognition of the risk factors and typical presentation should prompt the clinician for confirmation by cardiac catheterization, after initial hemodynamic stabilization. This would not only aid in avoiding the unnecessary risk of thrombolytic therapy, but also guide in more accurate prognostication of the patient’s condition. While the association between respiratory failure and COPD exacerbation with TCM is evident, the pathophysiology and exact role in precipitating the syndrome still remains unclear, and further research is needed to establish and clarify these issues.

From the Division of Cardiology, Berkshire Medical Center, Pittsfield, MA; Dr. Leppo is also from the Department of Cardiovascular Medicine, University of Massachusetts, Worcester.