A 10-month-old girl was admitted to the hospital with complaints of fever, cough, and fast breathing for 5 days. It was reported that she had been feeding poorly and had not gained enough weight in the past 5 months. In addition, in the past 6 months, the girl had a history of recurrent chest infections requiring hospitalization, with complaints of increased perspiration, generalized swelling of the body, and suck-rest-suck cycles.

On physical examination, the infant was tachypneic with chest wall retractions and cyanosis on room air. She appeared emaciated and weighed only 5 kg. Her developmental age corresponded with that of a 5- to 6-month-old infant. The girl had a frog-like posture, a protruding abdomen, and an open mouth. Generalized hypotonia was present, and bilateral lung fields had crepitations with decreased breath sounds in the left lower lobe of her lungs. Hepatomegaly was present, and a chest radiograph revealed cardiomegaly and right upper lobar opacity that were suggestive of infective etiology.

Based on the symptoms, signs, and preliminary investigations, a clinical diagnosis of Pompe disease was made. To confirm the diagnosis, a muscle biopsy was taken and sent for histopathologic study, and a blood test for acid maltase activity was conducted.

By the end of the first week in our care, the girl became afebrile and improved, but oxygen dependence persisted, along with signs of cardiac failure. Angiotensin-converting enzyme inhibitors and diuretics were titrated, and the infant started accepting liquids and semi-solids orally but was unable to swallow solids. Meanwhile, the results of the skeletal muscle biopsy showed small- to large-sized vacuoles replacing most of the sarcoplasm; small groups of atrophic muscle fibers were also seen. Periodic acid–Schiff (PAS) staining showed a variable amount of PAS-positive material in the vacuoles (Figure 2). Acid maltase activity in the patient’s blood by fluorometry was 28 nmol/hr/mg (normal > 60 nmol/hr/mg). The findings were consistent with the clinical diagnosis of Pompe disease. 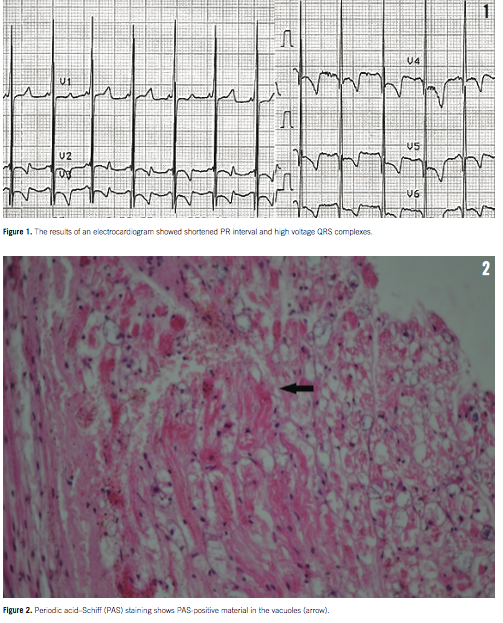 Glycogen storage disease type 2, also known as Pompe disease and acid maltase deficiency disease, is an autosomal recessive metabolic disorder caused by mutations of the gene that encodes the enzyme α-1,4 glucosidase (also called acid α glucosidase or acid maltase). This enzyme is needed to break down glycogen and thereby provide energy for the body. A deficiency in acid α glucosidase causes excess amounts of glycogen to accumulate in the lysosomes of cells, impairing the normal function of tissues, especially muscles.1

If the mutation in the family is known, prenatal diagnosis is possible by DNA. If the family does not know of a genetic defect, acid maltase activity can be measured in cultured amniocytes or chorionic villus samples. Early recognition of the clinical characteristics of Pompe disease is important. Diagnosis of Pompe disease is confirmed by biochemical assays that reveal absent or decreased GAA enzyme and enzyme activity in peripheral blood cells, skin fibroblasts, or muscle biopsy. Infants with the condition may present in the first months of life with hypertrophic cardiomyopathy, and the disease rapidly progresses.3

In 2006, the US Food and Drug Administration approved enzyme replacement therapy with recombinant human acid maltase derived from Chinese hamster ovary cells (α-glucosidase, alglucosidase alfa) for use in patients with Pompe disease. Starting enzyme replacement therapy at an early age was linked with positive short-term results such as longer survival without invasive ventilation.7 A study by Chien and colleagues found a link between infants who received a diagnosis after newborn screening with improved cardiac size, muscle pathology, growth, and motor development. Survival was significantly improved compared with untreated historical controls. When compared with treated patients who were diagnosed clinically, survival was improved but not statistically significant.8

Mutational analysis and initiation of enzyme replacement therapy could not be done in our case due to limitation of resources. Most infants with Pompe disease do not survive beyond 6 to 8 months, and approximately 75% to 95% of infants with the condition die from cardiorespiratory failure before 1 year of age.5,6 We explained the grave prognosis to the parents and offered genetic counseling to the family. The infant was sent home on supportive therapy that included diuretics for congestive heart failure, as well as oxygen and β-blockers. It was also requested that the patient return for cardiac function monitoring. Pompe disease should be considered as a possibility in floppy infants presenting with failure to thrive, repeated respiratory infections, and poor feeding.

Priyanka Nair, MD, is with the Department of Pediatrics at the Indira Gandhi Medical College in Shimla, India.

Aniruddh Setya, MD, is with the Department of Pediatrics at Nassau University Medical Center in East Meadow, New York.