A 13-year-old boy presented to the emergency department (ED) with a history of 8 hours of progressive facial swelling. He had first noticed a nickel-sized mass over his left cheek at the beginning of the school day. By 11 am, he had seen the school nurse, who observed that the area was approximately the size of a golf ball. The nurse recommended that the boy be evaluated in the ED.

At the ED, the boy denied fever, pain, or overlying skin color changes. He also denied trauma, exposure to new food or medication, or recent travel. He had not recently been ill, including upper respiratory infection, and he had not lost weight or experienced easy bruising, rashes, or joint swelling. He reported no exposure to unpasteurized dairy products. The boy was fully vaccinated and said that he had a pet dog at home. His past medical history was significant for attention-deficit hyperactive disorder, for which he was currently taking lisdexamfetamine.

Upon examination in the ED, the boy was afebrile (temperature of 37°C), with a pulse of 108 beats/min, respiratory rate of 20 breaths/min, blood pressure of 124/75 mm Hg, and oxygen saturations of 99% on room air. He appeared to be comfortable and in no distress. The results of a physical examination were significant for left-sided facial swelling over the parotid gland that extends upward to include the left eyelid, left forehead, and left frontal and parietal scalp. The swollen area was nontender, nonfluctuant, and without erythema. His oropharynx was unremarkable with good dentition, and his tympanic membranes appeared unremarkable bilaterally. The boy had no proptosis of the eye and had full extraocular movements. No lymphadenopathy was observed, and his neck was supple. The rest of his physical examination results were unremarkable.

Ultrasonography of the area was ordered, and results revealed soft tissue swelling of the left parotid region with subcutaneous gas. A subsequent chest radiograph showed no pneumothorax or pneumomediastinum. A facial computed tomography (CT) scan was conducted, and results showed extensive air in the left parotid gland and left periparotid space, filling the left peripharyngeal space and suprazygomatic masticator space, and tracking anteriorly around the left orbit (Figures 1-3). 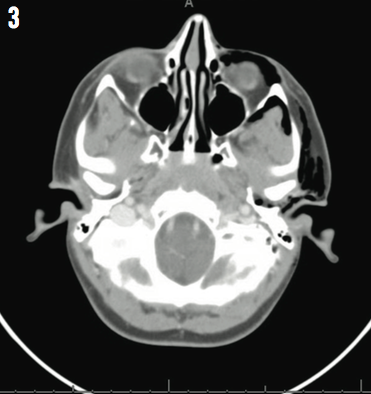 Based on clinical examination findings and imaging results, the boy was diagnosed with pneumoparotid.  He later recalled playing his trumpet the night before his symptoms occurred. The patient was managed conservatively and was told to avoid any form of oral insufflation, including trumpet playing. He was discharged home from the ED, and his symptoms resolved within 2 days. He resumed trumpet playing with cheek modifications to prevent recurrence.

Pneumoparotid is a rare cause of parotid gland swelling and craniofacial emphysema. The incidence is unknown, and a literature review consists mainly of case reports. The condition occurs when there is a rapid increase in intraoral pressure, causing air to enter into the Stensen duct. This air then migrates to the parotid gland, causing swelling. In some cases, the air will rupture the parotid acini and cause craniofacial emphysema.1 It is important to note that this air can also travel to the cervical region and mediastinum. Interestingly, trumpet playing has been documented to increase intraoral pressure from 2 to 3 mm Hg (normal) to the potentially problematic 150 mm Hg.2

The evaluation of pneumoparotid should consist of a chest radiograph to determine whether pneumothorax or pneumomediastinum are present, as these could be life-threatening complications. Most case reports describe the use of a CT scan for diagnosis. However, a physical examination, detailed clinical history, and radiograph may be sufficient.3 Management of pneumoparotid is conservative and involves avoiding the causative factor.

Lori Pandya, MD, and Jo-Ann Nesiama, MD, MS, are from the Children’s Medical Center, a part of the University of Texas Southwestern Medical Center in Dallas, Texas.