Pneumonia and Pneumonitis From Legionella pneumophila

A 9-year-old boy presented to a pediatric hospital for evaluation of fever, cough, and nasal congestion that had been present for 4 days. The cough had been persistent and productive of green sputum. His maximum temperature had been 38.9°C, with daily fever.

His history is significant for Down syndrome and for leukemia that had been in remission for 8 years. He had undergone tonsillectomy and adenoidectomy 3 weeks ago.

The boy was started on levalbuterol and oral corticosteroids and was given 2 doses of intramuscular ceftriaxone over the next 48 hours. Despite the antibiotic, his fever continued and his cough worsened. He was admitted to the pediatric hospital.

On admission, his white blood cell count was 39,000/µL, and his and C-reactive protein level was 29.3 mg/L. A chest radiograph revealed a right upper lobe consolidation (A). He was started on cefuroxime and nebulized albuterol. 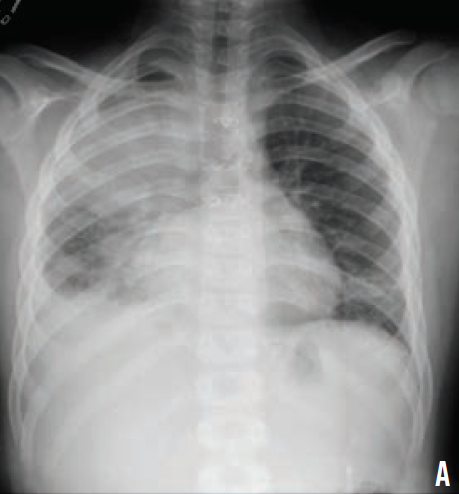 Because of his worsening leukocytosis and respiratory status, he was transferred to the intensive care unit. An infectious disease specialist was consulted, and laboratory studies for various viruses and bacteria were ordered. Vancomycin and meropenem were started. Due to progressive respiratory distress and eventual respiratory failure, the patient was intubated. A computed tomography scan of the chest showed necrotizing right lung pneumonia with diffuse pneumonitis (B). Urine cultures were positive Legionella pneumophila, and he was started on intravenous azithromycin. 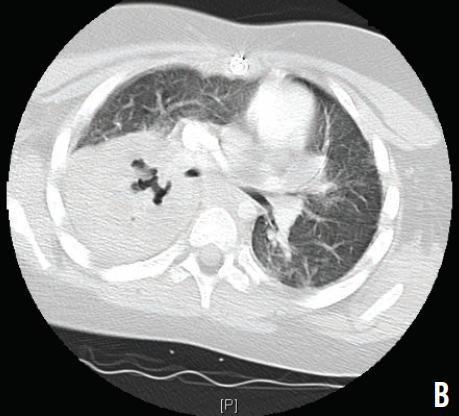 Over the remainder of his hospitalization, he recovered well and was extubated. He went on to complete a course of azithromycin as well as 25 days of vancomycin and meropenem. He eventually was discharged and continued to do well, without pulmonary sequelae.

L pneumophila are aerobic, Gram-negative bacilli that are normally found throughout the environment. The bacteria are transmitted via inhalation of aerosols or via aspiration. Legionella grow more readily in warm water sources such as water heaters, evaporative condensers, cooling towers, whirlpool baths, humidifiers, and nebulizers. Once the bacteria have invaded the macrophages, an inflammatory response is triggered, leading to necrosis and infiltration of the tissues. L pneumophila causes 2% to 15% of community-acquired pneumonia in the United States.

Treatment with parenteral azithromycin is recommended for all patients until defervescence, followed by a 7- to 10-day oral course of the antibiotic. Trimethoprim-sulfamethoxazole, levofloxacin, an

Although legionella is a rare cause of pneumonia in children, it should be considered in cases of pneumonia presenting after intubation or with hyponatremia.