A Pink Patch on an Teen’s Abdomen, and a “Christmas Tree” on Her Back

A 17-year-old presented with an asymptomatic salmon-pink patch on her abdomen. Five days after the patch had appeared, she developed a generalized eruption on the body. The eruption was slightly pruritic. She was not on any medication, and her past health was unremarkable. There had been no prodromal illness.

On examination, the patient was afebrile. An oval, salmon pink, scaly lesion measuring 2 cm was present on the left side of the abdomen (Figure 1). A generalized, bilateral and symmetric, papulosquamous eruption was seen on her body. The axes of the lesions on her back were along the skin lines of cleavage, giving rise to a “Christmas tree” appearance (Figure 2). The rest of the physical examination findings were normal. 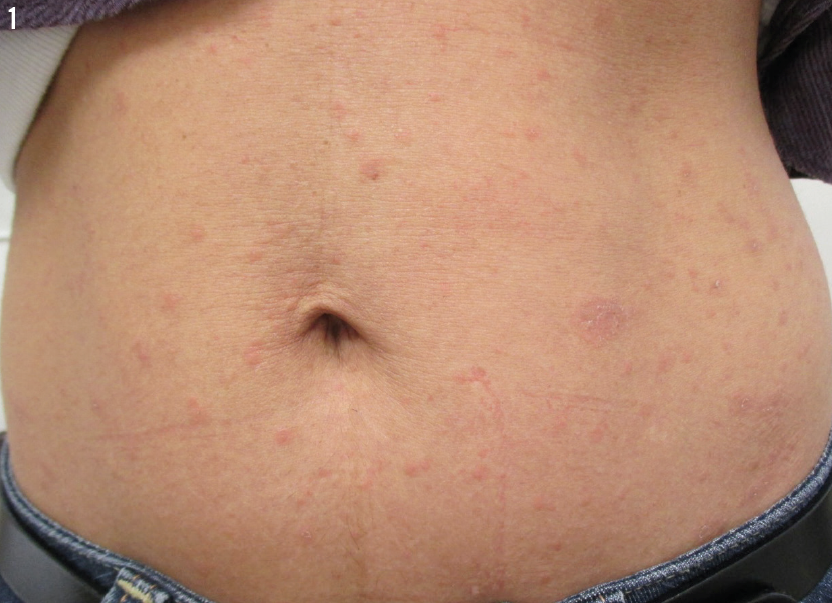 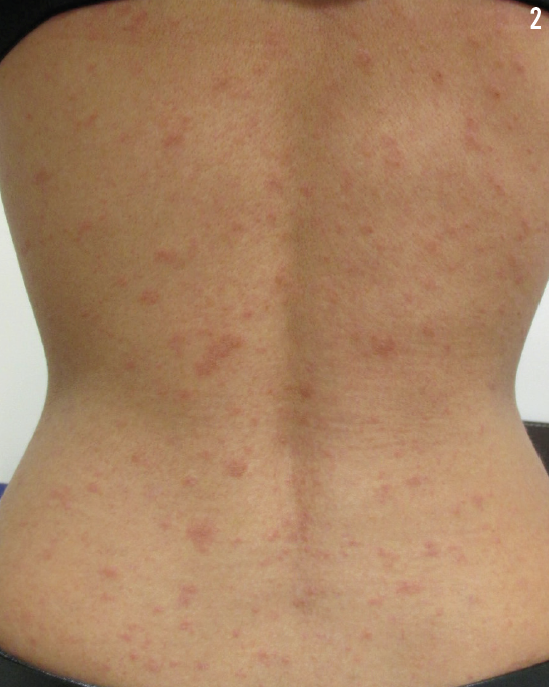 Pityriasis rosea is a common, acute, self-limited papulosquamous dermatosis that primarily affects children and young adults.1 The condition is characterized by a “herald patch,” after which oval, erythematous, squamous lesions appear along the Langer line of cleavage.2

Pityriasis rosea derives its name from pityriasis, meaning scaly, and rosea, meaning pink.3 The condition was first described by Camille Gibert in 1860; hence the disease also is known as pityriasis rosea of Gibert.4

Most episodes occur in individuals between 10 and 35 years of age.5,6 The peak incidence is during adolescence. The condition is rare in children younger than 2 years of age. The male to female ratio is approximately 1 to 1.4.7 Most cases occur in the spring and fall. Pityriasis rosea accounts for 6.8 per 1,000 dermatologic patients.2 The average annual incidence is estimated at 172 per 100,000 person-years in the United States.8 Although pityriasis rosea occurs worldwide, the disease is more common in dark-skinned individuals.5

A viral etiology has been proposed because of the seasonal variation, clustering in communities, and symptoms of antecedent upper respiration tract infection found in some patients. Human herpes virus 7 (HHV-7) and, to a lesser degree, HHV-6 have been implicated, based on the detection of HHV-7 and HHV-6 DNA in serum and saliva, and mRNA expression and specific antigens in skin lesions of some of the affected patients.5,9 The disease is believed to be a delayed hypersensitivity reaction to an infectious agent. An immunohistochemical study suggests that T lymphocyte-–mediated cell immunity plays an important role in the pathogenesis of pityriasis rosea.10

The most common presenting sign, found in 50% to 90% of patients, is a “herald patch” or “mother patch.”3,11 The patch begins as a smooth, erythematous papule or macule. The papule expands over 1 to 2 weeks and clears centrally to form an oval or round, pink or erythematous lesion with a “collarette” of scale that can range from 1 to 10 cm in diameter.11,12 The herald patch is asymptomatic and is larger and more noticeable than the lesions of the later eruption.3 A herald patch can occur in other conditions as well, notably erythema multiforme.1 Thus the mere presence of such a patch is not diagnostic of pityriasis rosea.

A mild prodrome consisting of headache, fever, malaise, anorexia, sore throat, and arthralgia occurs in approximately 5% of patients and might reflect the effects of a viral illness that has triggered the development of the exanthem.11 A generalized, bilateral, symmetric eruption develops in approximately 4 to 14 days (4 days in children vs 14 days in adults) after the appearance of the herald patch and continues to erupt in crops over the next 12 to 21 days.5,13

Typical lesions are 5 to 10 mm, oval, dull pink macules with a delicate collarette of scales at the periphery.11 The long axes tend to be oriented along the skin lines of cleavage (Langer lines) of the trunk and proximal extremities.11,13 The distribution on the back thus forms a “Christmas tree” or “fir tree” appearance that can be extremely striking.3

In some children, particularly African American children, the condition may present with an inverse distribution, with lesions mostly on the scalp, face and extremities but sparing the trunk.3 Rarely, the axillae, groin, genitalia, palms, and soles may be affected.11,13

Oral lesions are uncommon and include punctate hemorrhages, vesicles, and bullae.3 The condition often is asymptomatic but can be pruritic.6,11,13 Significant systemic manifestations are characteristically absent.

The diagnosis of pityriasis rosea is mainly a clinical one that is based on characteristic physical findings. The atypical variants of the condition can pose diagnostic challenges.

Dermoscopic examination of the lesion may aid in the diagnosis. Typical dermoscopic findings include yellow background, dotted vessels, and peripheral scales.16

There is no laboratory test to confirm the diagnosis. A potassium hydroxide wet-mount preparation is useful to rule out fungal infection. A skin biopsy or referral to a dermatologist should be considered if the diagnosis is in doubt.

The disease is usually self-limiting. The typical course is 6 to 8 weeks, although durations as short as 2 weeks have been reported.2,19 Relapsing pityriasis rosea accounts for 1.8% to 2.8% of cases, with most recurrences occurring within 1 year.19 Although it is extremely rare, a persistent form also has been described, presumably due to persistent active HHV-6 and HHV-7 infection.19

The patient should be reassured of the benign nature of the disease.7 Pruritus, if present, can be managed with a topical corticosteroid, a topical lotion that contains pramoxine or menthol, and/or an oral antihistamine. Increased natural sunlight for the duration of the condition can be helpful. For the vast majority of cases, no other treatment is necessary. In severe cases, treatment may be considered for cosmesis that has a significant negative impact on quality of life. Treatment aims to shorten the duration of the disease. Treatment options include acyclovir, erythromycin, and UVB phototherapy.1,6 Studies have shown that oral acyclovir (particularly if started early in the course of the condition) and, to a lesser extent, oral erythromycin are effective in the treatment of pityriasis rosea without significant adverse events.9,20 Head-to-head comparison studies have shown that oral acyclovir is more effective than oral erythromycin in the treatment of pityriasis rosea.21,22