A 14-year-old boy was brought by Child Welfare Services and the police for a pre-placement examination before entering foster care. The patient had been in foster care for the last 6 months after an allegation of maternal drug use; he had run away from his last foster home. He was found with a 13-year-old friend and his 17-year-old brother--both of whom were also on the run and in foster care.

The patient had a history of marijuana use, as noted on a toxicology screening. Before entering foster care, he and his older brother and 3 younger siblings had been living with their mother. The patient had not seen his father in at least 10 years. He attended school occasionally and earned poor grades.

He admitted to smoking cigarettes and "weed" but denied smoking "ice" (methamphetamine) because it "messes up your brain." He was sexually active but unable to remember the number of his partners. He used condoms intermittently. He denied gang affiliation and had never been hospitalized or had surgery, broken bones, or sutures. He had no chronic illnesses or known allergies but had not seen a doctor in several years.

Allyson Cordoni, CNP, of the Kapiolani CARE Program in Honolulu, writes that the patient had 3 circular healing wounds of varying diameters on the lateral and inner aspects of his upper left arm (A). The patient volunteered that he had inflicted these wounds with a cigarette in an attempt to tattoo himself to symbolize his "crazy life." (He was right-handed.) "Smiley faces" had also been tattooed on his hand with a lighter (B). There were no tattoos, body piercings, or body mutilation other than those mentioned. 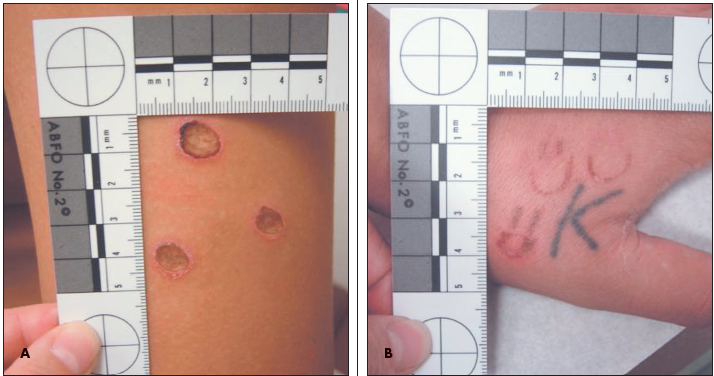 The patient was given a prescription for an antibiotic ointment that was to be applied twice a day until the wounds healed.

A hepatitis panel was negative; the patient was HIV-negative. Results of a drug screen were also negative. An appointment was made for a 45-day follow-up comprehensive examination, including a behavioral/ psychological evaluation. Child Welfare Services subsequently reported that the boy was again on the run and could not be located.

Adolescents who tattoo themselves may exhibit other high-risk behaviors.1,2 Screening includes a thorough history and use of a behavioral screening tool with each physical examination. A brief screening during acute visits should also be used in an attempt to identify these behaviors. A visual examination of the tattoo for signs of infection is also important, as is counseling about the risks associated with self-tattooing.