This lesion on the chest of a 6-week-old infant had developed over 2 days (A).
It began as a small mass just below the right nipple. Initially, there was no tenderness or erythema; within 2 days, the lesion had begun to drain green-yellow and then white purulent exudate. 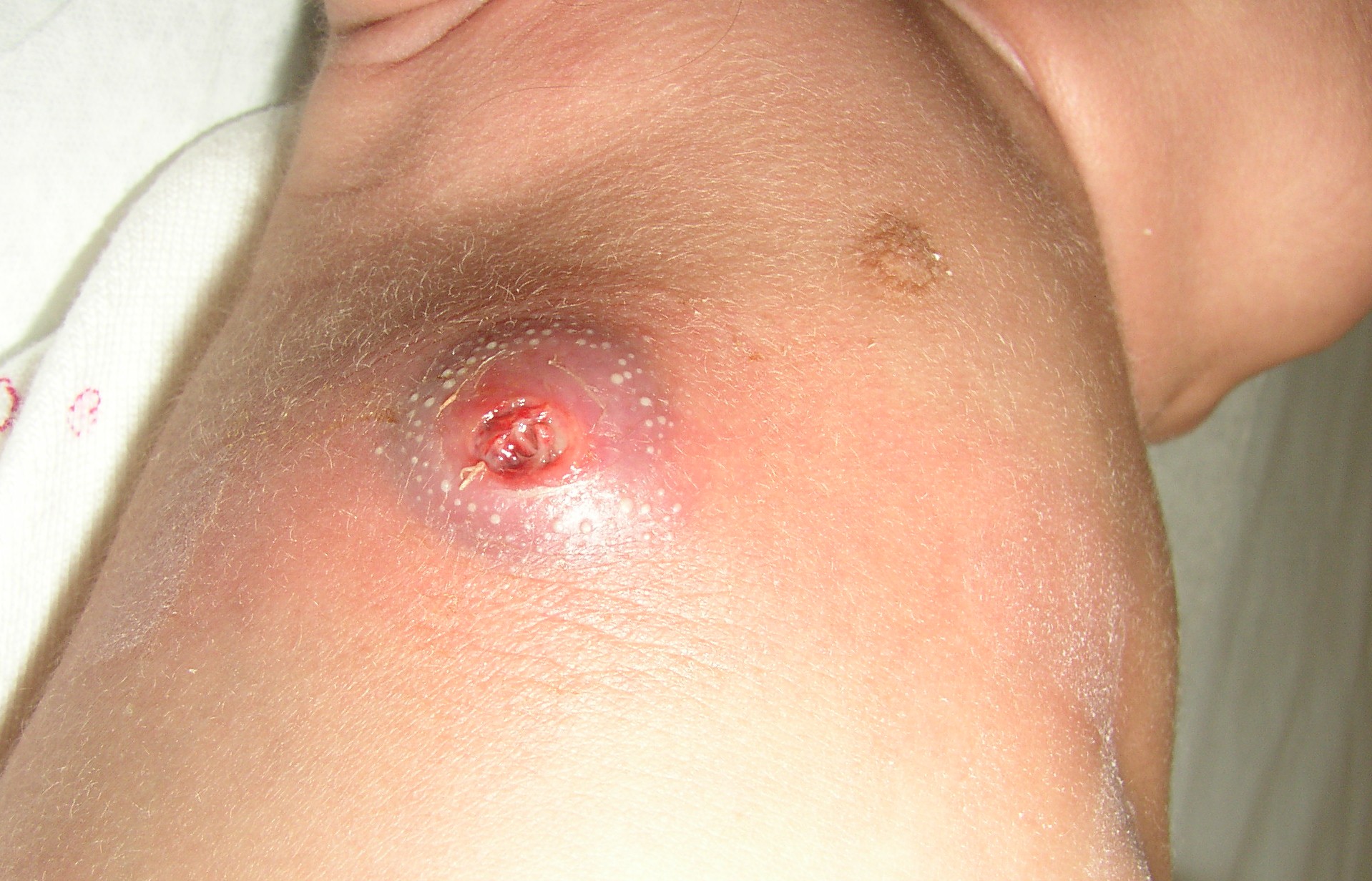 The infant had been discharged from the neonatal ICU 2 days before she presented to the pediatric emergency department (ED). She had been born at 29 weeks' gestation and weighed only 1.47 kg (3.27 lb); she also had anemia. She had not needed a central venous catheter or chest tube while in the neonatal ICU. Her parents reported that she had shown no signs of infection on the day of discharge, when she was feeding well and was afebrile.

In the ED, the infant was afebrile and in no apparent distress; her heart rate was 164 beats per minute. Examination revealed moist mucous membranes, clear tympanic membranes, lungs clear to auscultation, and benign abdomen. There was no murmur.

The lesion measured 1 3 0.5 inches; there was clear discharge from the center of the lesion and mild erythema and induration surrounding the perimeter.

A chest radiograph showed a thickening of the right lower chest wall and a localized soft tissue density (about 1.5 cm) with a possible intrathoracic extension (B). 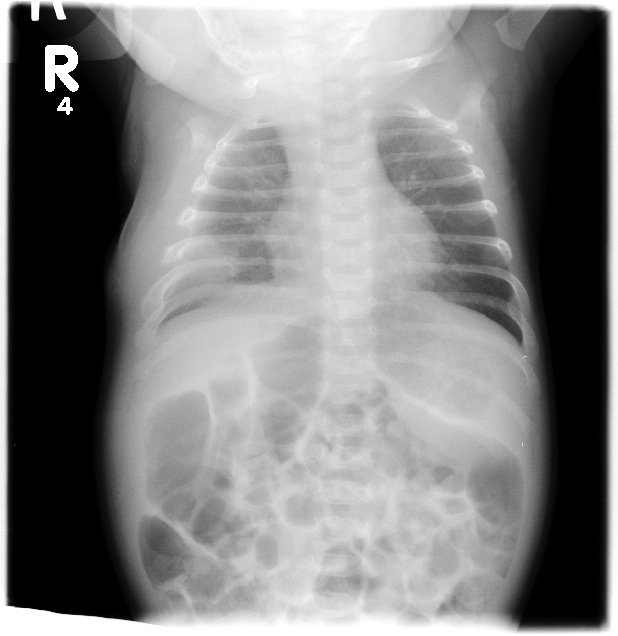 A chest CT scan with contrast showed a chest wall mass of 1.3 3 1.8 3 2 cm displacing the lateral segment of the right middle lobe, contiguous with a bilobulated intra-extrathoracic mass with necrotic centers and thickened irregular walls of 2 cm (C). 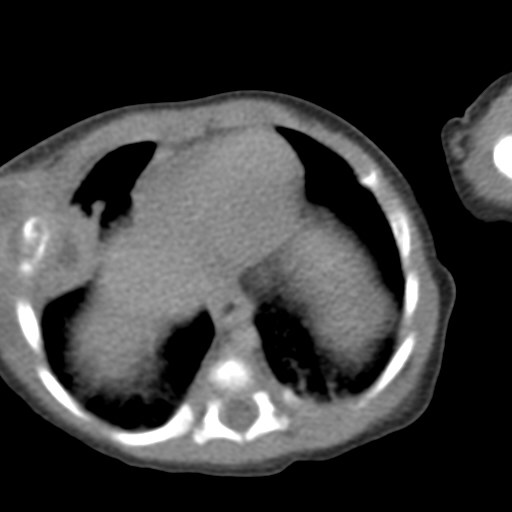 The mass involved the distal end of the right seventh rib, which had an irregular bony cortex.

The lesion responded partially to antibiotic therapy. On day 7 of hospitalization, a Broviac port was placed to secure central venous access and a biopsy of the lesion was performed. Results showed skin and subcutaneous tissue with granulation tissue and a small focus of resorbed bone, which confirmed the diagnosis of osteomyelitis.

S aureus belongs to the Micrococcaceae family and grows as Gram-positive cocci in clusters. Unlike other staphylococcal species, S aureus produces coagulase and other enzymes (such as lipase, protease, and hyaluronidase(), which can disrupt and destroy tissue and cause abscess formation as well as osteomyelitis. MRSA is found in tertiary care hospitals as well as in the community and can be acquired via contact with skin, blood, or respiratory droplets or through an iatrogenic cause.1

Osteomyelitis, which is commonly caused by S aureus, can occur weeks after the removal of intravenous catheters, lumbar puncture, or minor skin trauma.2 Premature infants, such as the one in this case, are at high risk for this type of infection. Other causes such as tuberculosis were less likely, since most subcutaneous tuberculous abscesses occur in HIV-infected adults.2 Furthermore, the patient had spent only 48 hours in the community.

A heightened level of suspicion is essential in premature infants--even when signs or symptoms of infection are absent. This infant had none of the classic signs and symptoms of osteomyelitis. The abscess and osteomyelitis were occult for more than the 36 hours that elapsed until parental discovery. Data indicate that neonates usually show signs of bone destruction within 7 to 10 days.3,4 Although many premature neonates lack the ability to mount a febrile response, prematurity was less likely a factor in this patient because she was 6 weeks old at the time of presentation. Interestingly, the blood culture results were negative, despite the eroded osteomyelitic seventh rib and pus drainage.

In children aged 4 months to 17 years, incision and drainage without antibiotic therapy has been effective for the management of a community-acquired MRSA skin abscess.5 However, premature infants with an MRSA skin abscess usually require both treatment modalities.

This patient's abscess slowly resolved. She was discharged 4 days after admission to complete a total of 6 weeks of treatment with intravenous vancomycin. At follow-up, the port was removed and the patient was doing well.