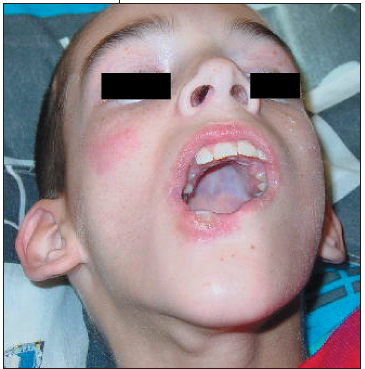 This 14-year-old boy has Lesch-Nyhan syndrome. The picture shows chronic scarring of the lip--a result of self-mutilating behavior that characterizes this syndrome. Lesch-Nyhan syndrome is also characterized by dystonia, choreoathetosis, and mental retardation--all of which are associated with hyperuricemia, write Arvind Vasudevan, MD, and Atiya Khan, MD, of Morgantown, WVa. This X-linked recessive abnormality of the long arm of the X chromosome (Xq26) causes a deficiency of hypoxanthine-guanine phosphoribosyltransferase (HGPRT) in the brain, liver, and red blood cells.1 In the United States, this condition may be as rare as 1 in 1.2 million.2 Because of the mode of transmission, this disorder affects males primarily; however, cases involving females have been reported.1 Partial variants of the syndrome involving decreased, but not entirely absent, levels of HGPRT also have been identified.2

At birth, the child with Lesch-Nyhan syndrome usually appears normal. Hypotonia and developmental delay occur subsequently, followed by prominent pyramidal and extrapyramidal signs--including spasticity, dystonia, and hyperreflexia. Marked choreoathetosis and blepharospasm usually occur in the second year of life. Hyperuricemia and hyperuricosuria manifest as an orange to brown powdery substance in the urine (urate crystals). Nephrolithiasis can occur in children who are younger than 6 years; subcutaneous tophi of urates and gouty arthritis may develop later. The chief complication is renal failure secondary to nephrolithiasis.

The compulsion to self-mutilate can result in severe injuries to the fingers, lips, and tongue, as was the case in this child. Older patients with this syndrome typically find ways to restrain this behavior; they may even ask for physical restraints during times of stress. Affected children are rarely able to resist self-mutilation.

An elevated serum uric acid level of 4 to 5 mg/dL and a uric acid to creatinine ratio greater than 4 to 5 times normal in a child with dystonia and self-injurious behavior is usually diagnostic. Tests for HGPRT enzyme deficiency can confirm a questionable diagnosis. Because Lesch-Nyhan syndrome can mimic cerebral palsy, it is important to screen children with an initial diagnosis of cerebral palsy for Lesch-Nyhan syndrome, especially if the prenatal and perinatal courses were normal.

Prevention of renal failure requires the management of hyperuricemia with allopurinol(. Hydration can aid in the reduction of stones. The judicious use of restraints, the removal of teeth, and behavioral modification can minimize self-mutilation.

Genetic counseling and prenatal screening should include the identification of carriers and amniocentesis. This is usually reserved for parents with a child who has this syndrome.

A team approach involving pediatricians, neurologists, psychiatrists, social services, and therapists is essential. Strong support systems and routine psychiatric care can prevent misdiagnosis of severe mental retardation in a child with mild retardation or low-normal intelligence who feels overwhelmed but is unable to voice his or her concerns.

Early initiation of allopurinol therapy can normalize uric acid levels and prevent renal failure. However, the neurologic and psychiatric manifestations of Lesch-Nyhan syndrome cannot be prevented or even slowed. With the use of restraints and dental extraction to prevent self-mutilation, children with this syndrome may live well into their forties or fifties.