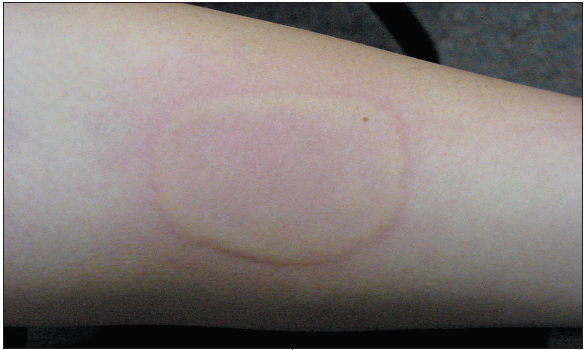 For 6 months, a 19-year-old woman had had sensitivity to cold. When outside in cold weather, she noticed swelling, erythema, and pruritus of her uncovered hands. After she held a cold drink on her arm for about 5 minutes, urticarial lesions developed on the skin in contact with the drink. The symptoms resolved about 20 minutes after the cold source was removed. She denied angioedema, respiratory symptoms, light-headedness, and tachycardia.

An ice cube wrapped in plastic was applied to the patient’s forearm for 4 minutes. About 1 to 2 minutes after the ice cube was removed, the area exposed to the cold began to itch. Shortly afterward, this urticarial lesion developed in the shape of the ice cube, starting with its outer rim and progressing inward. She had no other symptoms during the test.

Rajiv Arora, MD, of San Antonio, Tex, writes that this finding is consistent with cold urticaria. Because the patient had no clinical or laboratory findings that suggested an associated disease (ie, cryoglobulinemia, cold hemagglutinin disease, cryofibrinogenemia, or paroxysmal cold hemoglobinuria), idiopathic cold urticaria was diagnosed. Although this is probably a histaminedriven process, the exact mechanism remains unknown. Diagnosis is based on a typical history and a positive ice cube test. When performing this test, wrap the ice cube in plastic so that water does not come in contact with the skin; this precludes any suspicion of aquagenic urticaria. Apply the ice cube to the forearm for 4 minutes, and observe the area for 10 minutes after the ice cube is removed. In affected patients, localized pruritus and urticaria usually develop during rewarming of the skin.

Antihistamines are the cornerstone of therapy for idiopathic cold urticaria. The classic drug of choice, cyproheptadine, is particularly effective; however, its adverse effects and dosing may make the second-generation antihistamines more appealing. The prognosis varies and is unpredictable. Sensitivity to cold may persist for months to many years.

This patient was treated with cetirizine. Because total-body cold exposure (eg, swimming in cold water) may lead to full anaphylaxis and even death, she was also counseled on cold avoidance and advised to obtain a MedicAlert bracelet. In addition, autoinjectable epinephrine was prescribed.