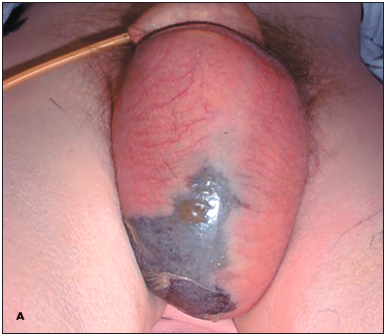 A 70-year-old man was hospitalized after he fell and was unable to rise because of weakness. He denied dyspnea, chest pain, palpitations, vertigo, light-headedness, preceding aura, hematemesis, hematochezia, and melena. For the past year, the patient had had intermittent low-volume, watery diarrhea that had recently begun to occur daily; he had also lost 13.5 kg (30 lb) during the past 6 months. Shortly after he was admitted, scrotal edema, discoloration, bullae, and erythema of the upper left thigh developed (A). 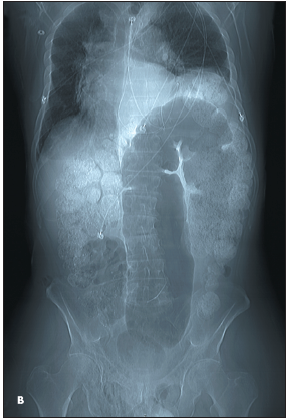 This constellation of findings was highly suggestive of Fournier gangrene secondary to a perforated obstructing colonic malignancy. An emergent surgical consultation led to local debridement and resection of a perforated rectal carcinoma and synchronous sigmoid carcinoma. Pathologic examination of surgical specimens confirmed the diagnosis.

CPT Edward Bergen, MC, USA; CPT Jonathan Brewer, USAF, MC; and LTC Ethan Emmons, MC, USA, of Fort Sam Houston, Tex, point out that a perforated colorectal carcinoma is an unusual cause of Fournier gangrene. Fournier disease—a rare form of type I necrotizing fasciitis that involves the  male genitalia and perineum—usually results from urogenital surgery, trauma, or perirectal abscess.1  Intraabdominal causes are rare and are generally secondary to rupture of the appendix, rupture of the diverticula, or incarcerated hernia.2  The presentation of anorectal causes is usually less typical, which contributes to a delay in diagnosis and a worse prognosis.3 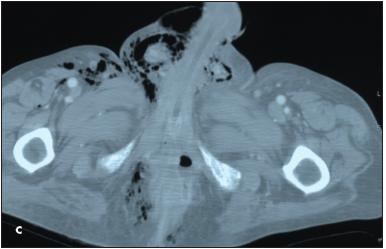 Given the mortality rate of 20% to 40%, early diagnosis and emergent surgical intervention are paramount to survival.4  When scrotal edema develops in patients with GI bleeding, a high index of suspicion for bowel perforation can ensure a rapid diagnosis and appropriate management.

This patient received broad-spectrum antibiotic therapy. After multiple debridements and continued supportive care, the patient was discharged. At follow-up, results of positron emission tomography revealed a residual rectal tumor but no evidence of metastasis. Adjuvant radiation therapy is planned.