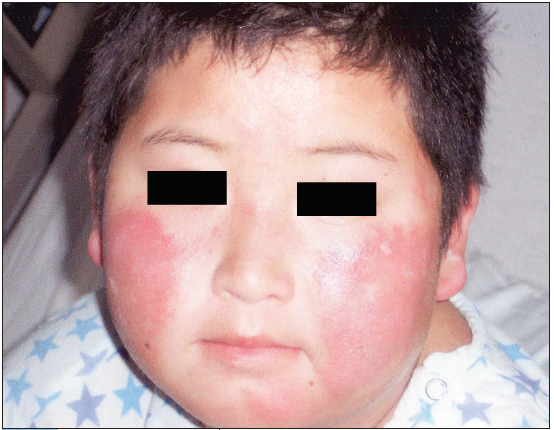 An 8-year-old boy whose family had recently immigrated from Southeast Asia was brought to the emergency department (ED) with a well-demarcated, pruritic rash that had appeared on his face 6 weeks earlier. At that time, the patient's primary care physician had diagnosed Fifth disease. As the rash spread to the child's arms and back, atopic dermatitis was considered. The week before presentation in the ED, the rash had become more inflamed and pruritic and was accompanied by fevers.

In the ED, the patient was in no acute distress. He was 50 kg (111 lb);temperature, 37.1°C (98.7°F); heart rate, 108 beats per minute; respiration rate, 22 breaths per minute; and blood pressure, 116/84 mm Hg. The rash was composed of confluent violaceous patches and minimally elevated plaques that blanched to pressure. Multiple excoriations were noted. There was no obvious eyelid edema or heliotropic rash.

Nathan Hitzeman, MD, and Mimi Reiss, MD, of Sacramento, Calif, considered a diagnosis of atypical eczema with superinfection. The patient was hospitalized and treated with oral antibiotics, corticosteroids, and antihistamines.

The consulting dermatologist elicited a history of at least 1 episode, about 2 weeks earlier, in which the patient had difficulty in standing up from a sitting position. Histologic analysis of a skin biopsy specimen showed increased mucin in the upper reticular dermis--a nonspecific characteristic of connective tissue disorders. 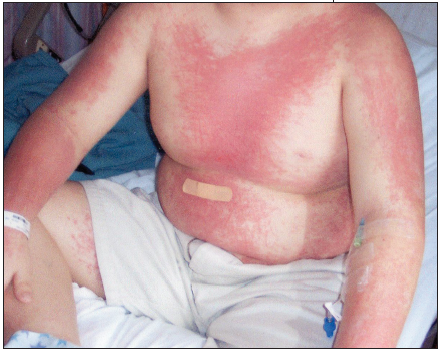 Juvenile dermatomyositis is uncommon. The peak incidence is between 5 and 14 years of age.2 The cause is unclear, but immunologic factors are suspected. Classic features of dermatomyositis (not seen in this patient) include:

•Gottron sign: symmetric erythematous or violaceous macules or plaques in the same distribution as the Gottron papules.

•Heliotropic rash: a reddish purple rash on the upper eyelids with periorbital swelling. 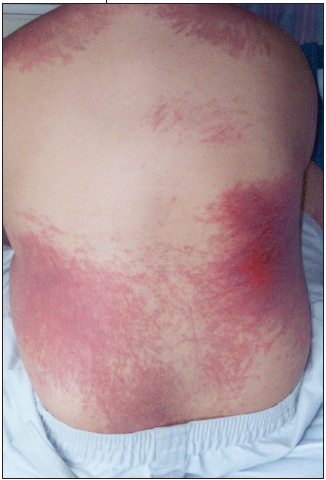 The "shawl" sign--which consists of poikilodermatous macules that appear in a "V" distribution over the shoulders, chest, and back--is a less common presentation of dermatomyositis and was seen in this patient.2,3

First-line treatment for dermatomyositis is a high-dose corticosteroid, such as prednisone( (0.5 to 1.5 mg/kg).2,3 The dosage is slowly tapered after symptoms resolve and enzyme levels become normal. Methotrexate( and cyclosporine are sometimes used in patients who do not respond to corticosteroid therapy.