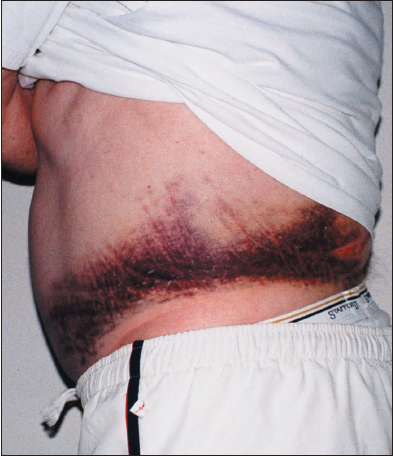 A 72-year-old man slipped and fell backward in the bathroom, hitting his head on the toilet seat; he suffered only minimal discomfort. The following day, he presented with mild back pain and extensive bruising.

Impressive ecchymoses extended from his left flank to his right flank, across the midline, where a tender mass was palpated. Swelling was visible from a distance at the L4 level; the 17 10-cm lesion was raised approximately 1.5 cm, with overlying black-blue ecchymoses. The patient was taking self-prescribed baby aspirin, 81 mg/d; vitamins C, E, and B12; and Ginkgo biloba, 400 mg/d.

Could the fall alone have caused this extensive bruise—or is something else involved?

Anser on next page

Extensive ecchymoses following a fall: Because of the severity of the bruising, a noncontrast CT scan of the abdomen was obtained. The scan revealed a soft tissue mass (a hematoma) within the subcutaneous fat that extended to the adjacent muscle plane of the lower back; no intraabdominal or retroperitoneal bleeding was noted. The patient was advised to discontinue both the aspirin and the ginkgo.

Ginkgo, or Ginkgo biloba, is known by several names, including ginkgo leaf, maidenhair tree, kew tree, fossil tree, ginkyo, yinhsing, Japanese silver apricot, Ginkgo folium, Salisburia adiantifolia, and bai guo ye. Ginkgo has long been used in folk and Chinese medicines for its purported psychotropic and neurotropic properties and as a sexual performance enhancer, premature aging preventive, antacid, antihypertensive and heart disease treatment, and liver function aid.1,2  Ginkgolide B, one of a group of terpenes contained in Ginkgo biloba and a known inhibitor of platelet-activating factor, is thought to cause some of the beneficial, as well as some of the detrimental, effects of ginkgo.3

After 3 weeks, this patient’s ecchymoses had resolved, but a 20 x 18-cm hematoma was still palpable. In time, the hematoma cleared without treatment; the patient has had no further episodes of bleeding.

Hyperpigmented Areas of the Palms on next page

Hyperpigmented Areas of the Palms

During a routine annual physical examination, a prominent area of hyperpigmentation was noted on the palms of a 7-year-old African American boy.

What steps will you take to determine the cause of this discoloration? 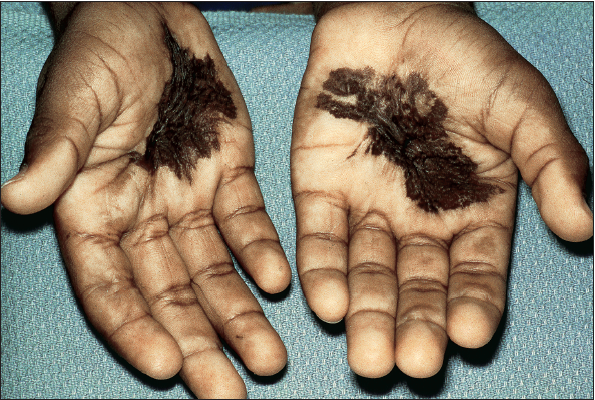 Hyperpigmented areas of the palms: Before undertaking an extensive workup to discover perhaps an exotic cause of this puzzling condition, a more in-depth history taking was warranted. In response to questioning, the child’s mother reported that the patient had suffered third-degree burns on both palms at age 2 years; skin from the thigh, which is naturally darker in color, had been used for  grafts on the injured hands.

Unusual Pigmentation Pattern on next page

Asymptomatic, dark brown patches suddenly appeared on the leg of a 53-year-old man who was vacationing at a Caribbean resort. He had spent most of his time sunbathing on the beach. On returning to the United States, he immediately sought medical attention.

What is the likely cause of the hyperpigmentation? 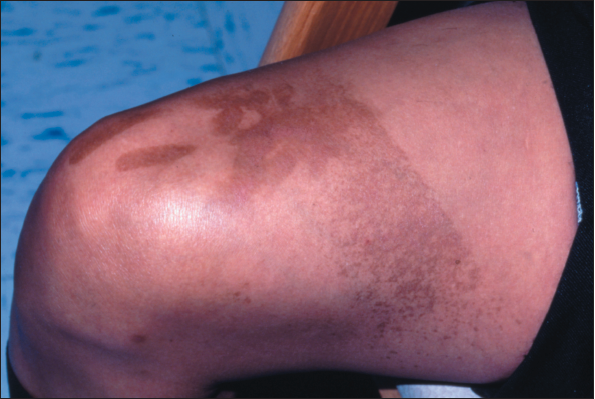 Unusual pigmentation pattern: Further questioning revealed that the patient had spilled lemon-flavored rum punch on his leg while he was sunbathing. The hyperpigmented path of the spilled drink can be traced down the patient’s leg below the hemline of the shorts.

This exchange supports the diagnosis of phytophotodermatitis, which results from exposure to sunlight after contact with photosensitizing plant psoralens (furocoumarins). Lemon, lime, parsley, celery, parsnip, and fig are among the fruits and vegetables that cause this reaction.

The hyperpigmentation usually fades over time; topical azelaic acid or hydroquinone may be tried.