An HIV-positive 38-year-old man with a history of injection drug use presented to the emergency department with abdominal and back pain that worsened with motion. He denied fever and vomiting. During the past 2 months, the patient had been treated for a urinary tract infection (UTI) 4 times and evaluated for a renal calculus, which had been ruled out. He was currently receiving ciprofloxacin, ibuprofen, and HAART. 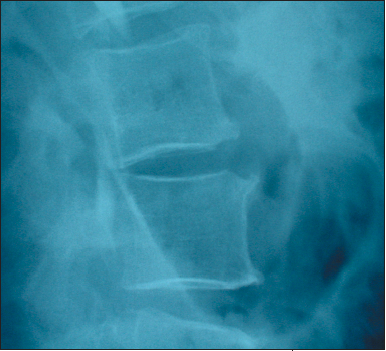 The patient was afebrile. Examination revealed tenderness in the left mid abdomen, left lower quadrant, and left costovertebral angle. Neurologic findings were normal. A lateral lumbar spine radiograph showed an abnormality at the L2-3 level, which suggested diskitis. A CT scan of the abdomen confirmed the diagnosis. There was no evidence of cord compression.

In this patient, the abnormal urinalysis results led other physicians to suspect a UTI. However, men with recurrent or refractory pyelonephritis require further evaluation. In addition to UTIs, osteomyelitis may mimic other disease processes and conditions, such as appendicitis, which can cause reactive pyuria.

This patient initially received piperacillin/tazobactam and vancomycin because of his previous injection drug use and possible infection with methicillin-resistant Staphylococcus aureus. Based on the blood culture results, the regimen was switched to ceftazidime and tobramycin. After 5 weeks, he was discharged with oral levofloxacin, 750 mg qd for 4 weeks. Five months later, the condition recurred.

Progressive cough and dyspnea of 2 months’ duration prompted a 23-year-old man to seek medical attention for the fourth time. On previous emergency department visits, he had received antibiotics, which failed to relieve his symptoms. The patient reported fatigue, cough that produced whitish sputum, dyspnea on exertion and at rest, orthopnea, palpitations, and night sweats. He also had a purple patch on the tip of his nose, which had appeared about the same time as the cough. The patch had enlarged, and maculopapular satellite lesions had developed on his chin and cheeks (A). 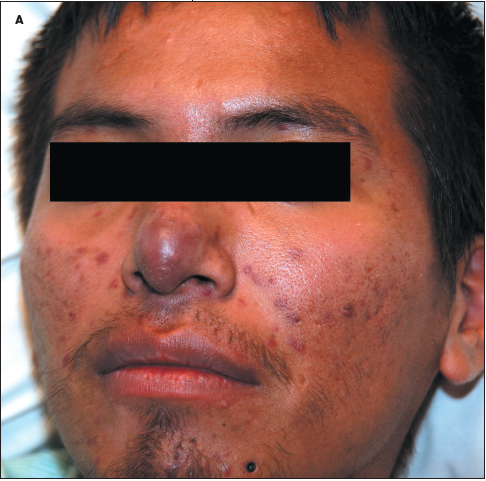 The patient—a Mexican immigrant and machine factory worker—had no significant medical conditions or allergies. He denied recent travel, weight change, and use of alcohol or illicit drugs. He smoked about a pack of cigarettes per week and admitted to having unprotected sex with many women whose history he did not know. Temperature was 38.2°C (100.7°F); heart rate, 125 beats per minute; blood pressure, 125/61 mm Hg; respiration rate, 48 breaths per minute; and oxygen saturation, 75% on room air (99% on nonrebreather mask). The patient had thrush. Further examination of the oral cavity revealed an infection of the upper right second molar. 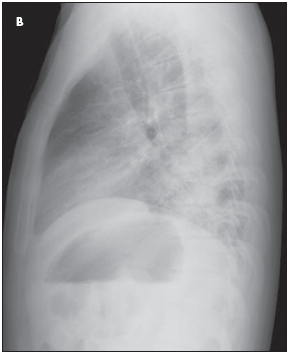 Coarse crackles were heard throughout the upper and lower lung fields bilaterally, and breath sounds were decreased. The abdomen was soft and nontender without hepatosplenomegaly. Compared with previous imaging studies, lateral (B) and posteroanterior (C) chest radiographs showed worsening pulmonary edema and bibasilar pulmonary opacities with air bronchograms. A CT scan confirmed the presence of severe bilateral pneumonia.

A punch biopsy of a satellite lesion revealed an atypical vascular proliferation consistent with Kaposi sarcoma (KS). Results of immunostaining for human herpesvirus 8 (HHV-8) were positive.

KS is associated with HHV-8 infection and is the most common tumor in HIV-infected persons. This patient had epidemic, or AIDS-related, KS, which is considered an AIDS-defining illness by the CDC. The initial presentation can vary from an incidental skin lesion to extensive GI and respiratory metastases. Skin lesions appear most often on the lower extremities, face (especially the nose), oral mucosa, and genitalia. The lesions range from a few millimeters to several centimeters; they may have an elliptical shape and may be symmetrically or haphazardly distributed. The degree of vascularity determines whether their color is pink, red, purple, or brown. They are often papular and can be accompanied by significant lymphedema. Because the lesions are usually asymptomatic, many patients ignore them. 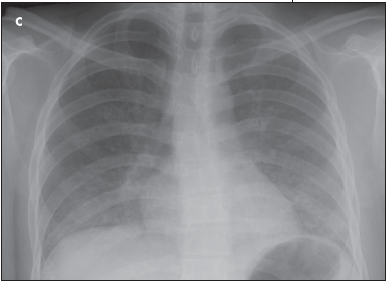 The use of HAART is associated with a reduction in the size of existing lesions. Intralesional chemotherapy, radiation therapy, laser therapy, and cryotherapy may also reduce the size and spread of lesions. Systemic chemotherapy is reserved for patients with widespread skin involvement (more than 25 lesions) or cutaneous lesions that are unresponsive to local treatment, and for symptomatic patients with visceral organ involvement.

This patient was given oxygen therapy, high-dose intravenous trimethoprim-sulfamethoxazole, and systemic corticosteroids for pneumonia. Within 2 weeks, oxygen therapy was discontinued. An HIV test showed an absolute CD4+  cell count of 3/μL. The patient was informed of his HIV status, its implications, and the need for vigilant adherence to HAART. His illness will be monitored on an outpatient basis.

A 36-year-old woman with a history of HIV disease presented for evaluation of dyspnea of 1 week’s duration. She had been taking trimethoprim-sulfamethoxazole for Pneumocystis carinii pneumonia prophylaxis. Because of a presumed skin reaction to this medication, dapsone was recently substituted.

Initial arterial blood gas analysis on room air demonstrated a pH of 7.46; PO2, 119 mm Hg; PCO2, 23 mm Hg; carbon dioxide level, 16.8 mmol/L; and oxygen saturation, 94%. The patient’s labored breathing subsequently worsened. A pulse oximetry reading was 87%; it did not increase after the patient was given oxygen.

A second arterial blood gas analysis revealed a methemoglobin level of 28.8%, which explained the original findings and the lack of response to oxygen therapy. 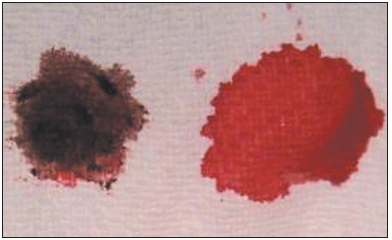 The “chocolate brown” discoloration of the blood may occur at methemoglobin levels of about 20%. Dapsone is metabolized to an oxidizing hydroxylamine compound by cytochrome P-450 3A4. If diagnosed early, dapsone-induced methemoglobinemia can be treated with a potent inhibitor of the 3A4 isoenzyme, such as cimetidine, which can inhibit the formation of the hydroxylamine metabolite.

This patient was treated with both cimetidine and methylene blue. The latter is an electron acceptor that, along with nicotinamide adenine dinucleotide phosphate methemoglobin reductase, reduces methemoglobin to hemoglobin. Within 30 minutes, the patient’s oxygen saturation increased to 98% and her methemoglobin level fell to 7.4%.