Immediately after an attack, the girl would develop lower-extremity twitching and numbness, progressing to weakness and an inability to walk. She was admitted initially for workup of possible conversion disorder.

The day after admission, the patient was noted to have hypertension, with systolic blood pressure surpassing 150 mm Hg. At this time, further workup was then initiated.

The girl’s family history was significant in that her mother had had an extrarenal tumor surgically resected at the age of 12 years. At the time, the mother had presented with diaphoresis, anxiety, palpitations, and hypertension. Medical documentation confirmed that the girl’s mother had received a diagnosis of pheochromocytoma.

The girl’s laboratory test results showed that plasma and urine normetanephrine levels and the serum chromogranin A level were elevated.

Renal ultrasonography showed left renal mass suggestive of a neuroendocrine tumor. This finding was confirmed with computed tomography (CT) of the abdomen, which showed a 3 × 3-cm mass in the left renal hilum (A). By comparison, historical abdominal CT images of the patient’s mother, taken at the time of her diagnosis, showed a 6 × 4-cm mass in the right renal hilum (B). 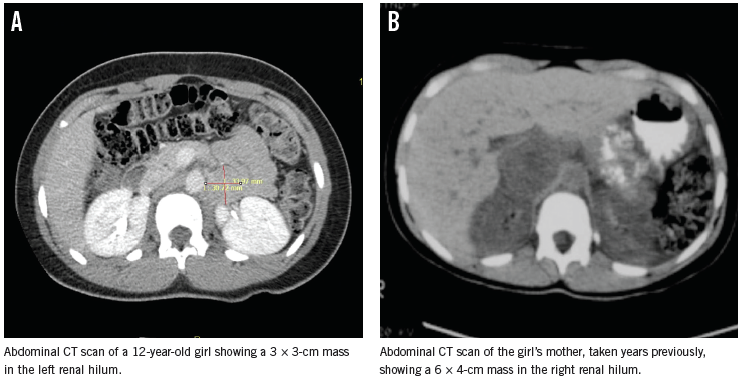 Chest CT, echocardiography, magnetic resonance imaging of the brain and spine, and an octreotide scan were done to assess the patient for metastases; the results of all tests were negative. Succinate dehydrogenase subunit B gene analysis results were positive for mutation of the SDHB gene, which is associated with the development of pheochromocytomas and paragangliomas.

The patient was started on doxazosin and nifedipine for α1-adrenergic blockade, followed by labetalol to control tachycardia. After adequate blood pressure and heart rate control was achieved, the tumor was surgically resected without complications. Surgical pathology results confirmed the diagnosis of pheochromocytoma.

Postoperatively, the girl remained normotensive and did not require antihypertensive medication. Several months after the girl’s initial presentation, her mother was found to have a paraganglioma in her neck, which subsequently was resected successfully. The patient and her mother both now remain symptom free. n