A 19-year-old white male college student with no significant past medical history presented to the hospital, accompanied by his parents, with high fever, night sweats, neck and left jaw pain and swelling, odynophagia, dysphagia, and generalized malaise. Symptoms started 2 weeks prior with sore throat and fatigue. He then began to experience severe chills, spiking fever to 102°F to 103°F, left jaw swelling, pain, and difficulty swallowing.

The patient was first evaluated at his school clinic where a presumptive diagnosis of infectious mononucleosis (IM) was made and he was treated with oral steroids and NSAIDs. The patient was not improving and developed increasing irritability, lethargy, anorexia, and vomiting, at which point he was rushed to nearest emergency department (ED) for another evaluation.

After initial workup and physical examination, the ED discharged him with same diagnosis of IM. The following day, patient had received a call from the ED attending stating that the blood culture had grown gram-negative bacteria and he was advised to go to the nearest hospital for further treatment.

At the time of admission the patient denied cough, chest pain, shortness of breath, history of insect bites to the neck, any recent travel, sick contacts, or recent surgeries. Past surgical history was significant for bilateral ear tube placement in childhood. The patient was sexually active with 1 partner, reported occasional alcohol use, but denied any intravenous drug or tobacco use. No known drug allergies. Up to date with all immunizations.

Initial assessment revealed a temperature of 101.1ºF, blood pressure of 117/64 mm Hg, a heart rate of 113 beats per minute, respiratory rate of 20 breaths per minute, and oxygen saturation 96% on room air. The patient was alert and oriented with no signs of respiratory distress.

A skin exam was noticeable for generalized flushing around his face and chest with normal turgor. On ear, nose, and throat examination, there was erythema and swelling of the posterior pharyngeal mucosa and tonsils with no visible exudates as well as swelling and erythema of the left mandibular side of the neck, associated with severe tenderness on palpation.

The cardiac exam revealed normal S1 and S2, a tachycardia, and a regular rhythm with no murmurs, gallops, or thrills. Abdominal examination was significant for hepatosplenomegaly. There was generalized tenderness to palpation but no peritoneal signs or masses were appreciated. Pulmonary, neurologic, and musculoskeletal examination were normal.

A chest x-ray on admission failed to demonstrate any infiltrates (Figure 1). An electrocardiogram demonstrated sinus tachycardia. 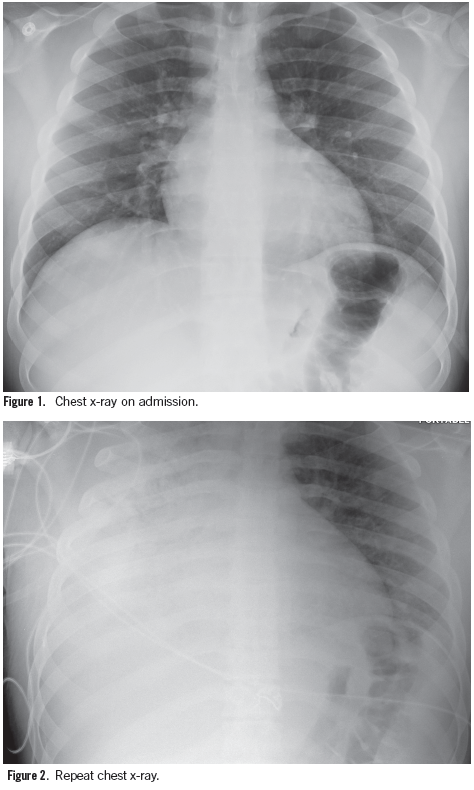 Laboratory tests revealed an elevated lactate of 3.8 mmol/L, worsening of leukocytosis with WBC count now 20.3 x 109/L, and thrombocytopenia with platelets being 130 x 109/L. The patient was transferred to the ICU and placed on bilevel positive airway pressure therapy (BiPAP), azetreonam, metronidazole, and heparin for presumptive diagnosis of scattered septic emboli. He failed to tolerate BiPAP trial throughout the night and was intubated the following morning.

At this point, the decision was made to transfer the patient to a tertiary hospital for a CT evaluation. Anticoagulation therapy was discontinued due to no evidence of thrombophlebitis or pulmonary embolism on CT scan of the head, neck, and chest. The scan did reveal asymmetric enlargement of the left oropharyngeal wall, multifocal infiltrative changes within the subcutaneous tissues, the masseter muscle, the left platysma muscle and submandibular space, bilobular multifocal pulmonary consolidations consistent with septic emboli, and splenic infarct. HIV, hepatitis B, hepatitis C, Epstein-Barr virus, mumps, and Legionella antigen tests all came back negative.

The patient improved clinically and was subsequently extubated on the fifth day of admission. A repeated CT of the neck, chest, and abdomen showed improving pulmonary consolidations and stable splenic infarct (Figure 2). Blood cultures were positive for beta lactamase positive, anaerobic, and gram-negative Fusobacterium necrophorum sensitive to metronidazole. The patient was continued on intravenous metronidazole for 3 days until discharge, upon which an additional 40-day course of oral metronidazole was prescribed.

Although the initial imaging did not show thrombophlebitis of the internal jugular vein, the patient clinically presented with many of the common findings associated with Lemierre’s syndrome. It can also be hypothesized that the thrombus completely embolized by the time the initial imaging was performed or the symptoms were secondary to undetectable microthrombi.

As well-known as necrobacillosis or anaerobic postanginal sepsis, Lemierre’s syndrome is a very rare but severe complication of oropharyngeal infection, which most commonly affects young people with median age of 22 years.1 It has an incidence rate at 3.6 cases per million.2,3 Late diagnoses with delayed initiation of antibiotic treatment can have detrimental consequences and fatal outcomes. In pre-antibiotic era, postanginal sepsis was best described by Andre Lemierre as a case series of 20 patients, of whom 18 died. After discovering of antibiotics, incidence of this fatal disease decreased significantly and in 1980, it was referred to as the forgotten disease.2-4

The pathogenesis of thrombophlebitis is still unknown, but there are several hypotheses. The organism might spread through the tonsillar vein or peritonsillar lymphatic system causing inflammation and thrombosis. Another theory is that changes in the pharyngeal mucosa from bacterial or viral infection help F necrophorum to penetrate mucosal surfaces.2,3

In animal models, it has been shown that virulent strains of organisms can form microcirculatory thrombi.6 There are also several publications that found a connection between NSAID and corticosteroids use in the absence of antibiotic coverage as a promoting factor for pathogen spread.7 Virulent strains of F necrophorum are able to produce leucotoxin, which causes platelet activation and thrombus formation.2

Initial clinical findings typically include a 1-week history of sore throat, followed by high fever, chills, abdominal pain, nausea, vomiting, and dysphasia. When infection spreads to the parapharyngeal space, it can cause thrombophlebitis, unilateral pain, and swelling of the neck that can extend from the angle of the jaw to the sternocleidomastoid muscle.5,7 Late sequelae of Lemierre’s syndrome include metastatic septic emboli to distant sites, most commonly to the lungs (79.8%) and joints (16.5%).5 Numerous other sites for emboli have been described, including bones, liver, meninges, kidneys, skin, and soft tissues.

Postanginal sepsis is so uncommon in clinical practice that diagnosis may be delayed up to 5 days after admission. When lungs are involved, chest x-rays frequently reveal bilateral nodular infiltrates, cavitary lesions, and pleural effusions.3 A contrast-enhanced CT of the neck is preferred to diagnose internal jugular vein thrombophlebitis, although an MRI or ultrasonography can also be used. Color doppler ultrasonography is a less expensive, less invasive, readily available test that lacks radiation exposure; however, it can miss fresh thrombus as well as thrombus located behind the mandible or clavicle.10,11 In 69.7% of cases, the first diagnostic clue of Lemierre’s syndrome is not clinical signs or symptoms, but positive anaerobic cultures for F necrophorum.5

The main treatment consists of prolonged antibiotic therapy with beta-lactamase resistant antibiotics with anaerobic coverage for 2 to 6 weeks.3 Whether or not to use anticoagulation is unclear, due to lack of clinical studies.8,9 Surgical drainage of formed abscesses play an important role in management, but more aggressive treatment—such as a ligation or resection of the internal jugular vein—is rarely done.10

In recent years, there has been increased incidence of the Lemierre’s syndrome, which can be traced to better blood culture techniques, decreased antibiotic prescription rates for nonstreptococcal pharyngitis, as well as a drop in tonsillectomy rates. Primary care physicians commonly see patients with complaints of sore throat, and it is easy to forget about uncommon severe complications, such as postanginal sepsis, that can lead to high morbidity and up to 8% mortality.12 Lemierre’s syndrome can be easily misdiagnosed, due to a very nonspecific initial clinical picture and fulminant course of disease. High clinical suspicion, early diagnosis, and proper antibiotic therapy is crucial for good outcomes of this life-threatening syndrome.

risk management
risk management
COVID-19 Roundup: Variant Component in Boosters, Damage to Cardiac Muscle, Hypertension Risk
In this COVID-19 roundup, coverage includes the addition of an Omicron variant component to future vaccine boosters, the relationship between a COVID-19 infection and damage to heart muscle, and how...
Depression Care360
Depression Care360
Unemployment, Housing Instability Linked With Worse Depression Treatment Outcomes
Unemployment, unstable housing status associated with worse prognosis outcomes for adults with depression.
pediatrics
pediatrics
Maternal Psychological Distress Associated With Atopic Dermatitis in Children
Researchers examined how mothers psychological distress during pregnancy impacted the risk of atopic dermatitis in children.
Supplements
Supplements
Vitamin B6 Supplementation May Reduce Anxiety, Depression
The researchers examined the behavioral effects of the specific B vitamin in individuals with anxiety and depression.
Glaucoma
Glaucoma
Advanced Vision Loss After Glaucoma Diagnosis More Likely Among Black Patients
Glaucoma is the leading cause of blindness in the United States. A team of researchers sought to identify the racial and ethnic differences in primary open-angle glaucoma and its effect on vision loss among...