Pharyngitis as the Presenting Symptom of Stevens-Johnson Syndrome 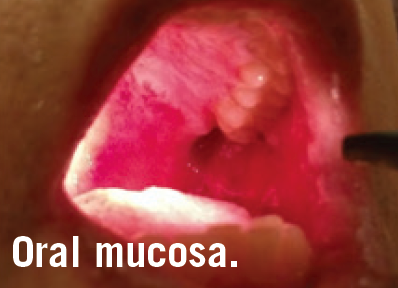 A 63-year-old male with recurrent nephrolithiasis and multiple medical problems was admitted for worsening pharyngitis refractory to outpatient management with supportive therapy. It had started 2 days prior to presentation. He denied rash, fever, congestion, cough, or sick contacts. About 2 weeks earlier, he had started prophylactic trimethoprim/sulfamethoxazole daily for ureteral stent placement.

On admission, the patient was afebrile but had a muffled voice and increased oral secretions. Fluctuating, erythematous macules on his lower extremities and subconjunctival hemorrhages developed while in the emergency room. An esophagogastroduodenoscopy (EGD) showed plaques consistent with esophageal candidiasis. IV fluconazole was initiated. Fungal cultures later proved negative. The skin findings spread and a biopsy from his chest was consistent with toxic epidermal necrolysis. The dysphagia continued and a nasogastric tube was placed for nutrition. The patient improved with speech and swallow rehabilitation, and tolerated a regular diet 3 weeks after presentation.

Discussion. Stevens-Johnson syndrome (SJS) is a rare, severe, immune-complex mediated hypersensitivity reaction, most commonly caused by medications or illness, that results in mucocutaneous lesions and epidermal sloughing in 10% or less of the body surface.1,2 Common prodromal symptoms include fever, malaise, headache, and arthralgias.

SJS often affects mucosal surfaces such as lips, oral mucosa, and conjunctiva.3 Pharyngitis is most commonly noted as a prodromal symptom for SJS. This may be the only reported case where pharyngitis was the only symptom before developing the more typical cutaneous involvement.

Literature. SJS has been incited by various infections and drugs. Wanat et al reported trimethoprim-sulfamethoxazole was most commonly implicated medication in SJS. Other drugs frequently cited include sulfonamide and cephalosporin antibiotics, anticonvulsants, and allopurinol.2 They are usually started days or weeks prior to symptoms, though cases attributed to chronic use have been reported.1 In such cases, multiple factors may have led to SJS; indeed a seasonal variation has been suggested.2 The timing and inciting drug in this case was typical.

Involvement of mucosal surfaces throughout the gastrointestinal tract is a rare manifestation of SJS. Jha and Goenka reported colonic involvement that presented as abdominal pain and hematochezia 2 weeks after skin findings, all following treatment with oral amoxicillin.4 Esophageal involvement has also been reported by Howell et al in the case of a 7-year-old male treated with oral ampicillin for otitis media who developed a typical prodrome, skin findings, and mucosal involvement of the conjunctiva, tongue, buccal mucosa, and posterior oropharynx. That case required intubation to maintain his respiratory status and subsequently, developed a severe esophageal stricture,5 which was not necessary in this case.

Outcome of the case. Our patient’s pharyngitis did not initially raise concern for SJS. The sloughing of his pharyngeal mucosa presented similarly to thrush, but failed to improve with treatment.

This case demonstrates the importance of a broad differential and knowledge of medication side effects. Early recognition of SJS with esophageal involvement can avoid unnecessary interventions and prevent poor patient outcomes due to airway compromise.■