A 62-year-old white male presented to a same-day clinic with a complaint of painless, nonpruritic maculopapular lesions on his back, chest, and shoulders. The lesions first appeared 2 weeks prior, and the patient had treated them unsuccessfully with bacitracin ointment. His past medical history was significant for Crohn’s disease, hyperlipidemia, a cerebrovascular accident (CVA), and recurrent methicillin-resistant Staphylococcus aureus (MRSA) furunculosis. Overall, 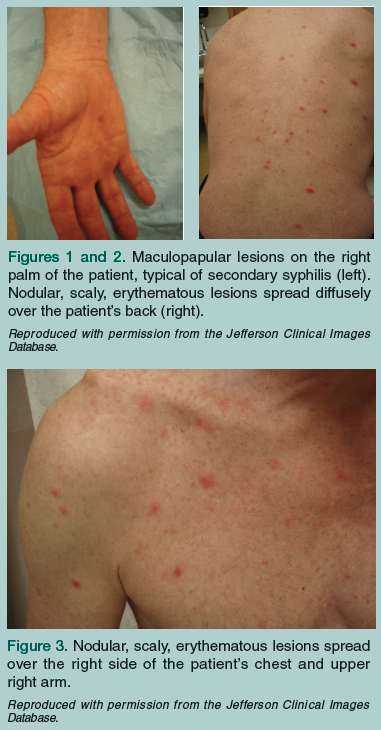 his medical problems were well controlled, and he was compliant with his care. His medications included simvastatin and aspirin, which he had been taking foryears. He denied insect exposure and use of new detergents, soaps, lotions, or other skin irritants. Of note, the patient was a wrestling coach and himself a competitive wrestler.

Physical examination revealed a muscular, healthy-appearing white male. He had diffuse, erythematous, scaling papular and nodular lesions spread over his back and chest. A wound culture was sent to the lab and came back with light growth of S. aureus, and he was started on clindamycin for presumed MRSA folliculitis.

The patient returned for follow-up 10 days later. The lesions had become more diffuse, spreading to his palms, and still nonpruritic and painless (Figures 1, 2, and 3). Upon further questioning it was discovered that the patient had had syphilis in 1982 and had been treated successfully. He had additional post-exposure negative rapid plasma reagin (RPR) tests in 2001 and 2002. He denied any genital ulcer disease. He was sexually active with a male partner, and he had never had a human immunodeficiency virus (HIV) test.

Due to the patient actively wrestling and his history of MRSA skin infection, the initial differential diagnosis of the lesions included folliculitis, scabies, tinea corporis, and contact dermatitis. Pityriasis rosea, the rash of primary HIV, cutaneous lymphoma, and an unusual presentation of secondary syphilis were also considered (Table).

A folliculitic infection should have responded to clindamycin, even if caused by MRSA, and would not have spread to the palms. Scabies more characteristically would be found in the interdigital webs and would be intensely pruritic. Tinea corporis lesions are sharply demarcated plaques with overlying scale. They also do not characteristically occur on the palms. Contact dermatitis is an inflammatory reaction secondary to allergen exposure and is usually pruritic or tender. This patient denied any known allergen exposures. Pityriasis rosea usually begins with a “herald patch,” then the fine-scaled papules erupt in a characteristic “Christmas tree” pattern. The rash of pityriasis is often pruritic and rarely involves the palms. The rash of acute HIV could not be ruled out. It can present in many ways: diffuse morbilliform rashes with macules and papules, ulcerated lesions, and vesicular and pustular exanthems have been reported. Cutaneous lymphoma presents as randomly distributed, sharply demarcated erythematous plaques. The lesions can be scaling or nonscaling and rarely occur on the palms. 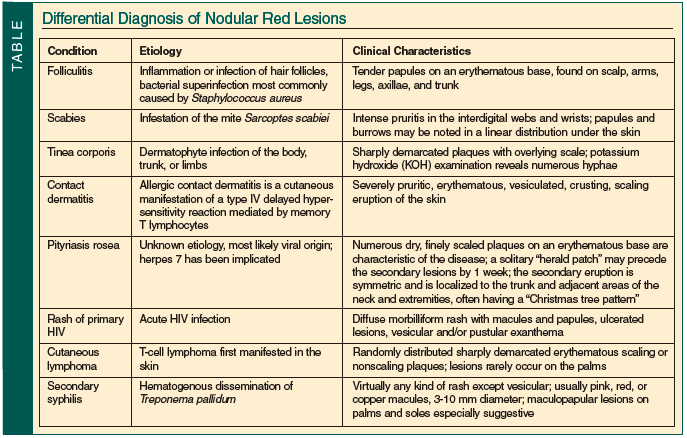 Currently, screening for syphilis has an “A” recommendation from the U.S. Preventive Services Task Force (USPSTF) for pregnant women and high-risk groups, which include men who have sex with men (MSM).1 This recommendation makes no distinction for age, underscoring the importance of assessing risk factors in all patients.

Typically, syphilis first presents as a chancre, a painless ulcer that forms about 21 days after the site’s exposure to the spirochete Treponema pallidum. This primary lesion, usually in the genital area, frequently goes unnoticed and untreated, as in the case of the case patient. In the pre-antibiotic era, studies found that 50-75% of exposed sex partners of persons with primary or secondary syphilis were subsequently infected.2

Secondary syphilis usually develops 4-10 weeks after the appearance of the chancre. This second stage of the disease is known for its protean manifestations. Most commonly, a painless, nonpruritic, macular rash develops on the trunk and extremities. If untreated, the rash can progress and become scaly and copper-colored, maculopapular or papulosquamous, and cover the palms and soles. The rash can be pustular, annular, or follicular, but almost never vesicular.3 The rash is the presenting complaint in 70% of patients.2

This increase in syphilis cases, particularly in the 55-and-older age group, emphasizes the importance of taking a sexual history in all patients, including those age 55 years and older. Numerous studies have demonstrated that older Americans remain sexually active.8 As a MSM with a history of syphilis infection, the case patient was at high risk for a recurrent infection and for HIV.9

Syphilis frequently coexists with HIV infection. Active syphilis infection with genital lesions is a risk factor for both transmitting and acquiring HIV.6 In general, the clinical and laboratory presentations of syphilis in HIV-infected persons are similar to those who are not infected. However, chancres and ulcerating lesions seem to be more common in HIV-infected individuals.3 In addition, there are reports of syphilis having a more rapid progression to the tertiary stage with HIV co-infection.10

In an HIV-positive patient with a coexisting secondary syphilis infection, clinical and serological follow-up is required at 3, 6, 9, 12, and 24 months. First-line treatment is benzathine penicillin G. Symptoms should resolve, and nontreponemal tests should decline fourfold by 6 months; if not, it is considered treatment failure, and the patient requires a lumbar puncture.2

The HIV population is aging due to both improved pharmacologic treatment and an increased number of new cases. In HIV, the Centers for Disease Control and Prevention (CDC) denotes an “elderly patient” as over age 50, which is younger than the designation of elderly in other diseases.12 In 2005, 24% of those living with HIV were over age 50 years, increased from 17% in 2001.12-14 The increasing prevalence of HIV in this age group is due partly to unsafe sexual practices and lack of patient knowledge about risk factors.15 MSM have the greatest risk for new HIV infection in the elderly, but heterosexual transmission, especially in women, is on the rise.

Approximately 25% of those who are newly diagnosed and over age 50 have no reported risk factors, further complicating screening protocols.16 Currently, there are no HIV recommendations specifically targeting the over-50 age group. The USPSTF gives an “A” recommendation for HIV screening in pregnant women and in high-risk patients, with no distinction for age. The USPSTF currently gives a “C” recommendation (neither for nor against) for routinely screening patients not considered to be at increased risk for HIV.17 However, in 2006 the CDC recommended HIV screening annually in high-risk patients, regardless of age, and as part of routine medical care for patients age 13-64 years.18 Also, in 2009 the American College of Physicians (ACP) released guidelines stating that physicians should adopt routine screening for HIV and encourage patients to be tested, regardless of age.19

There are key clinical differences in the diagnosis, presentation, and prognosis of HIV in patients in the over-50 age group. The diagnosis is often delayed due to low clinical suspicion, resulting in an increase in disease transmission and opportunistic infections. HIV-associated dementia in the elderly is a common presenting symptom and is three times as likely to occur in older patients with HIV, independent of CD4 counts.20,21 The dementia is subcortical and results in memory and psychomotor impairment, depressive symptoms, and movement disorders.22,23 It is often mistaken for Alzheimer’s disease, but HIV-associated dementia is much more progressive.16 Given the prevalence of HIV-associated dementia, as well as the knowledge that this diagnosis is often missed, it should be considered in the differential diagnosis in patients with and without known HIV diagnoses in mild cognitive impairment, Alzheimer’s disease, and atherosclerotic-associated dementia. HIV infection should also be in the differential diagnosis of neuropathy and Parkinson’s disease.12 Other than dementia, there are no major differences in AIDS-defining illnesses in the elderly, though they are more commonly misdiagnosed due to confusion with comorbidities.16 The clinical outcomes for elderly persons who are newly diagnosed tend to be worse than for younger patients. Older persons are more likely to present with CD4 counts less than 200 and are more likely to die within 1 month of diagnosis. They also have a slower immunologic response of CD4+ lymphocytes when taking highly active antiretroviral therapy (HAART).24,25

There are scant educational materials targeting older persons about risks for HIV disease. For this reason, it is essential that clinicians discuss sexual health and safe sex practices with all their patients, including those over age 50.12

At the patient’s follow-up visit, a punch biopsy of the lesion was performed, and an RPR was sent. The patient initially refused HIV testing but eventually consented after 3 months. The RPR was reactive with a titer of 1:4096, and a follow-up treponemal-specific test was reactive (FTA-ABS). The punch biopsy showed a nodular lymphocytic infiltrate thought to represent a rare pseudolymphoma presentation of syphilis, but a nodular tumor stage of mycosis fungoides could not be ruled out. Warthin-Starry stain failed to show any treponemal organisms. The HIV test came back positive. His HIV viral load was 202,000, and his CD4 count was 211.

The patient was treated with benzathine penicillin G 2.4 million units IM x 1. He was scheduled for clinical and serological follow-up at 3, 6, 9, 12, and 24 months, with the expectation that his symptoms resolve and that his RPR would decline fourfold by 6 months. The patient’s symptoms resolved clinically, and his RPR decreased to 1:512 at the 3-month follow-up. He was referred to an HIV specialist and was started on HAART. One year later, his CD4 count was 528 and his viral load was undetectable. He remains active and symptom-free.

Older Americans continue to be sexually active throughout their lives. Clinicians should educate their patients about safe sex, inquire about their patients’ sexual practices, and assess their patients’ risk for STDs and HIV. Rates of STDs and HIV are increasing in the 50-and-over age group, in part because of lack of sexual risk screening and safe sex counseling by clinicians and unsafe sexual practices by patients. The case patient should have been considered high risk for STDs and HIV given his past history of syphilis and his status as an MSM, and therefore screened regularly. Risk assessment and counseling by his physician may have prevented his HIV infection. Because of his lack of HIV screening, his HIV diagnosis was likely delayed, putting him at risk for opportunistic infections and poor outcome. Finally, because HIV-associated dementia is often missed, it should considered in the differential diagnosis of a dementia work-up.