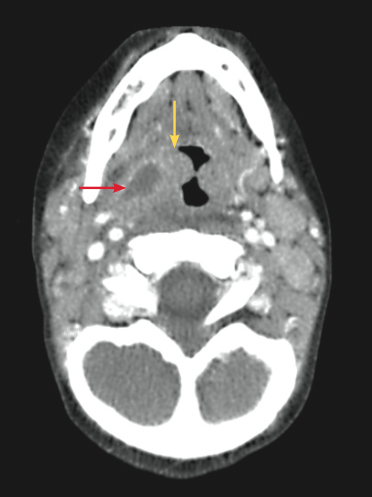 For the past 6 days, a 2-year-old boy had fever, sore throat, nonproductive cough, and decreased appetite. When his symptoms first appeared, he was brought to an outside emergency department, where his pediatrician examined him and diagnosed croup. The child’s symptoms persisted, and he was brought to a second hospital, where he was found to have a swelling on the right side of the neck and nonsuppurative conjunctivitis. He was also noted to have dry, cracked lips. Kawasaki disease was diagnosed, and the child was transferred to our facility for treatment.

Peritonsillar abscess is a complication of tonsillitis that typically occurs in older children and adolescents. The most common offending bacteria are group A ß-hemolytic Streptococcus. Presenting signs and symptoms include sore throat, fever, “hot potato” or muffled voice, difficulty in swallowing, and trismus. Physical examination may show asymmetry of the tonsils, shifted uvula away from the side with the abscess, and erythema and edema of the affected side of the neck.

Management generally consists of antibiotic therapy and, when the abscess is large, incision and drainage. Often, a tonsillectomy is performed as well.

This child responded well to treatment with intravenous clindamycin, and no surgical intervention was necessary. Follow-up with pediatric otolaryngology was arranged.