Dr Sonia Talwar is the chief of endocrinology at North Shore Hospital at Plainview New York. Her interest is management of osteoporosis, thyroid disorders and developing innovative tools for weight loss management.

Dr Sahni is a research associate with endocrinology and metabolism PC. His interest is developing computer-based learning tools for patient education.

Dr Verma is a research associate in endocrinology and metabolism PC. He is currently investigating the role of fatigue in patients with various metabolic problems.

A 66-year-old African American female with an established diagnosis of diffuse systemic scleroderma, hypothyroidism, interstitial lung disease, and pulmonary arterial hypertension presented to the outpatient clinic for hypothyroidism and hypercalcemia. She had been undergoing home oxygen therapy with supplemental oxygen (2 L/min via nasal cannula). The laboratory findings showed a positive antinuclear antibody with a speckled pattern (1:1280) and anti-Scl-70 antibody was also positive. Of note is that the patient’s calcium and phosphorus levels were in the normal range.

On physical examination, the patient exhibited the typical characteristics of systemic sclerosis, including sclerodactyly, narrow incisal opening, and tight, smooth facial skin with a “masklike” appearance. Upon further examination, the patient was noted to have a white, chalky-looking lesion of approximately 11 mm in diameter above the right eye due to loss of the overlying skin. In addition, on the contralateral side, there were 3 to 4 hardened nodules of varying size that were mobile on palpation (Figure). The patient denied any history of localized tenderness around the lesions, which had been progressing for the previous 16 to 18 months. 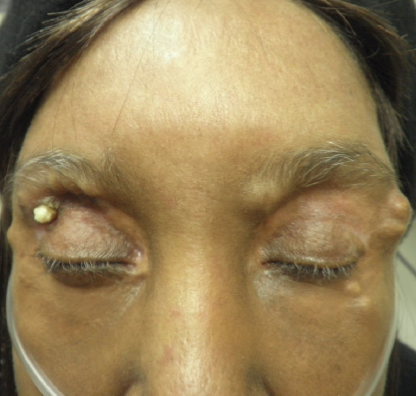 Metastatic calcifications of the soft tissue involve elevation of the serum calcium-phosphorus metabolism, especially when the product level is more than 70 mg/dL.8 Dystrophic calcifications occur despite normal calcium and phosphorus levels and have been attributed to increased pH in damaged or devitalized tissue.9 The calcinosis seen in scleroderma is of the dystrophic type and may occur in both the limited and systemic forms. The pathophysiology of this type of calcification is thought to occur with aberrant tissue architecture as a result of chronic tissue damage or collagen synthesis in the setting of normal serum and calcium and phosphate levels.9 The calcifications in systemic sclerosis primarily occur in the areas of sclerodactyly (distal phalanges), but they may also been seen in the hip joint, shoulders, lower limbs, elbows, and forearms.10 Although cases of mandibular resorption and calcinosis have been reported, cases of periorbital tumoral calcifications have not.

Several treatments have been tried, with mixed results but no standard therapy is currently available. Medical therapies for calcinosis cutis include warfarin, colchicine, bisphosphonates, minocycline, and corticosteroid injection; the results remain equivocal. Symptoms do show some resolution after surgical excision, although this is not the primary treatment of choice, based on the site involved, number of lesions, and comorbid conditions.11 Extracorporeal shock wave lithotripsy and laser treatment using carbon dioxide or erbium-doped yttrium are new tools with some success and have future potential.12,13

Although subcutaneous calcinosis is a relatively common finding in patients with scleroderma, it is rarely observed around the facial region. Calcifications are commonly found in areas of microtrauma or in movable joints. These lesions can be extremely painful and may ulcerate, eventually leading to infection. The exact mechanism and pathophysiology is still unknown. Calcinosis in connective tissue disease should be promptly diagnosed and symptomatic patients should be managed with available therapies. ■