Penetrating Trauma to the Soft Palate

A 9-year-old boy presented to the emergency department (ED) approximately 30 minutes after having sustained a penetrating trauma to the posterior soft palate.

While playing, he had fallen with a hollow rod in his mouth. The object was a dense, hollow, plastic tube measuring approximately 5.0 cm long and 0.4 cm in diameter.

After the injury, the hollow rod had fallen out unobserved, and the boy’s mother, noting significant blood in his mouth, brought him to the ED. Bleeding had continued for approximately 10 minutes while en route to the hospital and eventually had slowed by the time of presentation. 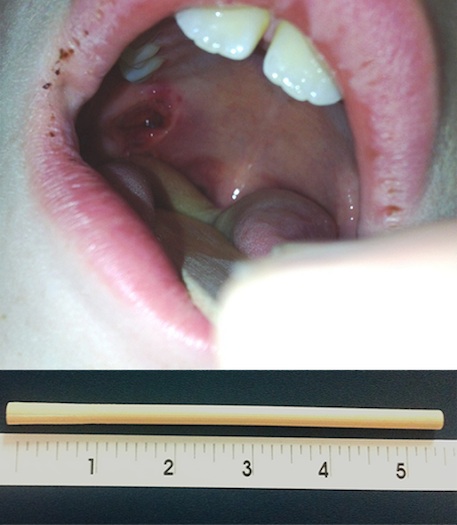 The patient was transferred to a tertiary ED, where physicians noted hemostasis at the site of the injury on the right lateral soft palate. The mother had recovered the rod and had brought with her; the ED physicians documented a line of blood approximately 2.5 cm up the rod and assessed that to be the approximate depth of penetration.

The boy refused oral intake in the ED and was admitted for further management. The ED physicians consulted the otolaryngologist on call and decided not to send the patient for imaging.

Once he was admitted, the patient was started on intravenous hydration and clindamycin, as recommended by otolaryngology.

The following morning, an oral and maxillofacial surgeon evaluated the patient and recommended a maxillofacial computed tomography (CT) scan to evaluate for potential subcutaneous and vascular injuries.

The results of the CT scan were significant only for the known posterior soft tissue laceration. No vascular injury had been sustained, despite the radiologist’s observation that the penetrating laceration had progressed to within 1 mm of the internal carotid artery. The patient was able to resume oral intake and later was discharged home with antibiotic prophylaxis.

Children are seen in EDs annually due to oropharyngeal trauma. Usually, such injuries are from objects such as toothbrushes or toys and occur in preschool children.8

Possible complications can include abscesses, neck or mediastinal emphysema, retained foreign bodies, or thrombosis or dissection of the internal carotid artery (ICA).1-5 The most severe of these are ICA injuries, which can lead to cerebral infarction, usually of the middle carotid artery. This outcome has been documented following even simple blunt injury without penetration.2

While thrombosis occurs in only less than 1% of patients with oropharyngeal injury,4 it is possible and should not be missed. At least 30 such cases have been reported in the English literature.6 Therefore, after initial stabilization, a CT angiogram (CTA) is recommended to assess for potential soft tissue and vascular injures.7 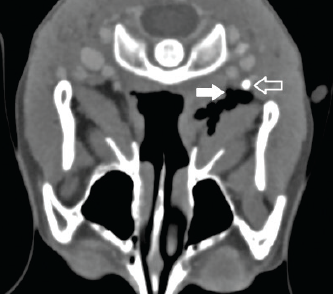 Other imaging options include angiography, magnetic resonance angiography, or oculoplethysmography, but these modalities are associated with higher costs and the need for the patient’s cooperation and/or sedation.7,8 One published review of trauma data found that CTA had a high sensitivity and high specificity for detecting ICA injury.8 Retrospective studies have shown that neurologic signs typically manifest within 48 hours after injury.3 After negative CTA and sufficient observation, patients who are clinically stable can be discharged home safely.