Patent Ductus Venosus A Rare Cause of Elevated Conjugated Bilirubin

Michael Rogers, DO, and Kyle Brady, DO

A 3-day old boy, born at 38 weeks of gestation and weighing 2.7 kg at birth, presented for his initial newborn visit after an uneventful stay in the nursery.

The neonate had appeared jaundiced in the nursery; results of a total bilirubin blood test and a conjugated bilirubin blood test at 27 hours of life were 6.2 mg/dL and 1.1 mg/dL, respectively. Coombs test results were normal. The child’s white blood cell count and hemoglobin levels were within normal ranges.

The newborn had been breastfed exclusively. 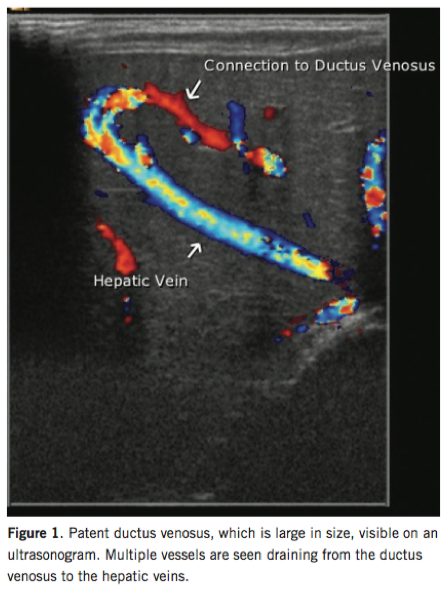 Total and conjugated bilirubin blood tests were again obtained at 5 days of life, with results of 8.2 mg/dL and 2.6 mg/dL, respectively. Additional serology laboratory tests were ordered, and an ultrasonogram of the liver was obtained (Figure 1). A large ductus venosus was seen, raising concern for impaired hepatic function.

Further evaluation of the patient’s hepatoportal circulation was performed with Doppler ultrasonography and revealed a nonocclusive thrombus in both the main portal vein and the left portal vein.

The neonate appeared well and was gaining weight, so his condition was followed closely with no interventions. The abnormal laboratory test results, including GGT, ALP, ammonia, total bilirubin, and conjugated bilirubin, had normalized at the 2-month visit. Bile acids—cholic, deoxycholic, and chenodeoxycholic—which had been elevated at 1 month of age, also had normalized by 7 months of age (Table 1).

At 11 months of age, the child was growing along the 50th percentile for both height and weight and showed no signs of developmental delay. Evaluation of the hepatoportal circulation with Doppler ultrasonogrpahy again was done and revealed no evidence of portal hypertension or hepatic veno-occlusive disease and revealed that the ductus venosus had closed.

Considering several case reports, as well as the physiology of blood flow,1 a cardiologist was consulted at 2 months of age to possibly coil the patent ductus venosus in order to hasten closure. The cardiologist ultimately agreed on conservative management, since the patient remained stable with good growth. The elevated percentage of direct and conjugated bilirubin  levels (greater than 10%) should alert the clinician to possible neonatal cholestasis.

The differential diagnosis for direct hyperbilirubinemia is considerable and can be categorized into structural, infectious, genetic, metabolic, alloimmune, and toxic causes (Table 2).2 Although the differential diagnosis is varied, the vast majority of cases in full-term infants is biliary atresia and idiopathic neonatal hepatitis, which account for up to 80% of cases.2 This is followed by α1-antitrypsin deficiency, which can account for up to 15% of cases.2 Jaundice in an infant older than 2 weeks should raise the suspicion of liver disease such as biliary atresia or Alagille syndrome. Prompt detection is important, because surgical interventions (such as the Kasai procedure) must be performed before 2 months of age to reduce overall morbidity and mortality.3 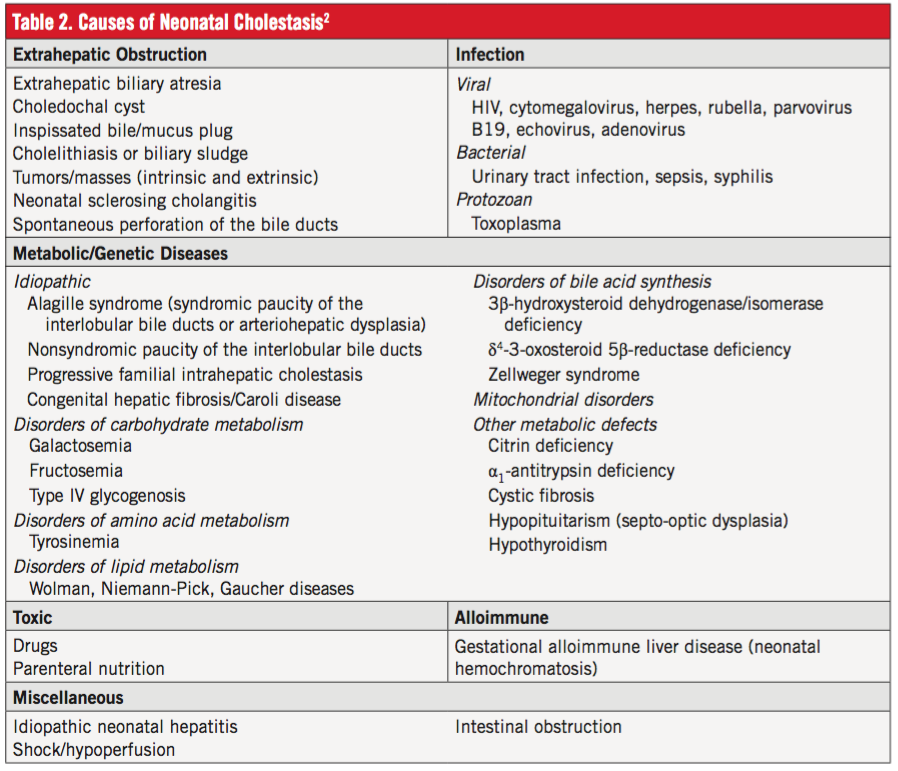 The ductus venosus originates from the umbilical vein and joins the inferior vena cava in a venous confluence just below the level of the right atrium, allowing oxygenated blood to bypass the liver. Like other fetal shunts, it plays an important role in getting oxygenated blood to the fetal brain. In the normal neonate, functional closure occurs minutes after birth, with structural closure occurring within the first week of life, leaving the ligamentum venosum.4

This case illustrates a very unusual cause of cholestasis in a newborn. To the our knowledge, there has only been 1 other pediatric case reported in the literature5—left-sided heart failure in a 10-year-old girl who was discovered to have a patent ductus venosus. In that case, the ductus was ligated surgically, with correction of the portal systemic pressures.5 Rare cases have been reported in the literature of adults presenting with encephalopathy and heart failure but no signs of cirrhosis.5

Treatment is surgical ligation or embolization via cardiac cathertitization.5 These interventions are indicated if a patient is failing to thrive or is having signs of hyperammonemia or worsening hepatic enzyme levels. In our case, the patient was thriving, with no signs of encephalopathy, and at 11 months of age, Doppler ultrasonography showed full closure of the ductus venosus.

Neonatal cholestasis requires right upper quadrant ultrasonography. When a persistent ductus venosus is identified, Doppler ultrasonography studies of the hepatoportal circulation are recommended to assess for portal hypertension, right heart failure, and thrombus. Ammonia level assessment and coagulation studies should be repeated to monitor for encephalopathy and coagulopathy.

Based on our experience, as long as liver enzymes remain normal and intact with bilirubin levels stabilizing, and there is no evidence of portal hypertension, these patients simply can be followed at regular well-child intervals.

Cardiologist input at an early stage is invaluable given the potential need for intervention should liver function decline or heart failure occur. There is very little in the literature about the long-term follow-up of this disorder; thus, it is recommended to continue to follow the cases of healthy patients with serial Doppler ultrasonography of the hepatoportal circulation until the ductus has closed.

Lessons for the Clinician

Elevated conjugated bilirubin (> 20% of total bilirubin) should raise concern for any clinician. Prompt evaluation is required and includes ultrasonography and laboratory studies to further evaluate the cause of the hyperbilirubinemia. Jaundice in an infant older than 2 weeks should raise the suspicion of liver disease or biliary atresia.

Persistent ductus venosus should be monitored initially by assessing infant growth, performing serology tests for ammonia levels and liver enzymes, and watching for any signs of portal hypertension such as liver enlargement.

Because very few cases of patent ductus venosus have been reported, the prudent approach is to perform serial Doppler studies and laboratory tests to follow the course of the ductus until closure, and to intervene if the infant becomes symptomatic.

3.Serinet MO, Wildhaber BE, Broué P, et al. Impact of age at Kasai operation on its results in late childhood and adolescence: a rational basis for biliary atresia screening. Pediatrics. 2009;123(5):1280-1286.