A 17-year-old female presented with a chief concern of abdominal pain associated with multiple episodes of bilious, nonbloody vomiting.

She had been hospitalized 3 times before this visit due to abdominal pain and tenderness in the epigastric region. During the first 2 hospital admissions, she initially had received a diagnosis of gastritis, but the symptoms did not resolve after therapeutic management. She subsequently was hospitalized a third time with sharp, epigastric abdominal pain of 2 days’ duration that had radiated to her back and was associated with bilious vomiting.

On physical examination during the third hospitalization, the patient was jaundiced and had a soft, nondistended abdomen with epigastric tenderness. Laboratory test results were normal except for an elevated lipase level of 240 U/L. The lipase level trended downward to normal over the course of 6 days. Abdominal ultrasonography showed evidence of a biliary sludge. She was discharged after improvement and resolution of acute pancreatitis. 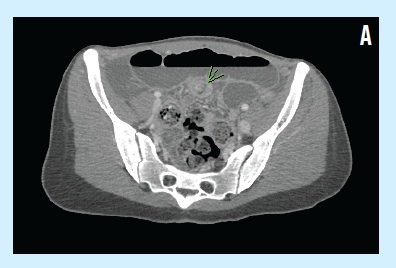 However, 1 month later, she was hospitalized again after presenting with epigastric pain and bilious vomiting for 2 days. A pediatric surgeon was consulted out of concern for possible small bowel obstruction. The patient received nothing by mouth, and an abdominal computed tomography (CT) scan done on the day of admission showed evidence of ileoileal intussusception in the left lower quadrant and resultant small bowel obstruction (A).

A nasogastric tube was inserted for decompression of gastric contents, and 2 enemas were performed. Abdominal radiography results showed that dilated loops of small bowel still were present. A diagnostic laparoscopy was then performed, and excision of an intraluminal small bowel revealed a hard, solid mass of hair (B).

The patient’s symptoms resolved after removal of the trichobezoar, and she was referred to a psychiatrist.

The term bezoar is derived from Arabic bazehr or the Persian panzehr, which originally referred to the hardened contents of a goat’s stomach; bezoars were so named because of the ancient belief that goats have a magic antidote to poisons.1 A trichobezoar is an accumulation of swallowed hair and is the most common bezoar in the pediatric population. Trichobezoars most often present in adolescent females, with more than 90% of them occurring in girls between 15 and 20 years of age.2 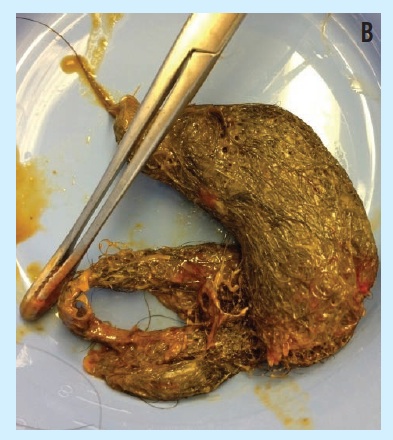 Most patients have either a cognitive delay or a psychiatric disorder such as trichotillomania (pulling out of one’s own hair) or trichophagia (eating of hair). The patient in this case admitted that she had been pulling out her own hair and eating it for approximately the past 5 years.

A trichobezoar may cause abdominal pain and nausea, although it can be asymptomatic. Because of the possibly extended time until symptomatic presentation and diagnosis, complications related to a trichobezoar can include anemia, hematemesis, gastric ulceration, intestinal obstruction, perforation, peritonitis, pancreatitis, obstructive jaundice, intussusception, and appendicitis.

The patient in this case had been hospitalized previously for pancreatitis. Among the possible causes of her pancreatitis were pancreatic or ampullary irritation secondary to the mass, and edematous obstruction from the bezoar tail obstructing the ampulla of Vater.3

She then was hospitalized due to suspicion of a small bowel obstruction, which could have been a direct effect of the bezoar. Intestinal obstruction also can be secondary to intussusception, which was an abdominal CT finding on the day of admission in this patient’s case. No intussusception was identified intraoperatively, however; we hypothesize that it could have resolved after the enemas.

The recommended treatment for a large or complicated trichobezoar is surgical. In this case, an enterotomy was performed for removal.