A 91-year-old man with a medical history significant for atrial fibrillation, osteoarthritis, degenerative joint disease with bilateral hip replacements, and coronary artery disease presented to a clinic with a 2-month history of progressive painless swelling of the left lower extremity. The physical examination revealed severe edema that extended to the hip. There was, however, excellent capillary refill in all extremities, with some scattered ecchymosis (<2 cm in diameter). Swelling and pitting edema were noted in the patient’s left lower extremity (Figure 1); his right lower extremity was more deeply pigmented. He had no fever, chills, or night sweats, and he had not lost any weight. The patient’s hemoglobin level was 9.5 g/dL. His platelet count, prothrombin time, partial thromboplastin time, and creatinine blood level (1.0 mg/dL) were all normal. Doppler ultrasonography was negative for deep vein thrombosis, but a computed tomography (CT) scan of the abdomen revealed a mass >20 cm in diameter adjacent to the left pelvic sidewall (Figure 2). The patient had undergone multiple different biopsies for the same mass over a period of 10 years, but had not consistently followed with one physician over that time period. 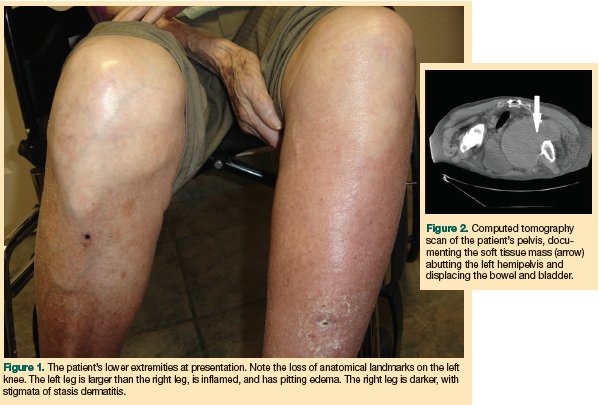 Based on the case description, photograph, and CT scan above, what is your diagnosis?

Answer and Discussion on next page

Despite the presence of central necrosis, a pelvic abscess was unlikely in this patient, as he was afebrile, lacked constitutional symptoms, and did not have leukocytosis (all common symptoms of a pelvic abscess). Osteosarcomas are generally found in patients <35 years of age and therefore was ruled out as a diagnosis. Chondrosarcomas can occur in elderly individuals, but they usually present with much more localized destruction of bony structures and with calcifications on plain film X-rays. With these diagnoses excluded, the differential diagnosis consists of soft tissue sarcoma, lymphoma, Hodgkin’s disease, or pseudotumor. Epithelial neoplasms generally do not grow away from their organ of origin; they present as intraluminal or intravesical lesions. Therefore, if such a tumor originates in the bladder or rectum, it generally will not form a large mass in the abdomen or pelvis. The case patient’s lesion was biopsied, and pathologic examination of the needle biopsy specimen revealed necrosis, signs of chronic and acute inflammation, and no evidence of any foreign material or organisms (Figures 3 and 4). There was no evidence of cytologic atypia or cancer cells from any organ that would indicate a malignancy in this patient. The diagnosis, therefore, is pseudotumor. 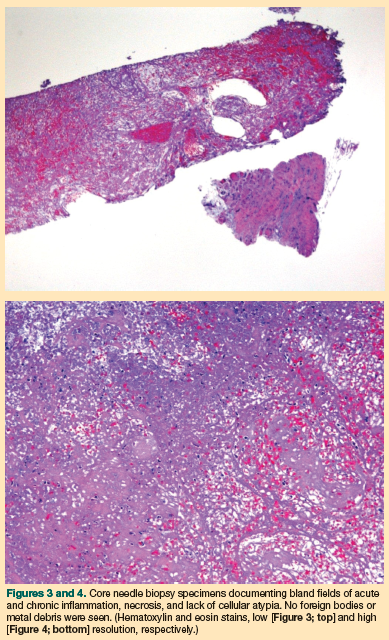 Pseudotumors are generally small, and can occur as a result of chronic inflammation from prosthetic hips. They have become more common in the elderly population as more individuals are undergoing hip replacement. They have been reported to occur in <1% of all patients who have had hip prosthesis,1  with the highest incidence among patients with metal-on-metal prosthetics. Pseudotumors can be locally destructive and can cause swelling in the lower extremities. B symptoms (fevers, chills, night sweats, weight loss) found in hematologic malignancies are absent in individuals with pseudotumors. Destruction of adjacent bony or neural structures can occur; the decision to revise a hip replacement is usually made by the treating orthopedic surgeon and must take into account the severity of the symptoms and the patient’s comorbidities.2 Because pseudotumors are not malignancies, neither chemotherapy nor radiation therapy is recommended. Rather, extensive surgery and revision of the surgical site are often indicated. It was suggested that in thi case, the patient undergo an extensive wide resection—even a hemipelvectomy— but this was rejected by the patient. He continues to thrive otherwise.

The differential diagnosis of pelvic mass lesions in elderly persons includes infections and malignancies. Generally, with infections, patients are quite ill and present with fever and weight loss. With malignancies, however, symptoms may be typified only by chronic pain and swelling. In particular, with low-grade sarcomas, which tend to enlarge slowly, or with lymphomas (either non-Hodgkin’s lymphoma or Hodgkin’s disease), symptoms may be only minimally progressive over a long period of time. Fevers, weight loss, and unilateral or bilateral swelling of the lower extremities can be associated with malignancies. Bladder and bowel incontinence due to compression of the sacral plexus in the presacral region, as well as frank large bowel obstruction and prerenal azotemia secondary to obstruction of the ureters, are also common in individuals with malignancies.

In an elderly patient, the question of whether to biopsy a pelvic mass lesion is, of course, paramount. The case patient had undergone six different biopsies, which were ordered by five different physicians in various specialties and carried out in several different hospitals, before his current presentation at the clinic. Unfortunately, following the philosophical conundrum that a negative biopsy does not rule out the presence of cancer, as well as previous physicians not considering the possibility of a pseudotumor in the differential diagnosis, this patient underwent a series of invasive, unnecessary procedures. Had a diagnosis of pseudotumor been considered in any of his previous presentations—taking into account his age and the presence of hip prostheses— he may have been spared multiple biopsies. Further, the presence of a central repository for medical records might have made the patient’s records easier to access and obviated the need for repeated biopsy procedures.

If the case patient had been found to have a malignancy, what could have been done? Certainly, radiation therapy might have helped a tumor sensitive to this treatment modality. The rigors of chemotherapy and extensive surgery would probably not have been appropriate for a man in his ninth decade of life.

Hip prostheses are increasingly common in our aging population. Postoperative complications include2 :

Masses occurring in close proximity to replacement joints have recently been reported.1  The mechanism of formation is unclear but probably involves inflammation and a hypersensitivity reaction to metal in the replacement joint. Metal-on-metal devices probably pose the greatest risk for pseudotumor formation.3 Length of implant use is likely contributory,4  and the diameter of the implant may also contribute to this risk.5

It is not known how pseudotumor formation can be prevented. These lesions are often necrotic, and inflammatory reactions with associated necrosis are observed, but without the cellular atypia typically seen in malignant lesions on histologic section6 (Figures 3 and 4). Diagnosis of pseudotumors is difficult, as demonstrated in the case patient. In individuals with pseudotumors, the results of positron emission tomography scans can be false-positive because of the inflammation in the pseudotumor.7 Fine needle biopsies of pseudotumors can mimic sarcomas, emphasizing the need to obtain core needle biopsies.8 Infections may be superimposed or may actually contribute to the formation of the pseudotumor itself in some disease models.9

Dr. Gollard is a hematologist/oncologist in private practice in Henderson, NV.