Dr Kamat is professor of pediatrics at Wayne State University in Detroit. He is also director of the Institute of Medical Education and vice chair of education at Children’s Hospital of Michigan, both in Detroit.

A well-nourished 17-year-old of average height and weight was referred for evaluation of persistent right lower leg pain of 3 months' duration. He was not taking any medications, had no allergies, and denied trauma to the area. 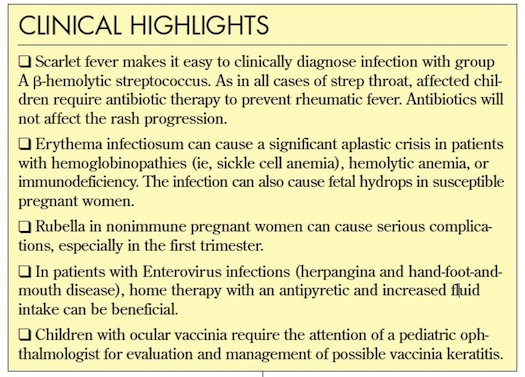 Osteoid osteomas account for about 10% of all benign bone tumors.1 They can arise in any bone. The typical tumor site is the cortical bone, most commonly the tibia and femur.1,2 The tumors develop in immature bones and thus are usually found in persons younger than 20 years. The male-to-female ratio is 2:1.

The tumor is composed of osteoblasts and an osteoid that forms a small (less than 2 cm) radiolucent nidus, which is surrounded by an increased neural and arterial supply. The pain probably results from the increase in neural cells around the nidus; it typically worsens at night and is relieved by NSAIDs or aspirin.2,3 The abnormal growth is likely a response to the increased arterial supply around the nidus; in some patients, this may be palpable.1

Osteoid osteomas can be managed with watchful waiting and NSAIDs as needed, surgical excision and curettage, or radiofrequency (RF) ablation.1 Surgery can be painful and inaccurate identification or incomplete excision of the tumor can lead to recurrence. RF ablation is more widely used and allows for osteonecrosis without injury to the adjacent bone.1

This patient and his parents chose RF ablation. Six months after treatment, he had no symptoms and the lesion had not recurred.