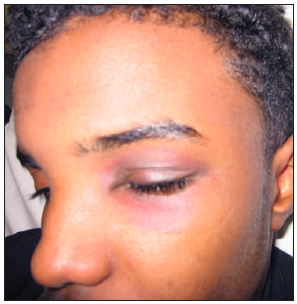 A17-year-old boy who had been struck in the left eye by a glass bottle 3 days earlier presented to the emergency department with orbital bruising, eye pain, and swelling. He reported some blurry vision initially on opening the eye. He denied double vision and had had no bleeding or leakage of clear fluid from his nose. His medical history was unremarkable.

Vital signs were normal. The patient had left-sided periorbital edema with slight ecchymosis and enophthalmos. There was conjunctival injection of the left eye, but no hyphema was noted. Pupils were equal, round, and reactive. Extraocular muscles revealed some restriction with upward gaze. Tympanic membranes were intact without hemotympanum. Nasal and oral examination findings were normal.

A maxillofacial CT scan showed left inferior and medial orbital blowout fractures. The fracture of the left orbital floor was associated with herniation of a significant amount of orbital content, including fat and inferior rectus muscle, into the left maxillary sinus. There was no evidence of facial fracture. Ophthalmology and otolaryngology were consulted, and the patient underwent surgery by a pediatric otolaryngologist after the edema subsided (10 days after the initial injury). During the procedure, the orbital content was reduced— this included release of the inferior rectus muscle, which was entrapped—and the orbital floor was reinforced with an absorbable plate. The patient recovered without any deficits.

High-velocity blunt force to the globe causes the orbital contents to compress and intraorbital pressure to suddenly increase. This transfers the pressure outward toward the weakest part of the orbit—the orbital floor. For this reason, blow-out fractures are most often directed inferiorly, and herniation of intraorbital soft tissues, such as fat and extraocular muscle, into the maxillary antrum is not uncommon. Surgery is indicated for patients with significant enophthalmos (greater than 2 mm), which usually results when more than half of the orbital floor is involved and when there is orbital tissue herniation, with or without concomitant medial wall fracture. 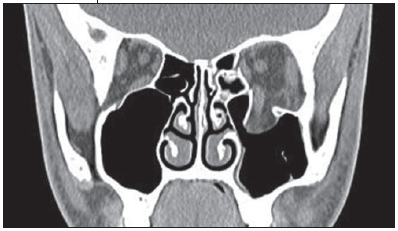 Inferior rectus muscle entrapment may occur in patients with orbital floor blow-out fractures. This can cause limitation in upward and/or downward gaze that may lead to diplopia. Diplopia within 30 degrees of the primary gaze is also an indication for surgery.

Repeated examination by ophthalmology and conservative treatment is usually sufficient for patients with fractures that involve less than half of the orbital floor— those without significant enophthalmos, muscle or tissue entrapment, or diplopia.